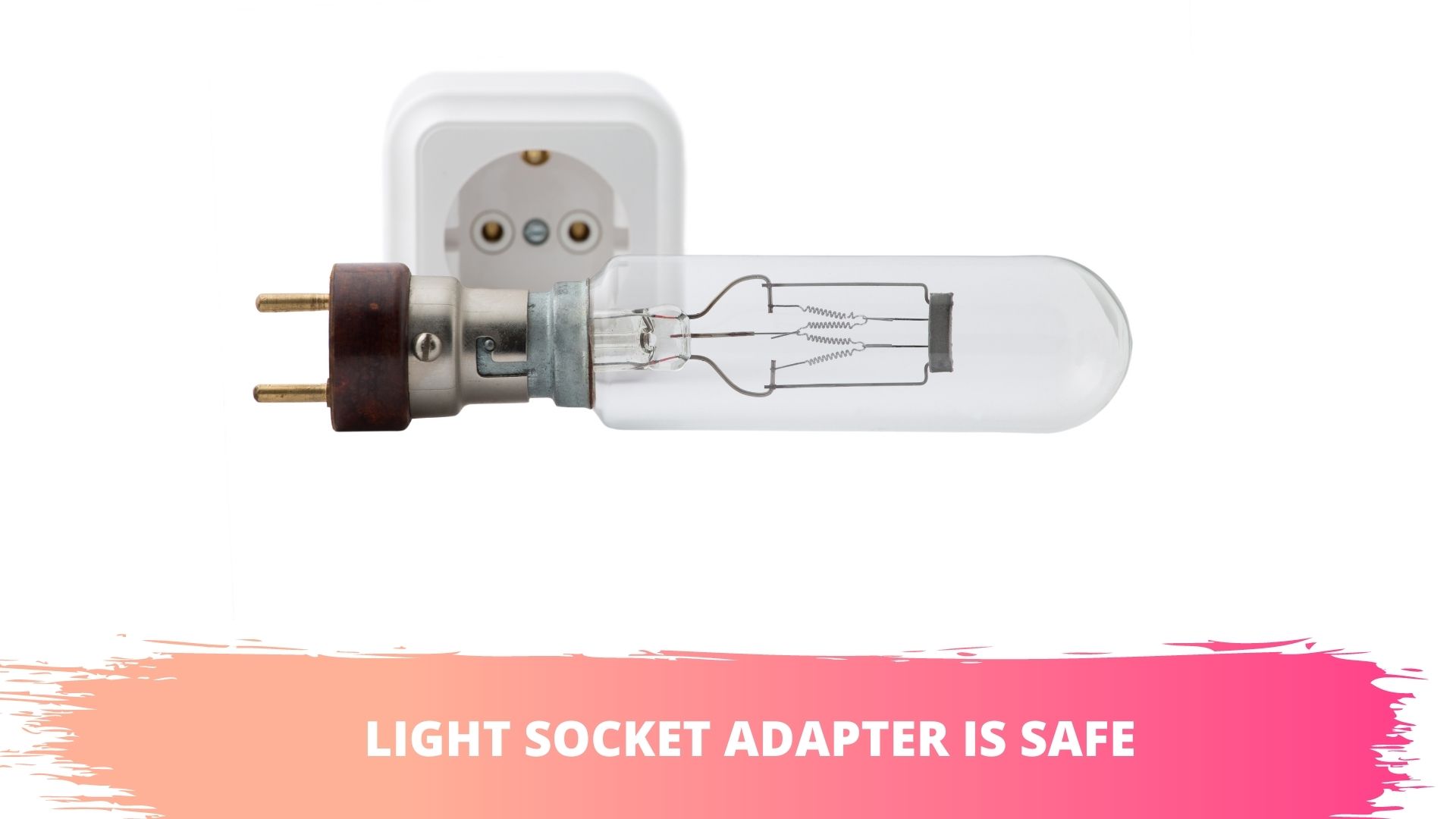 If you don’t have enough sockets in your house, and you don’t want to rely on extension cords, you should consider using light socket adapters, especially if you have light sockets that don’t get much use. Though, as you will soon see, you have to take certain precautions to avoid disaster.

How Safe Are Light Socket Adapters?

For the most part, light socket adapters are safe. However, your success is going to depend on the location of the light socket as well as the load you want it to carry

Light sockets are not meant to carry as much current as ordinary sockets. They are normally designed to handle roughly 60 watts.

This is why placing a 100-watt bulb in a 60-watt socket is so dangerous. Because the socket is transmitting more current than it was designed to handle, it may generate enough heat to melt the components inside the socket.

This creates fire and electrocution hazards. A light socket adapter may replicate this same issue. You cannot use a light socket to power a space heater, a washing machine, or any other heavy-duty appliance.

The wires and connections cannot handle the load. On the other hand, if you want to use the light socket to operate devices such as computers, phones, and lamps that do not consume that much energy, the light socket adapter is perfectly safe.

2). Use It In The Secure Location

Most people use adapters to turn light sockets into outlets because they don’t have enough wall outlets in the area. In other words, they are desperate. They have to make do with the light sockets in the vicinity.

This isn’t a problem if your light sockets are located in a secure location along the wall or even close to the ground. It becomes a problem when a consumer attempts to convert a light socket on the ceiling into an outlet.

To be clear, you can use an adapter on a light socket on the ceiling. Many adapters are designed to accommodate electrical plugs as well as light bulbs. You don’t have to sacrifice the lighting in a given room to turn the light socket on a ceiling into an outlet.

That being said, gravity is an issue in such cases. Electrical plugs that are attached to light sockets on the ceiling are more likely to fall out. Even if they remain in the outlet, the plugs may become loose, falling partially out of the outlet and creating an arcing problem. You have to ensure that the plug is properly secured and supported.

Can You Get Electrocuted From A Light Socket?

A light socket can electrocute you. When you screw a bulb into a socket, the contact points in the socket funnel electricity into the bulb. The bulb turns that current into light. If you remove the bulb and touch those contact points, you will get a shock.

Is It Safe To Leave A Light Socket Empty?

I discourage people from leaving light sockets empty because of the dangers they pose.

If the light socket is on the ceiling, you have nothing to worry about. But if the socket is closer to the ground, a child that doesn’t know better will touch the contact points and the socket will electrocute them.

An empty light socket on the ceiling isn’t an electrocution hazard but it can start a fire. Any dust and lint that touch the contact points could ignite, starting a fire. The same problem can occur if an insect is electrocuted by the socket. If it falls on flammable material such as a newspaper, it could burn your home down.

Homeowners can avoid such problems by leaving a dead bulb in the socket. Dead bulbs are unsightly but it is better than leaving the socket empty. You should also consider covering it with tape.

How To Safely Convert A Light Socket Into An Outlet?

If you have some experience with electricity, you can turn a light socket into an outlet without hiring a professional. All you need is a suitable adapter:

You will realize that the process is longer and more complicated. You may require the services of an electrician who can re-wire the light fixture into an outlet. A lamp holder-to-outlet adapter such as the Leviton 1403 or the GE Polarized Handy Plug is more convenient.

Are The Light Socket To Outlet Adapters Safe For Outdoor Use/Christmas Lights?

If snow and rain never touched the light socket before you converted it into an outlet, it should be safe for your Christmas lights. Otherwise, some people use tape to protect their outdoor light sockets from snow and rain.

You can safely use light socket outlets to operate Christmas lights outside. Christmas lights are unlikely to overload the socket. Though, the NEC expects outdoor receptacles to use GFCI protection. The elements are an important consideration.