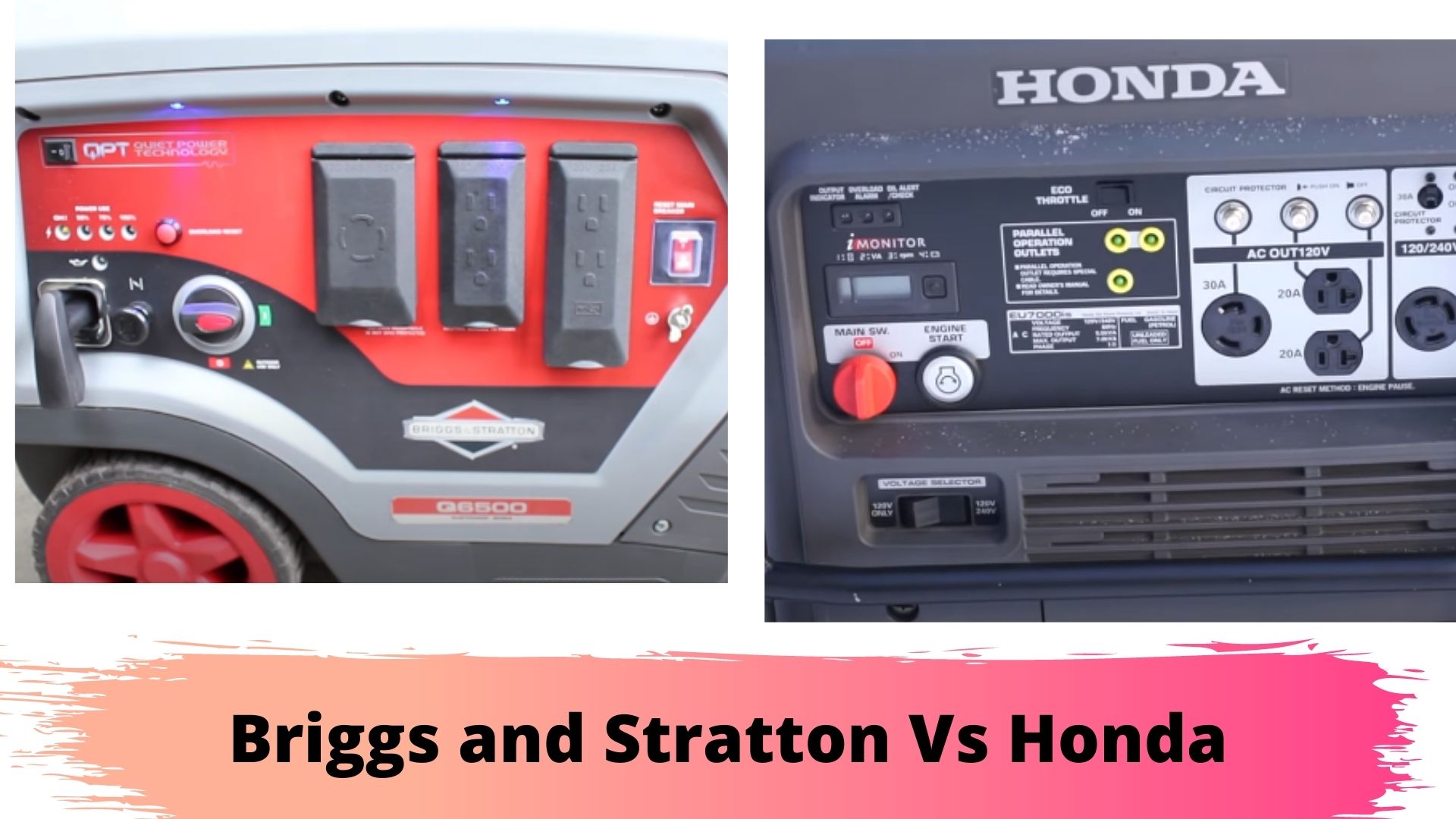 The Briggs and Stratton VS Honda debate has been raging for a while now. Even though the generator market is filled with a variety of manufacturers, people only care about those two brands, which is why they are always comparing and contrasting them against one another.

This is why people are drawn to this debate. They want to know which of the two is better. If that is the reason you came here, you are about to get a few insightful answers.

What is Briggs and Stratton?

This company has been around for over a century. They make all manner of equipment, not just generators but lawnmowers, and pumps. They have a presence in most corners of the globe. They are one of the biggest brands in the world where gasoline engines are concerned.

Started by a pair of inventors, the company has a reputation for producing durable but affordable products.

Like Briggs and Stratton, Honda does not specialize in engines and generators. They are primarily known for their cars. Though, they have built a strong reputation for themselves in the field of generators.

The Company is known for its consistency and reliability. They are not as diverse in their offerings as Briggs and Stratton. They prefer to focus their efforts on a small selection of well-made products.

What You Need to Know About Briggs and Stratton

If you need to know more about Briggs and Stratton before you choose between the two brands, you might find the following interesting:

A lot of people associate with this brand are lawnmowers. They are among the best in the business This should strengthen your trust in them. If they make amazing lawnmowers, it means that their engines are impeccable in quality and design.

Their products are accompanied by healthy warranty and guarantee policies that protect consumers from unnecessary risk. Just consider the Briggs and Stratton Q6500. It has a warranty of 3 years.

The only reason why the brand has survived for over a century is that it has a reputation for being reliable and dependable. This is why people trust their generators. They wouldn’t have remained in operation for this long if their engines were shoddy.

The company is everywhere. Finding a Briggs and Stratton generator isn’t difficult. You can locate their physical stores in various countries around the world. If that wasn’t enough, they have a strong online presence. Their service centers are equally widespread.

What You Need to Know About Honda

As was noted above, Honda is known for its cars. But it also has a solid presence in the generator market. This is what you should know:

Like its competitor, Honda has spent many years producing reliable engines. This is why people trust their generators. The company has several decades of experience in the field.

Machinery Critic cannot get enough of Honda. They love the brand’s products because they are quiet and fuel-efficient. The portable models can work in any setting that suits you, including camping and construction sites. Some of them will adjust the motor speed automatically. Others offer advanced voltage control that eliminates distortion and fluctuation.

Their portable models are particularly popular because they are so lightweight and compact. This makes them easy to transport.

Briggs and Stratton VS Honda

Trying to identify the superior brand between these two isn’t easy because issues of this sort are so subjective. Most people are already biased towards one of these brands. Comparisons between them typically take the following into account:

This is one of the biggest differences separating the two brands. The Briggs and Stratton Q6500 was mentioned before because of its 3-year warranty. You should know that the generator costs $2,999.

This matters because one of the model’s rivals is the Honda EU7000is. The EU7000is is powerful. However, it also costs $6,599 which is twice as much as the Briggs and Stratton model.

Honda has a reputation for making expensive products.Briggs and Stratton, on the other hand, is known for being affordable.

While Briggs and Stratton are known for their affordability, Honda has a reputation for making powerful devices. Briggs and Stratton have plenty of powerful generators in their catalog. However, in many of the comparisons between the two brands, Honda is often praised for having a more powerful product.

Briggs and Stratton always stand out because their product, though less powerful, is cheaper.

You cannot compare the two where issues like weight, decibel rating, and fuel efficiency are concerned. Some Briggs and Stratton generators are really advanced, boasting special functions such as Bluetooth connectivity that allows users to monitor the fuel and run time.

But for the most part, the companies do not differ that drastically where the individual attributes are concerned.

According to CSI Market, Briggs and Stratton are more widespread. Their engines are found in more devices. They have a bigger market share. This can be imputed to the fact that they have so many engine models.

Which is better Honda or Briggs and Stratton

To know which one is better, i will compare Briggs and Stratton Q6500 vs Honda EU7000is

To me personally, if I need power I will go with the Honda otherwise Briggs and Stratton is more preferable in terms of features and reliability.

Your choice between these two brands will depend on your needs.

If all you want is power, you can’t go wrong with Honda. However, Briggs and Stratton have a variety of seemingly weaker alternatives that are not as impressive where the output is concerned but which are not only efficient but affordable.