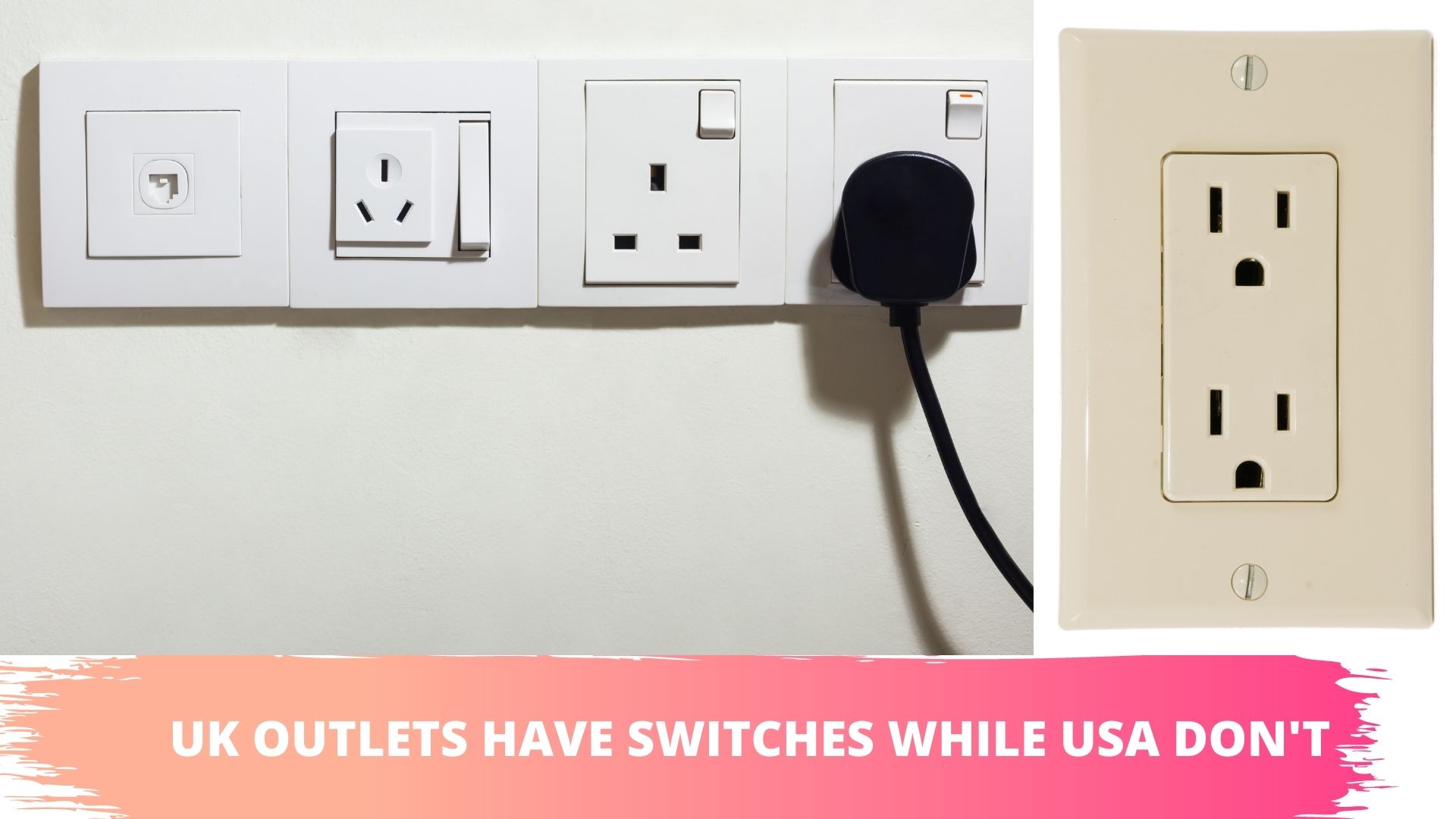 If you live in the United States, your last visit to Europe probably confused you once you realized that countries like the UK had sockets with switches. You probably started wondering whether that configuration was the norm.

British/Australian Sockets do Have Switches While Americans don’t because the UK and Australia use 220 volts to supply power, their citizens are attracted to switched outlets because 220 volts are more likely to kill you than the 110 volts used in the US.

And if outlets with switches were normal, you must have questioned why the sockets in the US did not have switches. Americans that have visited Australia are in a similar boat. They don’t understand why Australian households use sockets with switches.

Which is it? Which outlet is safer? Better yet, why are the sockets in the UK, Australia, and the US so different from one another.

Unswitched outlets don’t have a switch. In other words, they are always on. According to reference, their contacts have a permanent connection to the wiring which ensures that they are always live.

Why Do UK Outlets Have A Switch?

Companies in the UK supply power at 220 volts rather than 110 volts. 220V is more dangerous. The switch acts as an extra layer of security. By allowing homeowners to stop the flow of current before pulling a plug from a socket, they are less likely to die from electrocution if something goes wrong.

Americans adopted the 110V system a long time ago. When Europe embraced conventional electrical solutions, they concluded that 220 V was better because they could use less current despite delivering the same power.

From what TheConversation has found, this allowed Europe to use thinner wires. The UK appreciated the approach because copper wires were so expensive at the time.

More importantly, switches can protect children. If the switch of an outlet is in the ‘OFF’ position, a child can stick metal objects in the slots without suffering any harsh consequences.

Many Americans do not agree with these arguments, which is why some British electricians often respond by pointing out that homes in their country are wired with a ring pattern.

According to Science Focus, the British adopted the ring main system as a response to the copper shortage. They decided to connect outlets sequentially. To respond to dangers that arose from this configuration, along with adding fuses to plugs, they also placed switches on their sockets for safety purposes.

Why UK Plugs Are Safer?

It all comes down to safety. The British government has shown time and time again that it takes safety more seriously than other governments. You can see this in the measures they have taken in the past, which include:

While the US has plenty of grounded plugs, a surprising number of the plugs used in the country feature two prongs. They are not properly grounded. The UK, on the other hand, has gone to great lengths to prioritize three-prong plugs.

Plugs in the UK feature prongs that have an insulation coating. Therefore, you don’t have to worry about electrocution simply because you touched the exposed prong of a plug that wasn’t properly inserted.

Based on what Fast Company has said, it looks like British plugs have a slightly longer grounding prong that is designed to unlock the socket. This prevents naive children from accidentally accessing dangerous terminals (Live and Neutral) using objects like forks.

Clearly, the UK takes electrical safety and security seriously. As such, it is easy to understand why they would adopt switched outlets even though various countries have survived without them for decades.

Why Do Australian Power Points Have Switches?

Australia has adopted switched sockets because they are safer. By flipping the switch to the ‘OFF’ position, you can prevent the current from flowing. This allows children to interact with sockets without suffering any dangerous shocks. It is also worth noting that switched outlets are convenient.

Australia is similar to the UK.

If you have an unswitched outlet, you have to pull the plug out to disconnect an appliance from power. But if the outlet is switched, you don’t have to remove the plug.

Flipping the switch to the ‘OFF’ position is enough to disconnect your appliance. This aspect of switched outlets appeals to people whose sockets are located in places where heavy objects like furniture have been pushed against them.

In other words, pulling the plug out is either difficult or impossible. In such a scenario, knowing that you can still cut the power by simply flipping the switch puts a lot of Australians at ease.

Some people hate the idea of leaving their appliances plugged in. But the practice is safe because flipping the switch to the ‘OFF’ position stops the current from flowing. Vampire energy isn’t an issue either. ABC News in Australia makes this quite clear.

They argue that homeowners can reduce their utility bills by flipping the switch on a socket to the ‘OFF’ position when they are done with an appliance. This will prevent devices that have a Standby Mode from consuming energy.

Why Don’t Americans Have Switched Outlets?

Some Americans will tell you that switches are not necessary. They base their position on various arguments, including:

First of all, while 220 volts are more dangerous than 110 volts, 110 volts can still kill you, especially if the current goes through the heart. And yet, Americans are not necessarily dropping dead every single day because they used an unswitched outlet.

While Australia is somewhat strict where this issue is concerned, there are plenty of unswitched sockets in the UK. Contractors are not legally required to install switched outlets in people’s homes, proving that they are not necessary.

European countries like France use 220V and yet they favour unswitched sockets just like the US. This supports the argument that you don’t need switches to keep people safe.

Many appliances already have switches that you can use to disconnect them from power. For that reason, many Americans believe that an additional switch on the socket is useless.

Do Plug Sockets Have to Have Switches?

People started using switches decades ago to prevent shocks and fires. Electricity was quite dangerous back then. For instance, you could shock yourself while pulling a plug out of a socket. A switch solved this problem by allowing you to switch the power off before you pulled the plug out of the outlet.

Today, the switch serves a similar purpose. While it is easier to pull a plug out of an unswitched outlet, if a malfunction occurs and you cannot touch the plug without getting electrocuted, you could protect yourself and your property by flipping the switch to the ‘OFF’ position.

However, unswitched outlets persist because some people use gadgets that you cannot afford to disconnect from power. That includes medical equipment, alarms, and fire sensors.

If you have installed a device that requires a constant source of power and you cannot wire it to the mains for various reasons, an unswitched socket is the best solution.

Simply put, they both have roles to play. More importantly, you don’t have to choose one over the other.

Den Garden has a guide that shows people how to wire a Half-Hot outlet. This is a socket that has both switched and unswitched sections.

Are Plug Sockets Without Switches Illegal?

Australia has regulations that compel people to use sockets that can be individually controlled by a switch. But there are exceptions. Additionally, in most countries, people can choose to use either switched or unswitched outlets. Unswitched outlets are not illegal.

Countries like the UK and Australia use switched outlets. These are sockets with a switch that can be used to either permit or prohibit the flow of current. They are a safety tool that allows people to disconnect appliances from power without touching the plug.

Americans prefer unswitched outlets because you can power an appliance by simply inserting the plug into the outlet. They are not convinced that switched outlets are safer.