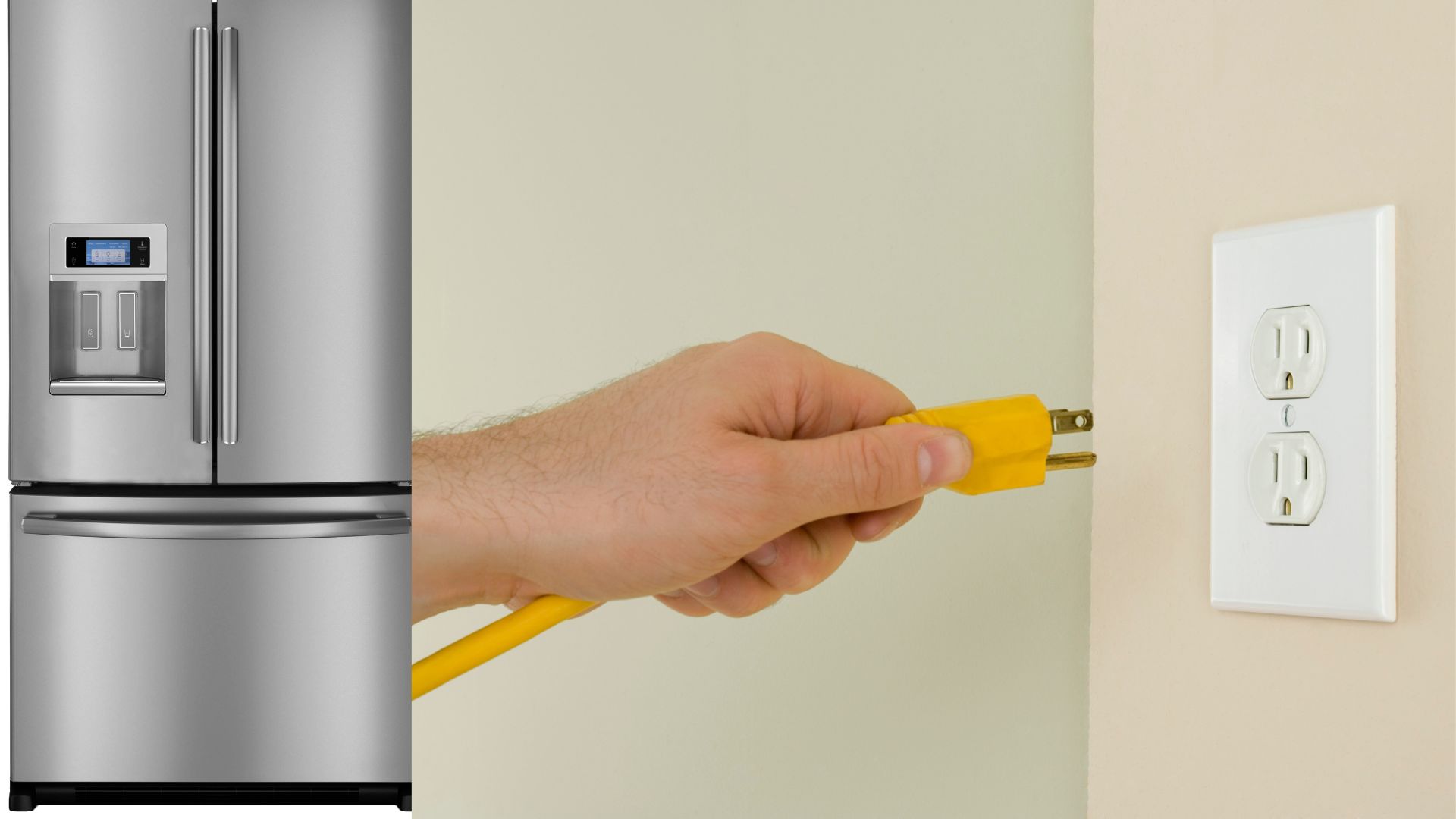 The average refrigerator uses anywhere between 3 and 6 amps, which is far less than the 15 amps you find in many homes.

Can A Refrigerator Run ON A 15 Amp Circuit? A refrigerator can run on a 15 amp circuit if the starting wattage doesn’t exceed 12 amps according to the 80% rule.

Modern appliances are incredibly efficient. They only use a fraction of the power that refrigerators from two decades ago consumed. As far as their circuit size is concerned, you have two significant considerations:

15 amps are a lot for a circuit. However, the NEC doesn’t expect you to use all 15 amps. You have to limit their usage to 80 percent of the circuit size. In other words, you should only use 12 amps on a 15A circuit.

This leaves plenty of room for errors and malfunctions. For instance, the circuit is less likely to overload if an appliance malfunctions. That additional 20 percent will accommodate the elevated electrical draw, but only if the initial load does not exceed 80 percent of the circuit size.

A standard refrigerator will use 3 – 6 amps, but only when it is running. The appliance will multiply its electrical draw by six or more times when it starts. It can easily pull 15 amps during those first few seconds, breaking the 80 percent rule.

Some refrigerators will use more than 15 amps during the starting phase. If your 15A breaker trips whenever the fridge starts, the appliance has a higher starting amperage than the circuit.

You’re better off getting a dedicated 20A circuit. A 20A circuit gives you 16 amps to use once you apply the 80 percent rule. But you can still overload the circuit if you have other appliances on the circuit.

How To Determine The Correct Outlet Size For Refrigerator?

As with the previous question, you should start by identifying the number of amps the appliance uses, a process that involves the following:

1). Check The Nameplate On The Fridge

2). Check The Manual For The Fridge’s Specs.

Again, pay close attention to the starting wattage. In the absence of a manual, use the serial or model number to find the appliance on the internet. I recommend you find the energy star rating.

The energy meter looks like an outlet. Plug the energy meter into the wall receptacle before connecting the appliance. It will track the fridge’s energy usage. People use energy meters to determine and lower their power consumption. The devices are inexpensive.

It is worth noting that contractors occasionally install 15A outlets on 20A circuits and vice versa. Common sense tells people to plug their refrigerator into any outlet they find in the home because the outlet size tends to match the circuit size.

In other words, if you have a 20A circuit that comfortably accommodates the appliance, you can expect the 20A outlets to do the same. But the 80 percent rule expects consumers to only use 16 amps on a 20A circuit.

As such, I don’t see anything wrong with putting a 15A receptacle on a 20A circuit. You can also run a refrigerator on a 15A receptacle so long as the running and starting amps are less than 15A.

Homeowners usually leave these decisions to professional electricians. If an electrician trusts the circuit they installed to suit your fridge, the outlets they added will operate the appliance without creating malfunctions or overloads.

What If I Undersize Circuit For Refrigerator?

You will overload the circuit. The electrical wiring in your house is designed to transmit a limited volume of electricity. Exceeding that volume leads to overheating. Electricity produces heat as it flows through a medium.

That heat is manageable under ideal circumstances. But you will start a fire if you exceed the conductor’s threshold. This is why breakers are so important. If the circuit is undersized, the breaker will trip to cut the power once you start the refrigerator.

It is an inconvenience because it deprives the circuit of power. However, it also prevents overheating. This creates two problems for you.

In the best-case scenario, the breaker will trip whenever the appliance starts.

In the worst-case scenario, the breaker will fail, and a fire will start because the wires are too small to safely transmit the current the refrigerator requires.

You can read the best gauge wire for refrigerators here!

What About Oversizing Circuit For Refrigerator?

Oversizing a circuit has no downsides. If anything, it is the better option because it prevents nuisance tripping and overloads.

Naturally, you will spend more money than necessary because larger circuits use thicker wires that cost more money. But that expense is worth it to protect your home. Additionally, an oversized circuit allows you to make upgrades in the future.

An oversized breaker is a different case. This means that the breaker is larger than the circuit, which is problematic because you cannot trust the breaker to respond to an overload. The wires will overheat and melt before the breaker takes action.

Even if you can lower the energy consumption to prevent overheating, oversizing a circuit breaker is illegal. The local authorities will penalize you. Make sure the circuit and breaker size match.

A refrigerator can run on a shared circuit. Your biggest concern is overloading. But that only happens when the total load exceeds the circuit size. Keep in mind that a refrigerator uses 3 – 6 amps. Those figures can spike to 15 amps during start-up.

But that isn’t a problem for homes with 30 or 40-amp circuits. You can run as many appliances as you want on the same circuit if the circuit is large enough. However, if you have a conventional 15A or 20A circuit, a dedicated circuit is the safest option.

Your local code is unlikely to mandate the use of dedicated circuits for fridges. However, sharing a circuit between fridges and other heavy-duty appliances increases the risk of overloading and overheating.

If you must share the refrigerator’s circuit, pay attention to the other loads. Stick to low-duty devices such as phones and computers that won’t strain the circuit. If the breaker is reliable and properly sized, it will defend against overheating. But you shouldn’t take any chances.

Can A Refrigerator Run On A 20 Amp Circuit?

Yes, it can. You need the largest circuit available to prevent heavy-duty devices like fridges and freezers from causing an overload. And in the conventional home, your options are typically limited to 15 and 20A circuits.

Even when you apply the 80 percent rule, a 20A outlet gives you 16 amps to use, which is enough to accommodate a refrigerator’s starting wattage. The refrigerator’s wattage is the deciding factor.

Some refrigerators are too powerful to run on a 20A circuit, especially commercial models. Use the wattage on the plate to find the amps. Many people use online tools to perform these calculations, but you can divide the watts by the volts yourself to get the amps.

So long as the starting and running watts are lower than 20 amps, you have nothing to worry about. Although, depending on the amperage of the fridge, you should consider disconnecting all the other devices on the circuit during the starting phase.

Wait for the refrigerator’s energy consumption to spike temporarily. Once it settles back down, you can reconnect the other devices.

15 VS 20 Amp Outlet For Refrigerator

The outlet rating should match the circuit size. In other words, you typically find 15A outlets on 15A circuits and 20A outlets on 20A circuits. If your refrigerator can run on a 15A circuit, the 15A outlet will accommodate the appliance.