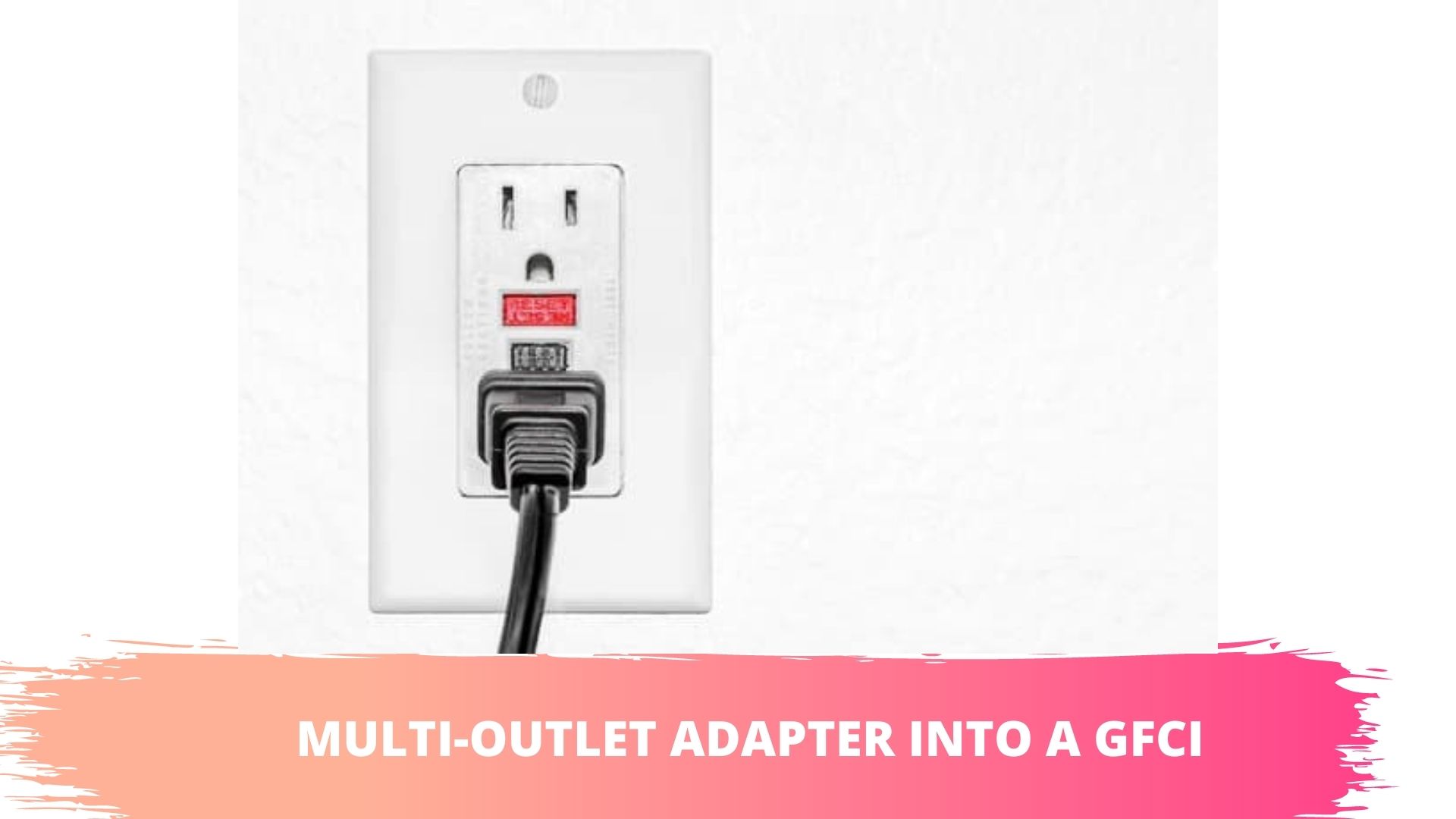 Multi-outlet adapters are similar to power strips in the sense that they multiply the number of outlets at your disposal. GFCI receptacles are very useful. They protect consumers by shutting the power to their outlets off whenever they detect a ground fault.

Can I Plug A Multi-Outlet Adapter Into A GFCI Outlet?

Yes, you can. Where GFCI outlets are concerned, multi-outlet adapters are perfectly safe. There is no reason why this practice would present a risk. Though, the size of the adapter matters. Some adapters are so wide that their body covers the GFCI outlet’s entire face.

This is a problem because it prevents you from seeing or touching the ‘Test’ and ‘Reset’ buttons on the GFCI outlet. In other words, if the GFCI outlet trips, you have to remove the adapter to reset it. However, this is more of an inconvenience than a serious issue.

The NEC doesn’t say anything about the use of adapters and GFCI outlets, and neither does the fire code. So you are in the clear. Of course, your local authority might have a regulation that differs from the NEC. Check with them if you have any doubts, especially if you want to use this configuration in a commercial setting.

Can I Plug A Surge Protector Into A GFCI Outlet?

Surge protectors are not a threat to the functions of a GFCI outlet. That being said, if you have multiple appliances attached to the surge protector, if the GFCI outlet trips, it will disconnect all of them. This might present a challenge if you have an appliance that has to follow a particular shut down procedure before you disconnect it from power.

Admittedly, a surge protector can also protect people. However, the primary role of the device is to prevent surges from reaching the appliances and gadgets attached to its outlets.

It detects changes in the flow of current, taking steps to disconnect the power to its outlets whenever the electricity flows through the wrong conductor. For instance, if faulty wiring causes the electricity in a connected appliance to flow through your body, the GFCI receptacle will detect and respond to this interruption by cutting the power.

Some people will argue that both devices serve a similar purpose because surges can start fires. They can also lead to electrocution. In that regard, surge protectors also save human lives. But that is not their main role.

On the other hand, a GFCI outlet doesn’t offer surge protection. It cannot protect your equipment from electrical surges. Therefore, you can probably understand why a consumer would choose to plug a surge protector into a GFCI outlet.

Will A Surge Protector Keep My GFCI Outlet From Tripping?

The same thing can happen because of an overload. GFCIs are designed to handle a certain amount of amps. According to PurSolar and Electrical, a GFCI outlet can trip because several devices are drawing too much power from the circuit. You can cause this outcome quite easily by plugging too many power-hungry appliances into the surge protector before attaching it to the GFCI outlet. Don’t count on the surge protector to prevent the GFCI outlet from tripping. It cannot play this role.

Can I Plug A Power Strip Into A GFCI Outlet?

Power strips are no different from surge protectors, that is to say, they are not a threat to GFCI outlets and neither will the GFCI outlet affect their ability to operate. A power strip can cause a trip in the GFCI if you overload it with power-hungry appliances.

You should also realize that a tripping GFCI outlet will deprive all the appliances connected to the power strip of power. This may damage sensitive devices that have to be shut down slowly and carefully.

However, besides these inconvenient and indirect consequences, you have nothing to worry about where GFCI outlets and power strips are concerned.

Can You Plug An Extension Cord Into A GFCI Outlet?

Yes, you can. This practice isn’t dangerous. It doesn’t differ that drastically from plugging a multi-outlet adapter, surge protector, or power strip into a GFCI outlet. The GFCI outlet will offer GFCI protection to the extension cord.

It is the perfect solution for contractors that have to work in wet or damp locations that normally expose their appliances to moisture.

What Should Not Be Plugged Into A GFCI Outlet?

Some appliances and gadgets are not compatible with hard shutdowns and the sudden absence of electricity can harm them. That being said, most of these inconveniences are rare. Most people pair GFCI outlets with these devices without suffering any consequences as a result.

Can I Plug My TV Into A GFCI Outlet?

You can plug your TV into a GFCI outlet. This is not an NEC or OSHA requirement but you can do it if you want. Though, television sets can cause false tripping in the GFCI outlet, for instance, in situations that involve 2-wire ungrounded TVs.

A GFCI outlet responds when it detects an imbalance in the incoming and outgoing current. However, some television sets cause similar imbalances by design. That being said, in most situations, a TV set isn’t an issue. Unless it has malfunctioned, your TV is unlikely to cause problems for your GFCI outlet or vice versa.

Can I Plug A Treadmill Into A GFCI Outlet?

The two devices are not compatible with one another. The fact that treadmills disperse static electricity using the ground prong on the outlet. This makes them more likely to trip the GFCI.

Many homeowners keep their treadmills in the garage. This is one of the places that is supposed to use GFCI outlets. However, that doesn’t mean you should plug your treadmill into a GFCI outlet.

How To Use A Treadmill With GFCI Outlet?

Many treadmills clearly state in their instructions that you cannot plug them into a GFCI receptacle because they will trigger it. You are better off plugging the treadmill into a different outlet, preferably one that doesn’t have GFCI protection.

Can I Plug A Space Heater Into A GFCI Outlet?

Most manufacturers discourage people from plugging space heaters into GFCI outlets or anything else that isn’t an ordinary wall outlet. They argue that any layer you add increases the resistance, elevating the chances of a fire starting and the circuit overloading.

But if your space heater is located in any location where a GFCI outlet is required, such as a bathroom, MSN expects you to use GFCI outlets. In other words, use the GFCI outlet when you need it and remove it from the equation once it becomes unnecessary.

Can I Plug A Microwave Into A GFCI Outlet?

A microwave would trigger the GFCI outlet, which is why I don’t want consumers to plug the appliance into a GFCI outlet. However, I expect you to use a GFCI outlet if you intend to position the microwave within six feet of a water source.

More than likely, this isn’t a problem. You can safely use a microwave while it is plugged into a GFCI outlet. However, the microwave needs a dedicated circuit.

Does A Washing Machine Need A GFCI Outlet?

The National Electric Code expects all laundry areas to use GFCI outlets. Therefore, if your washing machine is in a laundry area, you can plug it into a GFCI outlet.

Can I Plug A GFCI Cord Into A GFCI Outlet?

Yes, you can. They won’t interfere with one another. Some hair dryers have plugs with GFCI protection and yet you can attach them to a GFCI outlet without disrupting the outlet or the plug. A GFCI cord and outlet are no different.

Can You Plug A Block Heater Into A GFCI Outlet?

You can plug a block heater into a GFCI outlet. However, they have a reputation for tripping GFCI outlets.

Why Does My Block Heater Trip My GFCI?

A block heater can trip a GFCI for any number of reasons. In some cases, the wiring is faulty. In other cases, consumers have bad connections on their hands. On a number of occasions, the use of long extension cords (with relatively high current loads) is to blame.

Does A Garbage Disposal Need To Be On GFCI?

National Electric Code does not expect consumers to apply GFCI protection to garbage disposals. You can use a GFCI outlet if you want to. But it isn’t a legal requirement at the moment.

Will A Garbage Disposal Trip A GFCI?

A garbage disposal can trip a GFCI if a ground fault occurs between the appliance and the GFCI. It is also quite common for motor-based devices to trigger GFCIs.

Can I Plug A UPS Into A GFCI Outlet?

Yes, you can. However, if the UPS is downstream, the GFCI becomes useless. The GFCI will cut the power in the event of a ground fault but the UPS will kick in and supply power to the fault all the same.

Can You Plug A Computer Into A GFCI Outlet?

You can plug a computer into a GFCI outlet. However, if the GFCI trips for any reason, the hard shutdown could harm your desktop. This isn’t an issue if you have a UPS.

GFCI outlets are supposed to prevent electrocutions by cutting the power when they detect an imbalance in the flow of current. Such imbalances happen whenever the current leaves its pre-determined path to flow through a new conductor such as water or a person.

But even though GFCI receptacles play an important role, they don’t always offer outlets in sufficient numbers, which is why people use multi-outlet adapters, power strips, extension cords, and surge, protectors.

You can use all these devices to increase the reach of your outlet, the number of outlets at your disposal; and to offer surge protection to your appliances without suffering any consequences.

It is also worth noting that surges can cause current leaks in surge protectors which, in turn, can cause the GFCI to trip. And when the GFCI outlet trips, it will kill the power to the appliances attached to all these devices, forcing them to shut down.