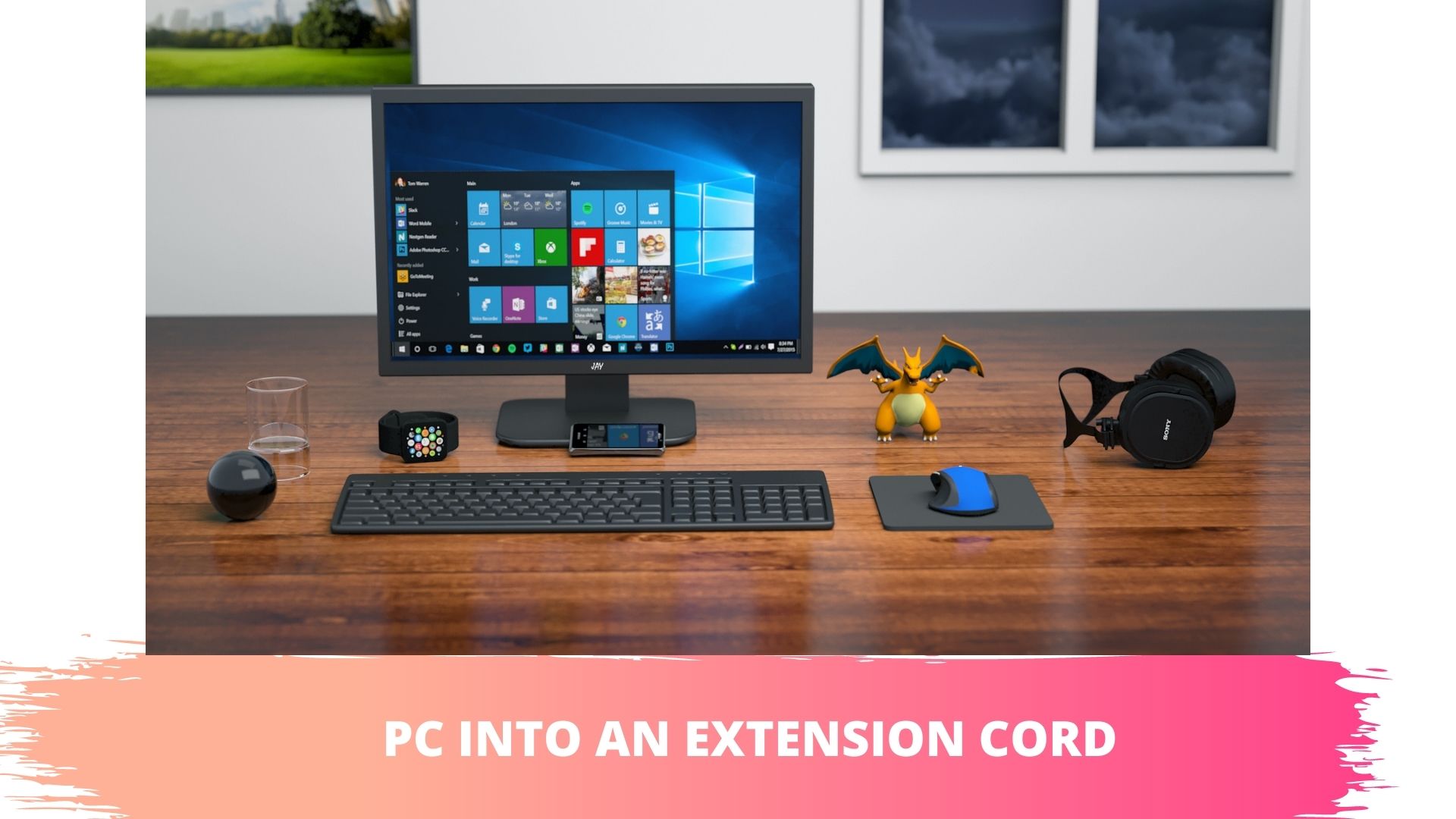 People use extension cords for everything from clocks and lamps to television sets and even power tools like corded drills. They are convenient. However, some people are hesitant to plug computers into extension cords. Can you plug a pc into an extension cord?

You can plug a PC into an extension cord. But it must match the amperage rating of the PC. It will power the PC without exposing the user to risks such as fires and electrocutions.

Still, people are afraid that the practice will destroy their machines in the long run because computers have several sensitive components.

They cannot help but wonder whether they wouldn’t be better off plugging their computers directly into a wall outlet. In truth, extension cords are not a problem. At the end of the day, it is always better to plug a computer into a wall outlet.

But an extension cord is unlikely to harm your PC. Though, if you are tempted to plug the machine into an extension cord, you have to take various factors into account. Otherwise, you run the risk of overloading the extension cord. Keep reading if you want to know more.

Can I Plug a PC into an Extension Cord?

Yes, you can plug a PC into an extension cord because computers do not draw enough current to present a danger.

That applies to laptops, desktops, and Mac computers. In fact, computer owners do this so frequently that many people don’t even question the practice.

If you plug a PC into an extension cord that matches its amperage rating, the extension cord will power the PC without exposing the user to risks such as fires and electrocutions.

Certain extension cords are better than others. They can accommodate more current and they offer less resistance.

Some professionals, such as Rick from Rick’s Daily Tips, caution against the use of extension cords, especially where computers are concerned.

They are convinced that extension cords present an unacceptable level of risk, regardless of the length and rating.

However, the number of people that have safely plugged computers into extension cords is so large that one cannot help but dismiss such warnings. So long as the specifications of the extension cord match the amperage rating of your PC, you have nothing to worry about.

Should I Use A Power Strip, Extension Cord, or Surge Protector?

Despite what some people think, and even though the terms are normally used interchangeably, these three devices are not the same:

1). Extension Cord – An extension cord extends the reach of a wall outlet. According to Wire Craft, it has at least one socket.

2). Power Strip – While an extension cord extends a wall outlet’s reach, a power strip increases the number of outlets at your disposal. If you have a power strip, you can use one wall receptacle to power multiple appliances.

3). Surge Protector – A surge protector is a power strip or an extension cord with surge protection capabilities. It responds to spikes in voltage by diverting the excess current away from the appliances attached to one or more of its sockets.

If you have to plug your PC into one of these devices, the surge protector is your best option. Not only does it allow you to operate computers that are far from the wall outlet but it can protect the machine from surges.

If the surge protector isn’t an option, then the extension cord is the next best thing, especially if it has a small collection of sockets. Because power strips have so many outlets, you are more likely to overload them by attaching an abundance of appliances, an occurrence that can lead to fires and electrocutions.

An extension cord with one or two sockets is less of an issue because you are more likely to dedicate its small collection of outlets to one PC.

Of course, in an ideal situation, you are better off using a UPS. It offers backup power as well as surge protection. Plug the computer into the UPS and then plug the UPS into the wall outlet.

How can you identify the best extension cord for PC? Some people prioritize the brand, which makes some sense. Some brands have a reputation for producing only the highest quality merchandise.

But what happens when your brand of choice becomes scarce? Are you going to abandon extension cords altogether? In truth, you can find decent extension cords in a variety of brands. The key is to learn to differentiate between good and bad extension cords. Where your PC is concerned, you have to keep the following factors in mind:

Before you buy an extension cord, make sure it has been certified by a recognizable body. An extension cord should have logos like ‘CSA’ and ‘UL’. Organizations like Underwriters Laboratories (UL) vet products such as extension cords to authenticate their quality.

If your extension cord of choice has been certified, you can trust it to perform as the manufacturer has promised.

Their capacity is designed to match the specs of your home’s circuit. Therefore, it wouldn’t be an exaggeration to say that the average power strip or extension cord can cater to the power requirements of the average PC without overloading.

That being said, you shouldn’t make this assumption.

The capacity of the extension cord should exceed the total load of all the devices you want to plug into the extension cord’s sockets. That includes the amperage of any additional speakers and monitors you have on hand.

The gauge determines the thickness of the extension cord, not to mention the amount of current it can carry.

You need an extension cord that is thick enough to carry all the power the PC needs to operate. The length of the cord affects the gauge.

I’ve found the SouthWire Extension cord to be best for computers. If you are interested, check out the price at Amazon!

What Gauge Extension Cord is best for Computers?

Some people may encourage you to buy 10-gauge cords just to be on the safe side. But most computers do not require extension cords that thick.

The gauge is identified by a number. The lower the number, the higher the gauge. For instance, a 14-gauge cord is thicker than an 18-gauge cord. It also carries more current. In many cases, you want the highest gauge possible because it carries more electricity.

But you cannot ignore the length. The longer the cord, the more resistance the current will encounter, the greater the voltage drop. What does this mean?

To minimize the voltage drop, a longer cord requires a higher gauge.

How does this affect your computer? Spruce believes that the average PC requires medium-duty extension cords with a gauge ranging from 16 to 12 AWG. The actual gauge will depend on the length.

Gizmodo wants PC owners to keep the grounding in mind. Make sure your extension cord has three prongs. This adds an extra layer of safety.

How Can I Tell That I’ve Chosen The Wrong Extension Cord?

Most purchases are a gamble. Even the most trustworthy brand can produce defective products on occasion. Don’t assume that every extension cord you buy will perform its role exactly as its manufacturer promised.

Even if you have a heavy-duty 10-gauge cord on your hands, a fault in the device’s hardware could jeopardize your life and your PC. This is why you are encouraged to keep an eye on the extension cord, especially during the first few days.

Touch the plug in the wall outlet every once in a while. You have nothing to worry about if the plug is warm. However, if it is hot, 69News expects you to take it as a sign that the extension cord is overloading.

At this point, you should unplug it before it starts a fire. While malfunctioning extension cords can be repaired, you are better off getting a new one. Don’t take chances with extension cords.

Can I Plug a computer/laptop Into an Extension Cord? Yes, you can. This practice is perfectly safe. It only becomes a problem when you overload the extension cord by either using a model whose capacity doesn’t match the rating of the PC or plugging too many appliances into the extension cord.

If you get a 16 to 12-gauge 15 or 20-Amp 120V extension cord, you can plug your PC into its outlets without facing any consequences. So long as the gauge and rating are correct, you have nothing to worry about.