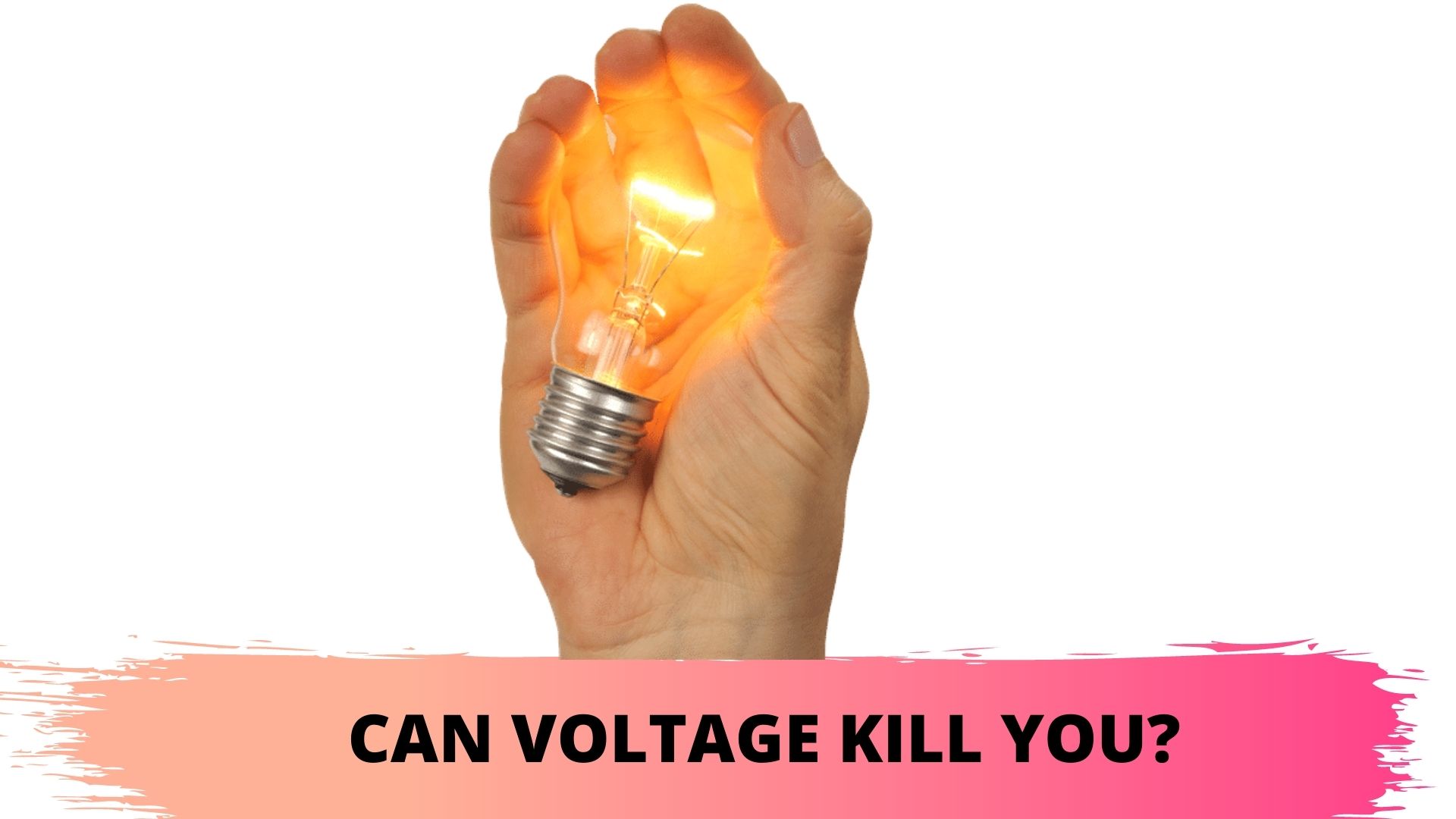 Can voltage kill you? This is one of those questions that homeowners are always asking, especially if they have a lot of appliances lying around. The answer is somewhat difficult to comprehend for the uninitiated because it isn’t a simple matter of saying ‘Yes’ or ‘No’.

You need to understand what voltage is and its connection to current and resistance before you can determine the impact it has on the human body. This guide will attempt to explain those terms. And once you know what they mean, you will understand the role voltage plays and whether or not it can kill.

Can Voltage Kill You?

Voltage doesn’t kill. It is the current that you must worry about. But what does any of that even mean? The New York Committee for Occupational Safety and Health elaborates on that statement by first explaining the relationship between voltage, current, and resistance:

To calculate the current, you take the voltage and divide it by the ohms. Your understanding of that equation matters.

As was mentioned above, the deadliest aspect of electricity is the current, the flow of electrons through the body. The higher the amps flowing through the body, the greater the harm suffered. This might lead some people to conclude that the voltage is completely irrelevant. But that isn’t true.

The voltage is the force that pushes the current through the body. ACME compares voltage and current to a garden hose and a tap. The voltage, the potential for electrical flow, is like the mechanism that allows water to flow, including the water pressure and the mains.

The current is the flow of water through the hose. If you have a garden hose with water pressure, the potential for water to flow is present. But that doesn’t necessarily mean that water is flowing. This applies to the voltage.

If the current isn’t flowing, the voltage isn’t going to do anything. You need current to flow for your body to suffer harm. However, you also need the voltage (the pressure) to push the current through the human body.

It is clear that the flowing current is the primary cause of injury and death.

However, you need the voltage to drive the current through the body. Therefore, voltage is more than capable of killing. Ultimately, you cannot have one without the other.

How Much Voltage is Dangerous?

While voltage is a contributing factor to electrocution, the current is the most critical aspect.

Most professionals recognize that lower voltages are less dangerous than higher voltages. A 9v battery cannot kill a human even when you place it on the tongue because there simply isn’t enough current flowing through the body.

On the other hand, a 120-Volt appliance is more than capable of taking human life because it has the capacity to push lethal levels of electricity through the body.

That suggests that higher voltages are clearly more dangerous. You cannot dismiss them simply because the current is the most critical aspect of electrocution.

I discourage you from presuming that ten thousand volts are more dangerous than a hundred volts. After all, static electricity has tens of thousands of volts and yet it doesn’t have a reputation for killing people because that high voltage doesn’t translate into large amounts of current flowing through the body.

What does all this mean? Technically speaking, you cannot pinpoint a specific figure beyond which voltage becomes dangerous because that figure won’t tell you anything about the current flowing through the human body.

However, I encourage you to operate cautiously around 50 volts or more because they will permit dangerous amounts of current to flow, amounts that can kill.

How Much Voltage Can a Human Body Handle?

Again, it is worth reiterating the fact that the current kills, not the voltage. With that mind, the human body will react to 1 mA of AC (5 mA DC). That is the minimum current you can feel. But it won’t kill you.

You can expect severe shocks at 10 mA, though it probably won’t kill you either. Muscular contractions will occur at 100mA. The risk of death is highest when the current exceeds 1000mA. At this point, if you are holding an electrical wire, the muscle contractions will prevent you from letting go.

Ventricular fibrillation will also occur. This can lead to death. Beyond this threshold, burns will occur. You will eventually lose consciousness. Some people will die from exposure to 10mA of current.

Others might require 1000mA or more before their bodies surrender. It ultimately depends on the resistance. As far as the voltage is concerned,  even 42 volts can present a danger.

Household items of 110 volts electrocute people all the time. Therefore, 120 volts can definitely kill you.

You need voltage for the current to flow. In other words, people that keep asking whether 220 volts can kill you are trying to determine whether that voltage can allow a fatal amount of electricity to flow through your body.

As was noted before, a voltage as low as 42 volts can kill. I also believe that any voltage around 100v can prove fatal. Therefore, 220 volts, which exceeds both 42v and 100v, can easily kill a person.

Do volts or amps kill you?

Amps are the real killer. The body cannot suffer injury unless current flows through it. Volts have an important role to play. However, amps do all the killing.

This is an important question that confuses people that don’t understand electricity. They use ‘volts’ and ‘amps‘ interchangeably because they think that both terms refer to the same thing.

However, that isn’t true. As the name suggests, volts are associated with the voltage. Amps, on the other hand, measure the current. Voltage and current go hand in hand. And practically speaking, they are both dangerous.

Of course, that explanation won’t make any sense if you don’t understand the relationship between amps and volts. This guide will attempt to fill the gaps in your knowledge where voltage and current are concerned.

The Relationship Between Voltage and Current

The idea that current, rather than voltage, is responsible for killing people is fairly common. But what does that actually mean? The term ‘current’ refers to the flow of electricity. When electricity moves through the body, it results in negative consequences such as burnt tissue and paralyzed muscles.

If the current is the stuff that flows, how does voltage fit into this equation? Current cannot flow on its own. It needs a push. The voltage is that force that draws the current through a medium such as the human body.

The amount of volts matters because it will affect the number of amps that can flow through a medium. The higher the volts, the greater the current that can flow.

Why Does the Resistance Matter?

Which is the Killer, Current, or Voltage?

However, the body’s resistance will reduce the amount of current that can flow through you. This, in turn, can reduce its lethality. Factors such as body fat are going to affect the resistance. The same goes for the dryness of the skin.

For instance, a person with dry skin is associated with roughly a hundred thousand ohms of resistance. That makes them less likely to die in the presence of 120 volts. A person with wet skin, on the other hand, is more vulnerable because their resistance has fallen to a thousand ohms.

From Dave Dribin’s perspective, 120 volts is more than capable of killing such an individual. It is worth noting that a high voltage will allow a current to overcome greater resistance.

In that regard, you can see how some people might conclude that the voltage is the real killer. After all, effective resistance in a medium could render a current harmless. But if you raise the voltage, that will give the current the potency required to do serious harm.

In other words, amps and volts go hand in hand. Yes, the current is the component that kills. But it has to work with the voltage. You cannot separate the two.

Most professionals will tell you that it is quite difficult to specify a particular threshold beyond which the voltage becomes dangerous. This, in turn, makes it difficult to identify the voltage that is safe for the human body.

Naturally, you can probably presume that 9v is safe because a 9v battery cannot kill a person. But what about 50v or 100v? Are they safe? That question is difficult to answer. I will tell you that an electrical shock’s ability to cause injury will depend on a variety of factors, including:

1). The most important element is the current. The higher the current, the more lethal the shock. Though, considerations like voltage and resistance also matter.

2). The duration of the shock is just as important. The more time the current spends flowing through you, the more damage it can do. Even if your body has a high resistance for one reason or another, the damage a current does if it is allowed to continue flowing will wear your body down as it breaks your skin and burns tissue, reducing the resistance and doing more damage in the long run.

3). The pathway the current follows is critical. A few amps through the finger won’t do much. But that same current through the heart can lead to death.

4). Ultimately, you have to take the voltage into account because it will affect the volume of the current flowing through your body. A high voltage can counter the resistance of your skin, allowing the current to do more harm.

Because so many factors affect the potency of an electrical shock, a voltage that might be safe for one person could prove to be quite lethal for another depending on their circumstances. This is why it is so difficult to identify a safe voltage for the human body.

Can 5 Amps Kill You?

The human body can detect 1mA of current. So 5 amps won’t go unnoticed. That is roughly half of what an electric socket can produce. Admittedly, 5 amps don’t sound fatal.

But you have to consider the source of the current and the organs with which it will interact. According to Reader’s Digest. one amp can induce heart irregularities which can kill you. 5 amps can do even more damage to this sensitive organ which means that it is more than capable of killing you.

Voltage and current go hand in hand. Voltage is the potential for power rather than the power itself. You need to compare the voltage with the current and the resistance to successfully determine whether or not it poses any threat to your life.