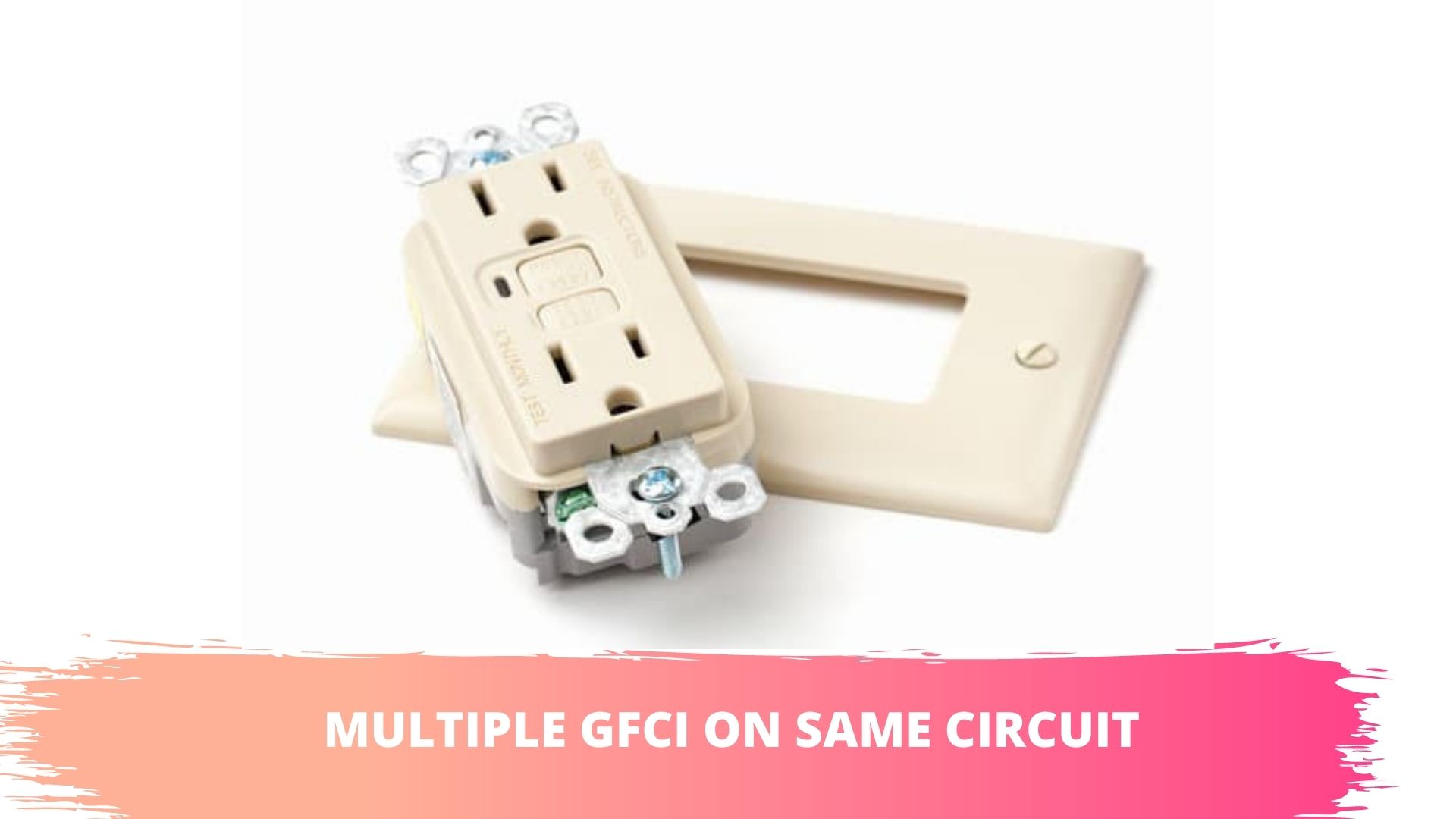 GFCI Outlets are all the rage these days. They are a legal requirement in many states. People rely on them to prevent electrocutions and fires. While some homeowners use professionals to install them, others prefer to replace their existing outlets with GFCIs themselves. Can you put 2 GFCI outlets on the same circuit?

There are no dangers associated with the installation of two or more GFCI outlets on a circuit. The only way things would go wrong is if you wired the circuit poorly. Check your local regulations. Some regions have strict guidelines governing the use of GFCI technology.

Therefore, it is ok that you can add multiple GFCI outlets to the same circuit.

What Does GFCI Do?

Those letters stand for ‘Ground Fault Circuit Interrupter‘. To understand what a GFCI does, you have to familiarize yourself with the following:

An electrical current flows through conductors in a circuit. The current has to remain within the confines of these conductors (the wires) as it runs back and forth from its source to a particular destination, such as a light fixture.

An electrical current doesn’t always flow along the desired path. It can sometimes stray from the insulated wires within which it is supposed to flow. This can happen when it encounters another conductor such as water.

Home Inspection Geeks compares this phenomenon to water leaking from a pipe. Though, in the case of electricity, a ground fault can produce disastrous results if the alternative conductor the current has discovered is a human being. This can lead to serious injuries, possibly even death.

Water is no better. If the current in a circuit decides to flow through a nearby water source, a fire could start.

A GFCI outlet monitors the flow of electricity. It knows the amount of current that should flow in and out of an outlet. The incoming and outgoing current should be balanced. When the current flows through an unintended target, it causes an imbalance.

Once the GFCI outlet detects this imbalance, it switches the electrical flow to the outlet off. An outlet with GFCI technology can still electrocute you. However, it will only do so for a brief moment, and it won’t do any lasting harm.

GFCI technology is supposed to shut the flow of electricity off within 1/10th of a second or even less. That doesn’t give the current enough time to kill you.

How are you going to install your GFCI outlet? Most outlets in most homes are wired in parallel or in the same line. This allows each outlet to receive electricity independently.

Wiring outlets in series isn’t a good idea. But that is only in situations where ordinary receptacles are concerned. With GFCI, you have two options to choose from:

1). You can install GFCI receptacles on every outlet.

Some people are willing to carry the cost associated with this option. They like the convenience that comes with knowing that each GFCI receptacle is only concerned with the electrical flow in a single outlet. But others cannot afford this configuration.

2). Most people prefer to install GFCI receptacles in series.

All the outlets downstream are offered the same GFCI protection as the outlet upon which the receptacle has been installed. As you can see, this option is cheaper because it allows you to protect multiple outlets using a single GFCI receptacle.

How Does a GFCI Outlet Work?

These outlets are easy enough to identify because they have two buttons, labeled ‘Test’ and ‘Reset’. When the outlet’s circuit breaker is tripped, the ‘Reset’ button will pop forward, indicating that the electrical flow to the outlet has been disabled.

You can store power by simply pressing the ‘Reset’ button. As you may have guessed, the ‘Test’ button tests the GFCI outlet to ensure that it is working. When you press it, the ‘Test’ button interrupts the electrical flow to the outlet, causing the ‘Reset’ button to pop forward. If this doesn’t happen, you can conclude that your GFCI outlet’s defensive mechanisms are not working.

Where Are You Supposed to Install GFCI Outlets?

The authorities expect property owners to add GFCI technology to outlets situated in places that are exposed to water. This is why I encourage you to add GFCI outlets to kitchens and bathrooms. The same goes for pool houses.

A GFCI outlet could save your life the next time you drop an active hairdryer into a tub of water.

In such a situation, the GFCI technology will realize that the current is flowing through the water. That will compel it to shut the power in the outlet off, preventing a disaster. Because these devices are lifesavers, they have been added to the building code in many regions.

As was noted above, while you can always use a professional, many property owners prefer to install their own GFCI outlets. If you have some electrical experience, the process isn’t all that difficult. It tends to involve the following:

1). For safety purposes, you should switch the power off.

According to the people at Home Depot,

You should leave a note on the electrical panel, warning everyone to keep the power off. If they turn it back on at the wrong time, they could cause a fatal injury.

2). Identify the outlet you want to replace.

Use a screwdriver to unscrew it. You have to remove the plate before unscrewing the outlet. Removing the outlet will expose two wires (or more) that shouldn’t be allowed to touch.

3). Get the GFCI outlet and find the ‘load’ and ‘line’ terminals.

The power wire, which should be black, goes to the line set. The white wire goes to the load set. Make sure your connections are secure before connecting the ground wire and pushing the GFCI Outlet into its proper position in the wall.

Naturally, the configuration of the wires will depend on whether or not you have chosen to install the GFCI outlet in series.

2 GFCI in Parallel VS Series – Benefits

Does it make more sense to install your GFCI outlets in series or parallel? Well, each option has its benefits:

As was mentioned before, it is cheaper to use one GFCI receptacle to protect multiple outlets. If you have dozens of outlets in a large building, it would cost you a lot of money to install a GFCI receptacle at each outlet.

Even though the installation of GFCI receptacles in series is cheaper, the configuration is also inconvenient.

If the power is cut at one outlet, you may lose power in all the outlets connected to the GFCI receptacle.

Yes, you can restore power by simply pressing the ‘Reset’ button. But if you have several outlets and they are not all in the same room, it might take you a while to find the outlet that tripped.

On the other hand, if you have a GFCI receptacle at each outlet, a problem at one outlet won’t affect the other outlets.

You could always install a GFCI breaker at the distribution panel. This would protect the whole circuit from ground faults.

Why Use GFCI Outlets?

The devices have several benefits, including:

They prevent deadly shocks. They have sensors that watch the flow of electricity in and out of an outlet. Whenever the current flows through an unexpected conductor, such as a human being, the GFCI kicks in and cuts the power to the outlet, preventing fatal shocks.

A current that has escaped a circuit may cause a fire. This can happen in a kitchen where water is allowed to trickle into an outlet or in the bathroom where an appliance has come into contact with a water source.

GFCI technology will detect the resulting anomalous flow of electricity, tripping the circuit to prevent fires from occurring.

GFCI outlets will protect your appliances. Leaking current can shorten the lifespan of your equipment if you don’t have GFCIs in place to respond to the leak by cutting the flow of current.

GFCI outlets prevent electrocutions and fires by cutting the power to an outlet whenever they detect an imbalance in the flow of current. This imbalance happens when the current flows through the wrong conductor, such as water or the human body.

The authorities expect property owners to install GFCI receptacles in places that expose outlets to water such as kitchens and bathrooms. You can install a GFCI receptacle at each outlet. This is costly but it is convenient because each GFCI receptacle only affects one outlet.