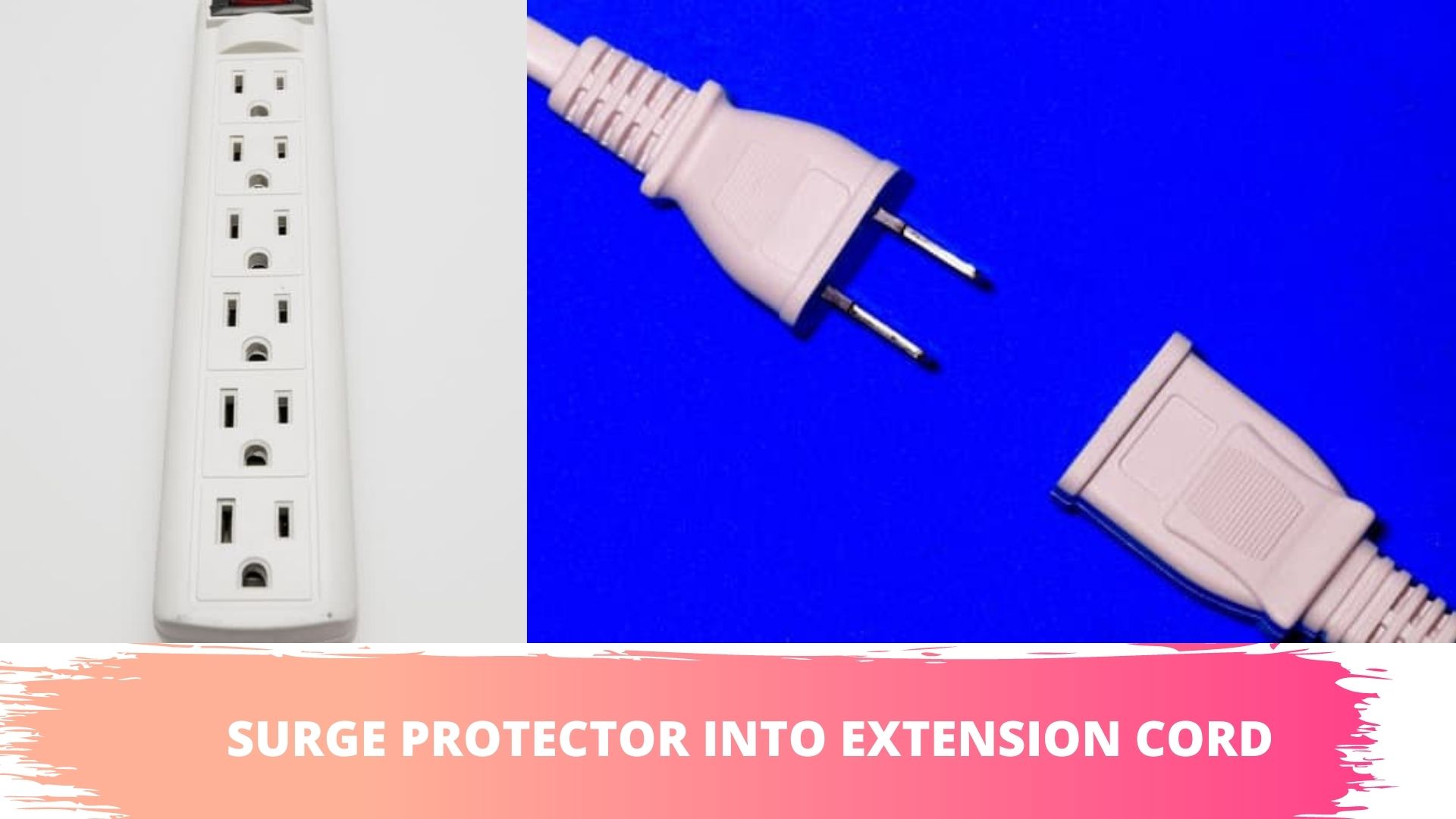 Surge protectors are supposed to protect you and your equipment from electrical surges which can occur as a result of lightning strikes, faulty wiring, and the like. But what happens when you plug a surge protector into an extension cord?

Can You Plug Surge Protector Into Extension Cord?

Can you trust it to continue protecting your equipment or will this configuration interrupt its surge protection mechanisms? This is the question that haunts homeowners that are forced to daisy chain surge protectors and extension cords.

They cannot help but wonder whether the tactic is safe. Most of their concerns are caused by electricians and technicians who keep insisting that daisy-chaining is a fire hazard that is just as likely to destroy you and your property.

However, as you will soon understand if you keep reading, these risks and threats are only present when a consumer fails to take the necessary precautions.

Is It Safe To Plug a Surge protector Into an Extension Cord?

Before you celebrate because you don’t live in this town, the National Electric Code says the same thing. That being said, most people will tell you that this practice is only dangerous if the extension cord is too weak and inefficient to carry the load of the appliances attached to the surge protector.

People complain about the dangers of daisy-chaining because they keep buying crappy extension cords and surge protectors that would have started fires even if they hadn’t been daisy-chained.

People daisy chain these devices because, sometimes, a surge protector’s cord isn’t long enough to reach the gadgets they want to use. An extension cord solves this problem. Extension cords are not like ordinary power strips. They have a much longer cable. As their name suggests, you can use them to extend the reach of a surge protector.

If you have to use a power strip, you should prioritize surge protectors. While extension cords extend an outlet’s reach, surge protectors increase the number of outlets whilst also offering surge protection at each of those outlets.

How To Plug A Surge Protector Into Into Extension Cord?

The only way to safely plug a surge protector into an extension cord is to take the following precautions:

1). Rating of an Extension Cord Must Match the Rating of a Surge Protector

The extension cord’s ampacity should be equal to or greater than the ampacity of the surge protector.

Do not use the surge protector to operate power-hungry appliances like space heaters.

You are more likely to overload the surge protector and extension cord. It is worth noting that daisy-chaining increases the distance the current has to travel which, in turn, increases the resistance.

The greater the resistance, the greater the heat generated, the higher the chances of a fire starting. This is why it is safer to stick with weaker gadgets that do not require a lot of power such as computers and phones.

3). Keep it Away from Areas with a Lot of Foot Traffic

CNET wants you to keep surge protectors and extension cords in the open. Do not hide them under rugs. They will overheat. You should also keep them away from areas with a lot of foot traffic. Otherwise, they will wear out. Worn-out cords are more likely to start fires.

You should only use power strips that organizations like Underwriters Laboratories have vetted. A decent gauge and ampacity are irrelevant if the power strip in question doesn’t have a safety rating. The presence of a safety rating tells you that the device was tested and that it met all the relevant safety standards.

Many unrated surge protectors and extension cords are cheap despite their strong gauge and ampacity because they are poorly constructed, which is why they tend to start fires.

This is supposed to be a temporary solution. You should never daisy chain surge protectors and extension cords permanently. You can use the tactic in emergency situations for a few hours or days.

The fire code in many places allows you to rely on power strips for up to 90 days. But you shouldn’t daisy chain for that long. The more time you spend using extension cords, the more wear and tear they suffer, the greater the chance of something going wrong.

Will A Surge Protector Work Plugged Into An Extension Cord?

Should I Plug An Extension Cord Into A Surge Protector?

No, you should plug an extension cords into wall outlets. However, in truth, this tactic is no different from plugging a surge protector into an extension cord. In fact, in some ways, it is better.

Of course, you have to pay close attention to the gauge and ampacity. If the extension cord has a high gauge and ampacity, the kind that can accommodate powerful appliances, the power-hungry appliances attached to its outlets may overload the surge protector.

Stick with 14-gauge wire or greater. The greater the thickness, the more current the extension cords and surge protectors can carry, the lower the chances of an overload happening.

But even if you have the right ampacity and gauge, you are still expected to limit the appliances you attach to devices that do not utilize a lot of power.

The increase in resistance caused by the increase in the distance the current has to travel to reach the appliances on the extension cord means that gadgets that use a lot of electricity could cause overheating.

Is It Dangerous To Use An Extension Cord With A Surge Protector?

Another mistake some consumers make is to cover these devices with rugs and carpets. In an effort to use them permanently, others install them behind walls without realizing that such habits encourage overheating.

If your extension cords and surge protectors have the appropriate gauge, and if they are used temporarily and positioned in a well-ventilated location, they shouldn’t present any danger.

Regardless of the avenue you choose to follow, everyone agrees that daisy-chaining is safest when you have extension cords and surge protectors such as the following whose functionality, efficacy, and quality can be trusted:

This power strip comes with six independently controlled outlets and enough USB ports to charge three different devices. It has ETL certification which shows that it can be trusted to protect your sensitive appliances from power surges.

It has a smart app that you can use to track the amount of power each device uses. You can use the same app to control the devices attached to the ports and outlets. If that wasn’t convenient enough, the power strip comes with a voice control function.

This tower has 12 outlets that guarantee surge protection of 1000 joules, which is more than enough to defend your electronic devices from surges. The 5 USB ports on offer have a function that identifies the connected device before making adjustments that ensure the fastest charging speeds.

The vertical shape of the power strip is convenient. It saves a lot of space. Not only is the item ETL and FCC Certified but it comes with a 30-day no-hassle return policy and a 2-year warranty.

This item comes with $150,000 insurance and a lifetime warranty. It has 12 outlets and enough room to cater to the needs of four transformer plugs of significant size. The cord is 8-feet long. It gives the surge protector the reach of an extension cord. You can expect protection of 2880 joules, diagnostic LEDs, 12A circuit breakers, and UL 1449 safety certifications.

This power strip is surprisingly cheap. However, it is still efficient. It offers 4,500-joule protection and eight outlets that are designed to defend the sensitive devices you attach from spikes and surges.

Expect LED lights that will reveal whether or not the surge protection is active, fireproof MOVs, and a strong 6-foot cord. The power strip comes with an On/Off switch.

Either way, neither practice is inherently more dangerous than the other. This kind of daisy-chaining only becomes a problem when you use surge protectors and extension cords with poor gauges and a low ampacity to operate powerful gadgets and appliances.

Such bad habits can lead to overloading and overheating which, in turn, can lead to fires and electrocutions. If you can use 14-gauge wire or greater and if you limit the appliances attached to weaker devices that do not draw a lot of electricity, you can daisy chain extension cords and surge protectors without causing any harm.