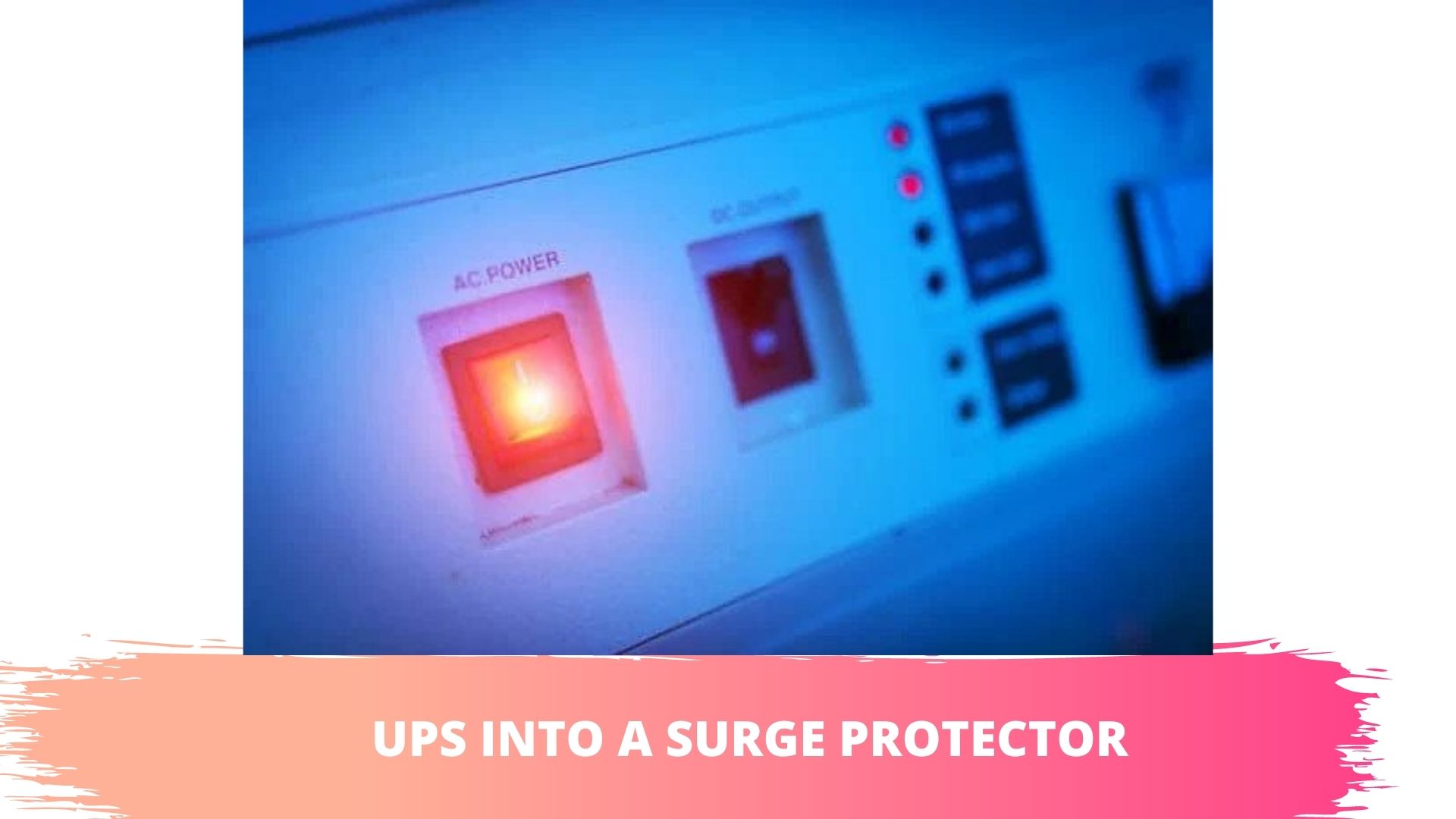 Can you plug a UPS into a surge protector? Yes, you can. However, the common fear is that the surge protector will compel the UPS to rely on its battery at all times, causing it to wear out at a faster rate.

This behavior is far more common than you think. UPS units are quite common in homes and offices these days. People use them as battery backups during blackouts.

But what happens when your home encounters a surge? Can a UPS protect you? If it can’t, should you place a surge protector between the UPS and the wall outlet? The answers to these questions are not quite as clear as you might expect.

There are so many varying opinions on the issue of plugging it. If you want a definitive answer, you might be disappointed. While many professionals will caution you against plugging against it because the average consumer will encourage you to approach this issue on a case-by-case basis.

What Does a UPS Do?

As you now know, a UPS provides backup power. However, it should be noted that a UPS isn’t a permanent solution to your power problems. You cannot use it to operate your devices for long periods.

The average UPS on the market is designed to provide ten, possibly even twenty minutes of power. As Kadansky has explained, you have to use that time to save your work before shutting your computer down.

What Devices are Suitable for a UPS?

According to Meridian Outpost,

The average UPS is primarily expected to protect devices with sensitive components such as desktops and laptops.

It wasn’t meant to power microwaves, fridges, coffee makers, and the like.

First of all, those items can survive dramatic power events such as sudden blackouts and brownouts. The same cannot be said for printers, computers, and servers. Secondly, heavy appliances like refrigerators are more than capable of overloading ordinary UPS units.

Is a UPS Also A Surge Protector?

They have batteries that will maintain the consistency of your computer’s power supply once the power coming from the grid drops below the appropriate threshold. They can do everything an average surge protector does.

Most of the modern UPS units on the market have some form of surge protection.

Not only can they defend against spikes in voltage but you can trust them to protect your sensitive appliances from harm during a brownout.

On the other hand, if the UPS is plugged into the wall outlet, a powerful surge could destroy it. Of the two, the surge protector is cheaper and easier to replace.

Can You Plug A UPS into a Surge Protector?

Yes, you can.  UPS Manufacturers will tell you otherwise. They do not want consumers to pair their products with power strips of any kind, and any attempt to do so will void the warranty of the UPS.

Is Plugging A UPS Into a Surge Protector Okay?

UPS Manufacturers will tell you that the practice is unacceptable. They have cited several reasons, including:

2). If you plug the UPS into the surge protector, the setup will force the UPS to use the power in its battery even though a blackout hasn’t occurred.

Some consumers have disputed these claims. In many cases, people use power strips and surge protectors because their UPS doesn’t have enough outlets. These consumers suspect that UPS manufacturers make arguments such as the ones above as a way of tricking their customers into buying additional hardware that can solve the issue of inadequate UPS outlets.

The consumers argue that they connect UPS units to surge protectors all the time and they haven’t encountered any challenges.

However, other consumers have argued the opposite. First of all, they agree that a surge protector might force a UPS to rely on its battery power at all times, an occurrence that will wear the battery out at a faster rate. ExcessUPS agrees with this assessment.

These dangers are more potent with surge protectors, which is why you are better off using an ordinary power strip that doesn’t have any surge protection.

What does this tell you? should ups be plugged into a surge protector? While many consumers do so every day without suffering any significant consequences, you are better off listening to the professionals.

They believe that a UPS shouldn’t be paired with a surge protector. Unless you have some experience with electricity and electrical devices, you shouldn’t take any chances. Even if you experiment and ultimately determine that the act of plugging a UPS into a surge protector is perfectly safe, don’t forget that doing so will void your warranty. Why risk it?

Is Plugging A Surge Protector Into a UPS Okay?

Any power strip with surge protection is going to complicate matters. You are better off using an ordinary power strip. But you should pay close attention to the items you attach to the power strip. Heavy appliances will overload the UPS.

Can I Plug A UPS Into A Extention Cord?

It is risky. However, you can mitigate those risks by using a powerful extension cord that can handle the load exerted by the UPS. A 10 or 12-gauge cord should do.

Some people think that 10-gauge is too powerful. But you are always better off having a more powerful cord than you need.

Don’t forget to account for the length. A long cord translates into more resistance.

Get the shortest cord possible.

Placement is also important. Carpets and rugs shouldn’t cover your extension cord. That applies to furniture as well. Not only will it increase wear and tear but such concealment is more likely to start a fire.

If that doesn’t concern you, some UPS manufacturers will void your warranty if you use an extension cord and things go wrong. This is why professionals in the field discourage people from pairing extension cords and UPS units. They believe that a UPS should be plugged directly into a wall outlet for the best results.

Can You Plug a UPS into a UPS?

Yes, you can do it, but it isn’t a good idea. It doesn’t provide any redundancy. If the UPS connected to your device fails, the UPS units below it might continue to operate but they won’t give your device any power.

Secondly, you cannot access the total backup power of multiple UPS units by connecting them. Your device will only use the UPS closest to the load. Additionally, Eaton believes that inverter compatibility issues will prevent daisy-chained UPS units from functioning properly. There is no advantage in daisy-chaining UPSs. The strategy is a waste of time and resources.

Can a UPS be plugged into a surge protector? Yes, you can. However, the common fear is that the surge protector will compel the UPS to rely on its battery at all times, causing it to wear out at a faster rate.