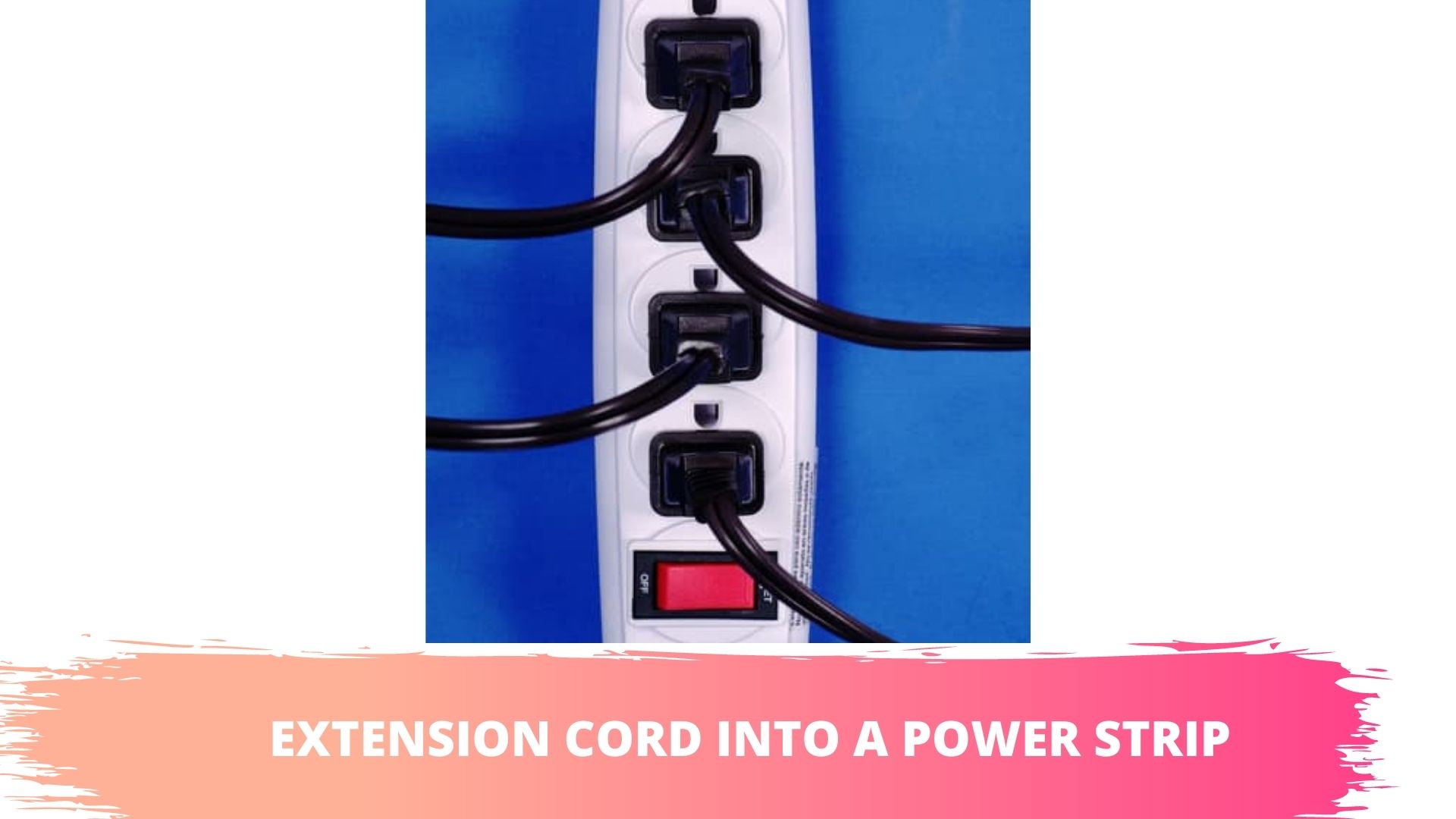 Should you plug an extension cord into a power strip?

The layperson will say ‘Yes’ because they do this all the time. But the expert will say ‘No’ because the practice is illegal. It is also a fire hazard.

It is just as dangerous to plug a power strip into another power strip. But if people do this all the time and they do not necessarily suffer the consequences, one cannot help but wonder whether the experts have it wrong.

Why are they so determined to prevent consumers from plugging extension cords into power strips? To appreciate their stance, you have to keep reading. This is the only way for you to understand the dangers associated with this practice.

Can You Plug An Extension Cord Into A Power Strip?

That is the issue that many experts are so determined to raise.

Is It Safe To Connect The Extension Cord To The Power Strip?

Connecting an empty extension cord to an empty power strip is perfectly harmless. Extension cords and power strips cannot draw power unless you plug appliances into their outlets.

This is where the danger lies. Entities like CNET have discouraged people from daisy-chaining power strips and extension cords because the practice becomes quite risky once you attach gadgets and appliances.

The dangers that experts associate with daisy-chaining stems from three specific issues, namely:

People use power strips to multiply the number of outlets at their disposal. Power strips are dangerous because their design encourages people to overwhelm them. Because they have so many outlets, people are tempted to plug appliances into every single outlet.

Even if the wattage of the individual appliances is low, the total load of multiple appliances can easily overload a power strip. This concern is doubled when you daisy chain extension cords and power strips.

If that wasn’t bad enough, if you attach power-hungry devices to daisy-chained extension cords and power strips,  the practice can overload the circuit, tripping the breaker in the process.

Do not think that you can rely on the breaker to save you every single time. The breaker can malfunction.

By plugging an extension cord into a power strip, you are basically increasing the length that the current has to travel which, in turn, elevates the resistance.

An increase in resistance raises the voltage drop, not to mention the potential for overheating.

If things go wrong and a fire starts because you daisy-chained extension cords and power strips, you can be sued for the lives that were lost and property that was destroyed. You could incur significant financial penalties. You could also go to prison.

Is It A Fire Hazard?

Yes, this practice is a fire hazard. All extension cords and power strips have a rating that you shouldn’t exceed. A powerful appliance can force a power strip to transmit more electricity than it was designed to carry causing fire.

This can cause the wires in the power strip to overheat. If you have connected an extension cord to a power strip, the increase in resistance will generate even more heat. If some of the components in the extension cords and power strips melt, they may start a fire.

Plugging An Extension Cord With A Power Strip – How?

For the best results, you should select the right gauge, preferably 12 gauge and above. This way, you are less likely to overload these devices. 12-gauge power strips and extension cords can carry a lot of power.

If you want to select the best extension cord to plug into a power strip, you have to take these factors into account:

This was already mentioned but it should be repeated because it is so important.

Get an extension cord with a gauge of 12 or greater.

A strong gauge allows the wires in the extension cord to withstand large volumes of current. The gauge can also compensate for the length and the resulting resistance.

Prioritize extension cords whose plugs have three prongs. The additional prong is concerned with the grounding and it makes the extension cord more secure.

Can You Use a Power Strip With an Extension Cord?

If you can maintain the gauge and amperage rating of the power strips, you can use it! However, if the load exceeds the capacity of power strips, it can cause a fire. On top of that, you can also be sued for the lives that were lost and property that was destroyed.

Experts hate this practice but people do it all the time. It is a fire hazard. But if you take a power strip and extension cord with right guage, it is fine!