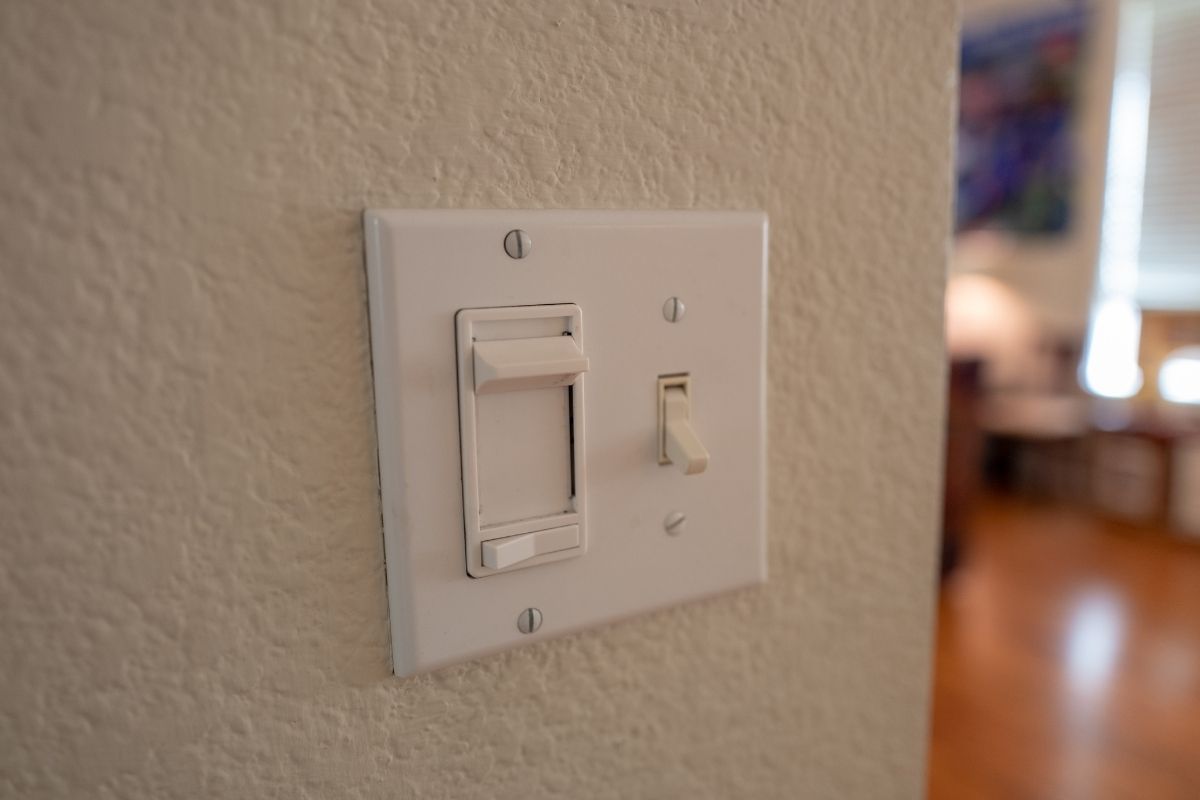 People use dimmers to save energy. With a dimmer, you can improve the ambiance while reducing the amount of energy the bulb is using. 3-way switches, on the other hand, enhance convenience because you can switch the same light ON and oFF from two different locations. But can you combine the two?

Can You Put A Dimmer On A 2 Way Switch?

You can place a dimmer on a 2-way switch. But you should avoid ordinary rotary dimmers. Instead, you need to buy a push-on/off dimmer. You should also place one dimmer on a 2-way circuit. You have to pair the dimmer with a regular switch. Don’t install two different dimmers for a single light on the same circuit.

The idea of a dimmer on a 2-way switch is to dim the lights from two different locations.

If you have a light fixture that you can control from more than one location, you can only have one dimmer on that circuit.

You have to emphasize the importance of avoiding conventional rotary dimmer switches because you are more likely to create instabilities in the circuit.

You don’t want this kind of confusion on your circuit.

The answer is to place a dimmer switch and an on/off switch on the circuit. The dimmer will control the brightness of the light as expected.

With the two-way switch, you can switch the light ON or OFF at the level where the dimmer left it. In other words, if you dimmed the light to 50 percent, the switch will activate the light at 50 percent.

How Do You Install A Dimmer On 2-Way Circuit?

To wire a 1-way switch, you have to identify two terminals: a COM terminal and an L1 terminal. These terminals are marked. The live wire runs to the COM terminal, whereas the L1 terminal acts as the light fixture’s output.

If you have a decorative light switch, you may notice a third terminal labeled ‘L2’. But for 1-way switches, you can ignore the L2 terminal. It only comes into play when you wire two-way switches.

You cannot use dimmers in two different locations to control the same light. But you can achieve a similar result with a master and slave switch.

You can use one master control and multiple slave switches scattered throughout the house. However, because these devices use digital mechanisms, they are more expensive than conventional dimmers. Keep this in mind. If you don’t mind the expense, this is what you can expect:

1). Switch the main breaker off before you start your work. This prevents electrocution.

2). Identify the switch you want to replace and remove the faceplate.

3). Remove the screws binding the switch to the wall box and pull it out, exposing the wires. Before you proceed, make sure the switch is safe by touching the wires with a voltage tester. This will show you whether or not the power is off.

You can’t use an ordinary dimmer in situations like this. You need unique brands like the Lightwave Smart Switch or Varilight V-Pro Multi-point Dimmer.

These switches have diagrams showing you how to wire them. Anyone can follow these instructions to wire the dimmer correctly. Once you secure the wires with a nut, you can push the switch back into the box before inserting the screws.

5). If you trust the work you’ve done, you can install the slave switches at the relevant points in the house. Because these switches come with wiring diagrams, you will find that wiring them isn’t particularly difficult.

Can You Put 2 Dimmers On A 3-Way Switch?

You cannot exceed a single dimmer on a circuit. One switch can be the dimmer, while the other is an ordinary ON/OFF switch.

A three-way switch allows consumers to control the same light from two different locations. For instance, you can switch the lights above a stairway on or off before you descend or ascend. Many three-way switches do not have ON/OFF markings because they are unnecessary.

As their name suggests, they have three screw terminals, not counting the grounding screw

A three-way switch allows you to control a light from two locations. Adding a switch to a 3-way circuit produces a 4-way switch which, in turn, increases the number of places from where you can control the load.

How-To-Wire has a diagram that shows you how to insert the 4-way switch between the two 3-way switches. If you want to add a dimmer, this stack exchange discussion has additional diagrams that reveal the best way to add a 3-way dimmer.

The dimmer should replace the 3-way switch at the line end.  Wire your circuit according to the instructions in these diagrams.

Can You Put A Dimmer On A 3 Way Switch?

You can add a dimmer to a 3-way switch. But you have to replace one of the 3-way switches on the circuit.

To switch a light on and off from two different locations, you need two 3-way switches.

A single 3-way switch at one location is not enough. If you replace one 3-way switch with an ordinary dimmer, you will compromise the other 3-way switch’s ability to toggle from one line to another.

Simply put, you won’t have the option of controlling the same light from two different locations. You must replace one of the 3-way switches with a 3-way dimmer.

Place it on the common line that leads to the 3-way switches. With this configuration, one switch will turn the light on and off while the other manipulates the intensity of the light.

How Do You Install A Dimmer On 3-Way Circuit?

1). Get the 3-way switch and identify the ground, hot, and traveler wires. In most cases, these wires are marked.

2). Connect the ground wires of the switch and the dimmer. This is the green or copper wire. Secure the wires with a plastic wire cap.

3). Connect the red and hot lead wires. Again, use a plastic wire cap to secure them.

4). Connect the black wires to the traveler wires coming out of the wall.

The people at House Beautiful have detailed several methods for installing both ordinary switches and dimmers. They will also show you how to remove an old switch before replacing it with a new 3-way switch or dimmer.

You can use a 3-way dimmer on a 4-way circuit but you should match the amperage and voltage of the dimmer to the switch you want to replace. Additionally, you have to ensure that the dimmer you wish to use is compatible with the electrical circuit and the light fixture.

How Do You Wire A 3-Way Dimmer In A 4-Way Circuit?

As was mentioned before, these dimmers come with diagrams and instructions. By following these instructions, you can install the dimmer. Don’t forget to turn the power off at the circuit breaker before you proceed.

If you don’t have confidence in your abilities, hire a professional. If you don’t wire the switches and dimmers correctly, they won’t work. You should leave this work in the hands of an expert.

Can You Put A Dimmer On 4 Way Switch?

You can put a dimmer on a 4-Way Switch. But you need one 3-Way Dimmer. Don’t use basic dimmers. Use brands like Lutron Maestro that are designed to work with 3-Way and 4-Way switches. You can use these specialized dimmers to control the intensity of the light from multiple locations.

Pay close attention to the instructions. It is common practice for these brands to provide a guide explaining the best way to install their dimmers.

How Do You Install A Dimmer On 4-Way Circuit?

With a 3-Way setup, you have two switches controlling the same light. With a 4-way configuration, you add a third switch between the two switches. If you want to add a dimmer, you must replace one of the 3-Way switches in the circuit.

You don’t want to install multiple dimmers unless you have a unique brand that allows consumers to control the same light from different locations. With the average dimmer, you can only add one. This means locating one 3-Way ON/OFF switch you are willing o replace.

You can either replace the first or the last switch in the configuration.

If you want the dimmer to become the primary means of controlling the light, you can close the other two switches off. This means opening the individual 3-Way Switches and merging the load wire with one of the travelers. You can also cover the other traveler with a cap.

This will ensure that the switches are stuck in the ON position. After this, you should merge the top wires of the 4-way switch. Do the same thing to the bottom wires.

Connect each section with the black wire from the dimmer switch. Don’t forget to switch the breakers off before you start.

Eric Welander provides a more detailed breakdown of this process.

Though the method he details concerns the Lutron Caseta Wireless Dimmer. If you have a different brand, check the manual to determine whether or not the wiring instructions are different from what you expect. Most brands use similar wiring configurations and methods.

Can You Put A Dimmer Switch On Any Switch?

You can install a dimmer on any switch. Once in place, the dimmer switch will control the brightness of the light, allowing the user to conserve power, reducing their energy bill in the long run.

Rather than obsessing over the switch, you should pay more attention to the light bulb the dimmer is supposed to control. Most fluorescent fixtures and low-voltage lighting options cannot work with dimmers. There is little point in pairing a dimmer with a light that is not compatible with dimmers.