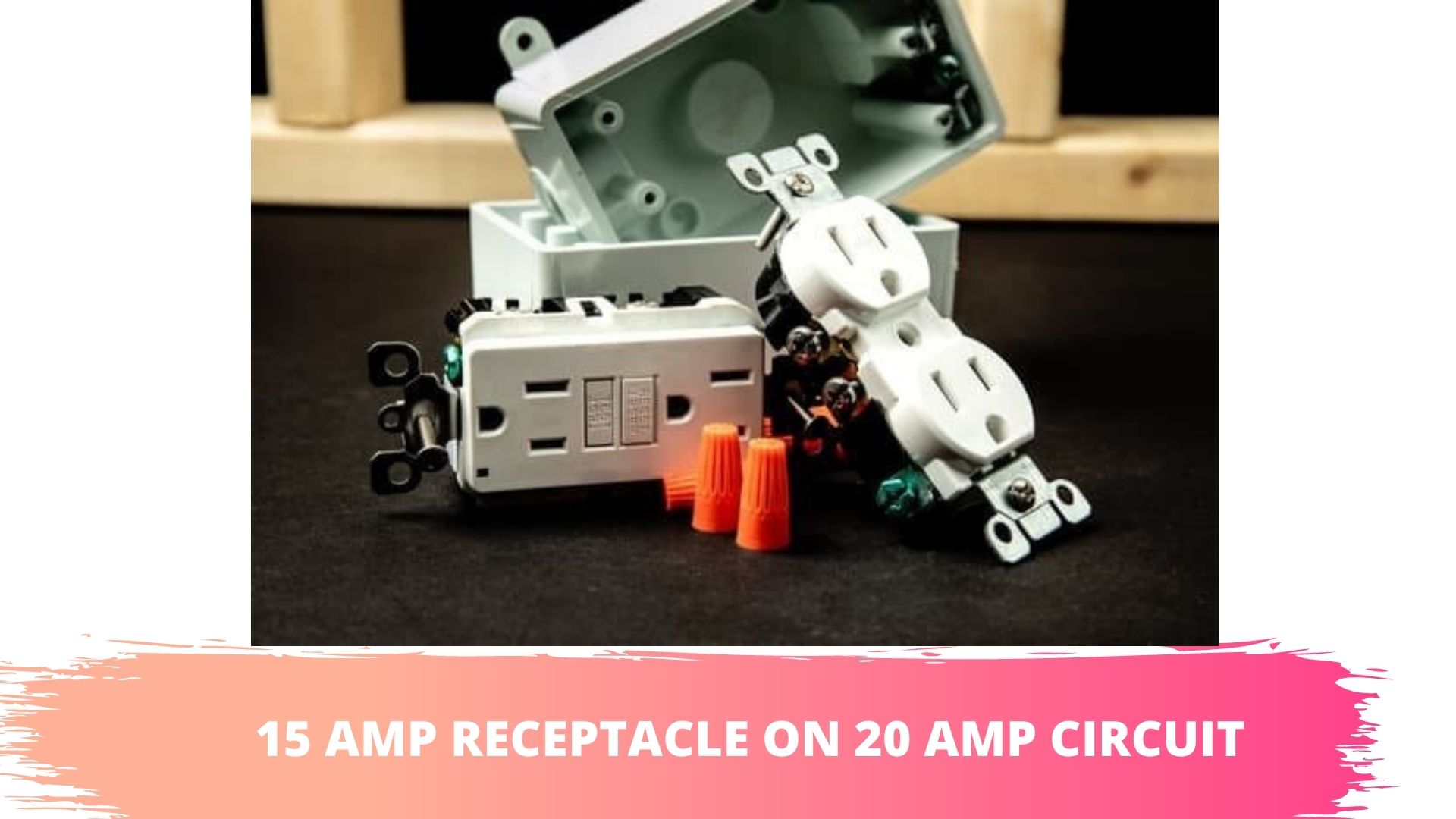 It doesn’t take much to overload a circuit. Can you use a 15 Amp receptacle on the 20 Amp Circuit?

The NEC permits this practice. They are designed to work with 15 amp receptacles. You can overload a 15 amp receptacle if you use it to power an appliance that draws 20 amps or more. But a 20 amp plug cannot fit in a 15 amp outlet, to begin with.

If you force a circuit to carry more current than its rating permits, the excess heat generated will melt the wires, starting a fire.

Of course, most people trust their circuit breakers to intervene in such situations, tripping to prevent the continued flow of power before it can cause harm. But breakers do not always respond as required.

You are better off taking measures to stop your circuit from overloading in the first place. One such measure is to pair your circuit with a receptacle of the appropriate rating.

Common sense suggests that an electrician should only use 20 Amp receptacles on their 20 Amp circuits.

But 20 Amp receptacles are more expensive than 15 Amp receptacles, which is why so many people are tempted to use 15 amp outlets on their 20 Amp circuit. But is the practice acceptable? More to the point, is it safe? Those are the questions this guide intends to answer.

Yes, it is perfectly okay. The topic is controversial. Some experts have argued that the practice is dangerous. However, very few people support their arguments. You have to keep two factors in mind:

And according to North Central Washington Home Inspections, the NEC permits electricians to add 15 amp outlets to 20 amp circuits if they are duplex receptacles.

So a single receptacle on a 20Amp circuit should be 20 amps as well. But if you have multiple receptacles on the 20 Amp circuit, they can be 15 Amps or 20 Amps. As far as the NEC is concerned, a duplex receptacle counts as two outlets.

If you’re only concerned with the opinion of the NEC, it is quite clear on this issue. It has a table which shows that 15 and 20 Amp outlets can be added to a 20 Amp circuit.

What Happens When You Put A 15 Amp Receptacle on 20 Amp Circuit?

Nothing will happen. Some people think that you ran the risk of overloading the outlet, causing it to overheat before starting a fire. You cannot completely ignore this concern. An appliance that should only draw 15 Amps can suffer a malfunction, causing it to pull more current than is safe. However, such occurrences are rare.

Electricians that are trying to explain why this configuration is acceptable normally highlight two important factors:

People worry that a consumer will plug an appliance rated for a 20Amp outlet into the 15Amp outlet, causing it to overload. But this concern doesn’t have much merit. This is because 15Amp plugs and 20Amp plugs are not the same.

20Amp plugs are typically assigned to devices like air compressors and saws that require a lot of power. For the most part, you don’t have to worry about overloading your 15 Amp outlet by plugging a 20 Amp device into it.

Hunker has highlighted the fact that 15 and 20 Amp receptacles are not all that different on the inside. The configuration of their slots varies.

But you have to consider the fact that 15 Amp circuits have wires that can carry 20 Amps. As such, you can probably understand why the NEC allows technicians to use 15 and 20 Amp receptacles on a 20 Amp circuit.

How Many 15 Amp Receptacles Can Be On A 20 Amp Circuit?

You can add as many outlets as you want. The NEC doesn’t provide any guidance on this issue. However, you shouldn’t overload the circuit. Do not attach appliances whose total draw exceeds the rating of the circuit.

Even though the circuit has a rating of 20 Amps, the NEC doesn’t want the load it is carrying to exceed 80 percent of its rating, which means that you only have 16 amps to play with on a 20 amp circuit.

Figure out the number of appliances you want to connect to the 20 Amp circuit. Their total load will determine the number of receptacles you choose to add.

Yes, you can. There are no physical complications preventing you from installing a 20 amp outlet on a 15 amp circuit. You might argue that a 20 amp outlet will cause an overload. But receptacles don’t draw power.

Unless you plug an appliance into its slots, a 20 Amp receptacle on a 15 amp circuit is completely harmless. It cannot do anything to threaten your health or your property.

No, it isn’t. The National Electric Code has strict guidelines governing the use of outlets. While it allows electricians to add 15 and 20 Amp outlets to 20 Amp circuits, it prohibits them from adding receptacles that exceed 15 amps to 15 Amp circuits.

In other words, your 15 amp circuit requires a 15 amp receptacle. If you have a 20 amp outlet on a 15 amp circuit, you are breaking the law, unless your local electric code says otherwise.

What Happens When You Put A 20 Amp Outlet On A 15 Amp Circuit?

Again, nothing will happen. On their own, outlets do not draw power. I warn against this practice because a 20 Amp outlet allows the appliances attached to it to draw up to 20 amps, which exceeds the rating of a 15 amp circuit.

In other words, you can safely use a 20 Amp outlet on a 15 Amp circuit if the appliances attached do not exceed the rating of the 15 amp circuit. If you force the circuit to draw more power than it can handle, the breaker will trip. That is the best-case scenario. In the worst case, the wires will overheat, starting a fire.

How Many 20 Amp Receptacles Can Be On A 15 Amp Circuit?

You can add as many outlets as you want. The key is to ensure that the appliances you attach do not exceed the rating of the circuit. If you have a power-hungry appliance, you are better off dedicating the entire circuit to it, which means adding one outlet.

Can you use a 15 Amp receptacle on a 20 Amp circuit? Yes, you can. The NEC permits this practice. More to the point, most households in the US use 15 amp outlets on 20 amp circuits.

15 amp and 20 amp outlets have different configurations on the outside. You are more likely to overload the circuit if you have installed multiple 15 Amp outlets that are supplying power to various appliances whose total load exceeds the rating of the 20 amp circuit.

But that is unlikely to happen if your outlets have been installed by a professional electrician. They can calculate the load your appliances will exert to determine the right number of outlets to add to a particular 20 amp circuit.

Can you put a 20 amp outlet on a 15 amp circuit? Yes, you can. On its own, the 20 amp outlet won’t draw any power. This configuration only becomes dangerous when you attach an appliance that uses 20 amps.