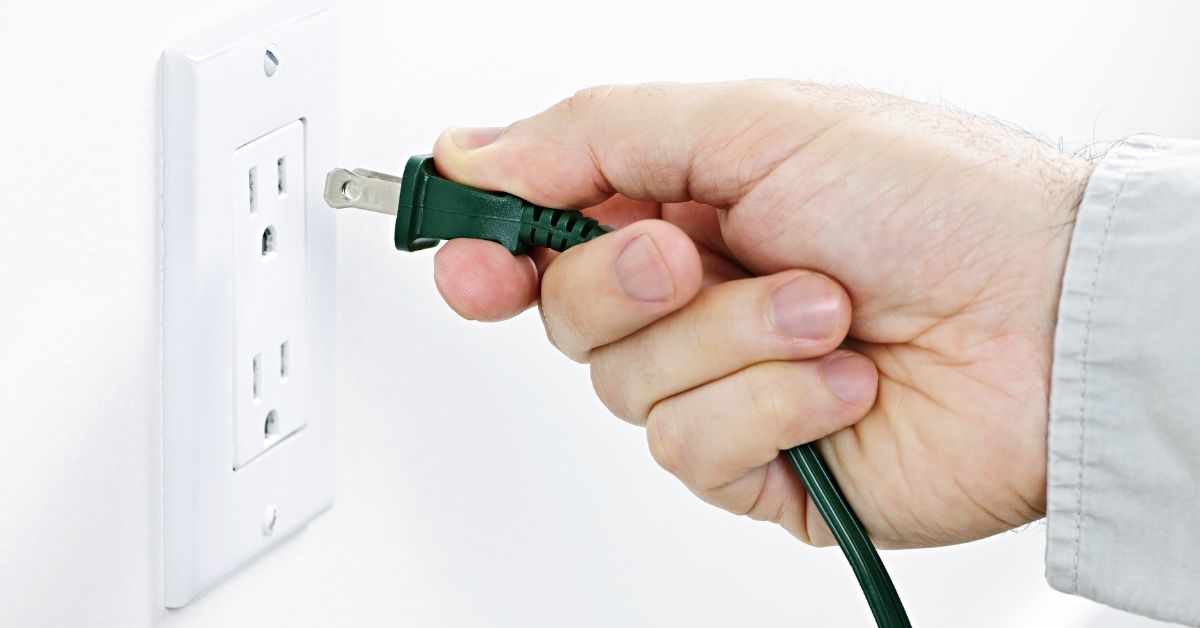 To use most appliances, you have to connect their plugs to a power source such as a wall outlet, extension cord, or power strip. But what happens when the plug refuses to enter the outlet? People don’t understand why this happens or how to solve it. They think that they have to replace the entire outlet but that isn’t always the case.

Why Can’t I Plug Anything Into My Outlet?

Several factors can prevent a plug from entering an outlet, including:

Some sockets have shutters that are designed to prevent children from accidentally sticking metal objects into the outlet. Sometimes, the shutters become damaged. This prevents them from moving out of the way whenever you attempt to push the prongs of a plug into the slots of the outlet.

Some plugs have two prongs. Others have three prongs. Outlets are the same. Some have two slots, others three. You can push a 2-prong plug into an outlet with three slots.

3). Blockage Due To Debris

If you can’t plug into an outlet, you have to consider the possibility that the slots of the outlet have some form of debris that has denied the prongs of the plug entry. Children have a tendency to push stones, pieces of paper, and other objects into the slots of outlets.

If the prongs of the plug are thicker than the slots of the outlet, the plug won’t enter the outlet.

How To Insert Plug Into Socket? – Quick Ways To Fix It

Normally, you use a plug by simply pushing it into the socket. But if the plug won’t enter the socket, you must first find out why before you identify a suitable solution:

1). You can’t do anything to solve configuration issues. If the plug has thick prongs or if it has three prongs but the outlet has two slots, your best option is to find another outlet whose configuration matches the plug. Though, you can also use an adapter if you have one on hand.

An adapter will permit a plug with three prongs to enter an outlet with two slots. But in some cases, this method eliminates the grounding protection.

2). If the outlet is blocked by debris, switch the power off and use a screwdriver to pull the debris out. In some cases, you may be forced to disassemble the outlet to get to the debris.

3). If the outlet has damaged shutters, you can use a screwdriver to manually open them. Though, in some cases, all you have to do is to wiggle the plug to make it enter the socket.

The shutters are supposed to make it more difficult for the plug to enter the socket.

This doesn’t make them defective. If you have decided to manually open them with a screwdriver, make sure you switch the power off.

If you don’t understand why the plug won’t enter the outlet, hire an electrician. If you have the skills, you should also consider replacing the outlet, especially if the plug keeps falling out because the contact points are damaged.

Plug Only Goes Halfway Into An Outlet – Why?

How Dangerous Can It Be If A Plug Isn’t Pushed Completely In?

If you can’t plug into an outlet, you are better than someone whose plug only enters halfway. This is because a plug whose prongs have failed to completely enter the outlet leaves the hot blade exposed. People that touch that hot blade could receive a terrible shock.

If the plug is attached to an appliance that uses a lot of power, the arc created by the space between the contacts may generate enough heat to start a fire.

Why Is It Hard To Plug Into A GFCI Outlet?

Because tamper-resistant GFCI outlets have shutters that restrict access, pushing a plug into a GFCI outlet may present a challenge for some people.

The NEC expects GFCI outlets to be tamper-resistant. According to Home Electrical, the NEC also expects every contractor to use tamper-resistant outlets during construction and renovation projects.

How to Ease It?

A lot of outlets are stiff when they are new. If you give them time, they will become loose. The more you use them, the looser the shutters become. Additionally, unless your GFCI outlet is defective, so long as you apply enough pressure, the plug will enter.

Can’t Plug Into A Surge Protector – Why?

The outlets on surge protectors have the same problem as ordinary wall outlets.

I Can’t Plug Into My Tamper-Resistant Outlet- Why?

Tamper-resistant outlets have shutters that are supposed to prevent children from pushing objects into the slots of the outlets. They are supposed to make it somewhat difficult for the plug to enter.

You require more pressure to push a plug into a tamper-resistant outlet than an ordinary outlet. If the plug can’t enter the outlet despite the pressure, the shutters are most likely damaged.

How Do You Plug Into A Tamper-Resistant Outlet?

If you can’t plug into an outlet, you probably don’t understand how tamper-resistant outlets work.