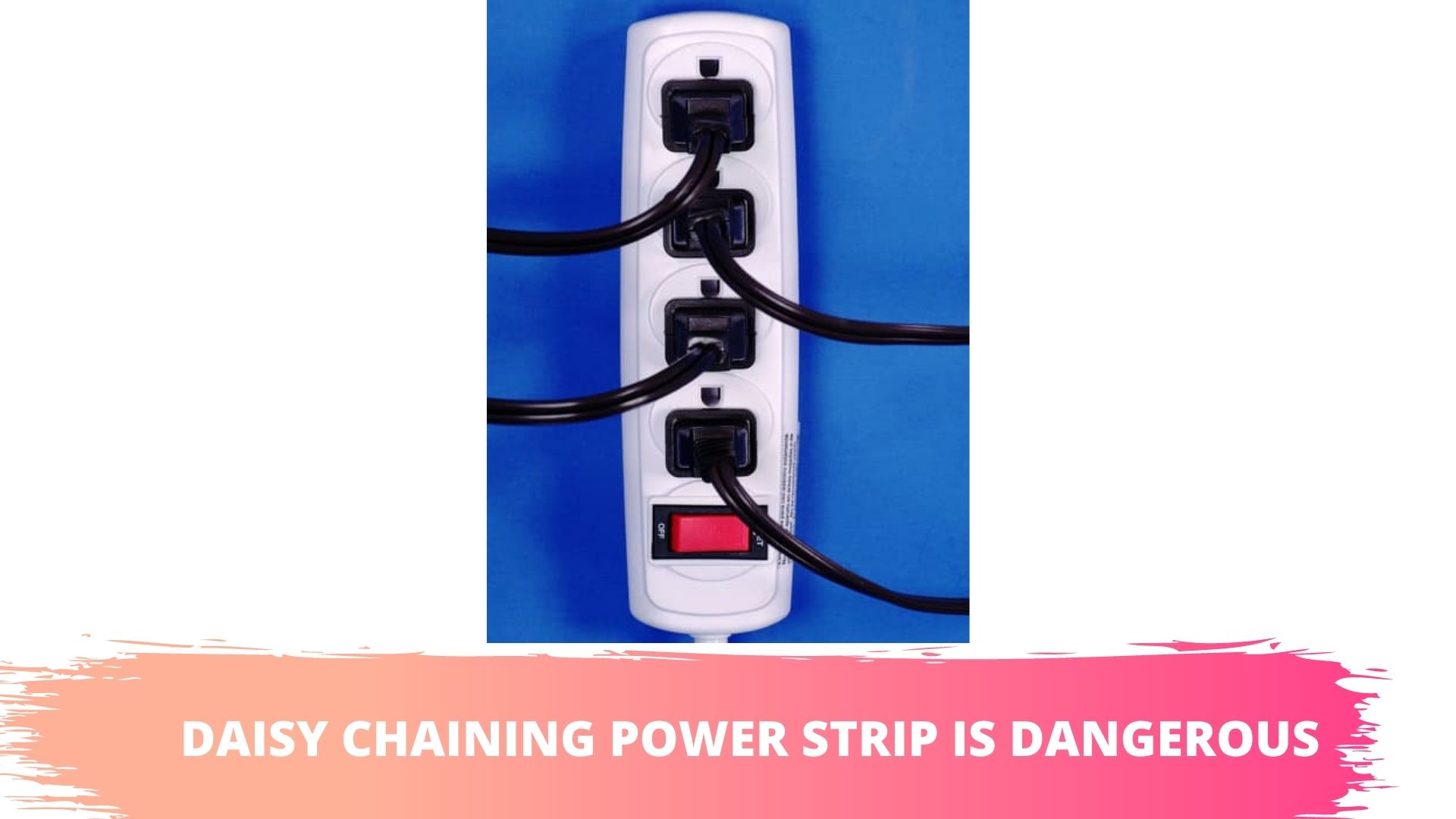 Daisy-chaining is a hazard, one that electrical professionals and the authorities frown upon. However, it is also quite common. Most people have so many electronic devices that the wall outlets in the average home or office cannot cater to all of them.

You would expect an ordinary power strip to solve this problem. However, even with four, six, or ten outlets, sometimes, one power strip cannot meet all the electrical needs at hand, particularly in homes or offices with multiple inhabitants.

People solve this problem by daisy-chaining power strips, a rational answer that can add an infinite number of outlets to a given space. But if the solution is so obviously effective, why are the authorities so determined to oppose it? Their attitude will make sense once you understand how daisy-chaining works and the dangers associated with the practice, of which there are quite a few.

Daisy-chaining is the process of wiring multiple devices together.

It is somewhat broad, designed to include computer hardware and Network topologies. Where power strips are concerned, the term simply refers to a situation where one power strip is plugged into another.

Why Not Daisy Chaining Power Strips?

It was already mentioned above that daisy-chaining is a bad idea, or at the very least, the authorities frown upon the practice. But why is that? What do they have against daisy-chaining? To understand their reasoning, you have to take the following into account:

Every electrical component in a home or office has a rating. That includes the circuit breaker, the wiring, and the wall outlets. It also includes the power strip.

Many of the accidents recorded in the average home occur because an individual plugged an appliance into a power strip or wall outlet without taking its amperage rating into account.

The rating tells you the amount of electricity a particular device or conductor can carry. If you exceed that rating, the conductors in question will become so hot that a fire will start.

Where power strips are concerned, the amount of electricity they can carry is typically determined by the gauge, a unit of measurement that reveals a cord’s thickness.

If an appliance is drawing more power than the power strip’s gauge can handle, it will overload.

Now that you know that conductors can overload when you expose them to more power than their rating permits, it won’t take you long to understand the threat that daisy-chaining poses. You have to take both the wall outlet and the power strips into account:

Wall outlets in most homes are unlikely to overload because, in most cases, you can only use them to power one or two appliances at a time. This presumes that you have plugged these appliances directly into the wall outlet.

A power strip changes everything. You cannot overload your circuit by plugging a power strip into one of its wall outlets. After all, power strips don’t use electricity. However, if you attach multiple appliances to the power strip’s outlets, and if the total amperage of those appliances exceeds the capacity of the circuit in question, you will cause an overload.

Daisy-chaining makes this threat even more potent. When you plug a second power strip into the first, the appliances attached to the second power strip will add to the load the circuit has to carry. Don’t forget: all the power your power strips are distributing is coming from the same wall outlet.

As you now know, like the circuit breaker, power strips have ratings. The circuit isn’t the only one at risk of overloading. The first power strip has to carry the load of every appliance attached to the power strips connected down the line.

The more power strips you have daisy-chained, the more appliances you will attach down the line, the bigger the load the first power strip is expected to carry. You may overload the power strip.

You could argue that you are too smart to overwhelm your collection of daisy-chained power strips with appliances. But quantity isn’t the only problem.

If the first power strip has thin wires with a lower gauge, the higher gauges of the power strips connected downstream won’t help you.

The power strips connected downstream might be strong enough to carry all the current drawn by the appliances attached to their outlets, but their collective load will overwhelm the first power strip whose capacity is simply lacking.

Even if the first power strip has sufficient capacity, heavy appliances connected to the power strips downstream such as fridges and heaters can still overload it. There are too many risks associated with daisy-chaining.

Is It Dangerous to Daisy-Chain Power Strips?

Many people are more inclined to say ‘No’ because daisy-chaining happens every day. People do it all the time and most of them survive the experience.

That being said, Hunker has pointed out that over three thousand residential fires happen every year in the United States because of extension cords.

Daisy-chaining is one of the causes of these fires, along with overloaded circuits, damaged cords, short circuits, and the like.

The people that daisy chain power strips argue that the practice is only dangerous if you overload the circuit or the power strips. They will tell you that the average property has a circuit breaker that will protect you and your appliances in the event of an overload. They also argue that any individual whose power strips have fuses can avoid the catastrophes that occur when a power strip is overwhelmed.

Professional electricians have continued to oppose daisy-chaining all the same. They believe that the potential consequences are not worth the benefits. Daisy-chaining can cause electrical fires and electrocutions. These professionals expect homeowners and office managers to look for safer, more permanent solutions such as the installation of additional wall outlets.

How Many Power Strips Can You Daisy Chain?

Any professional you consult will tell you that the perfect number of power strips to daisy chain is zero. They will insist that you shouldn’t daisy chain any power strips. But if you are determined to do so all the same, the length is one of your biggest issues.

As HowToGeek will tell you, the longer the cord, the more resistance the current will encounter, the more heat it will generate. Resistance also causes the voltage to drop. Appliances attached to the end of a long cord do not receive as much power as they need.

Professional electricians keep opposing daisy-chaining because they have the law on their side. Article 110.3(B) of the National Electric Code and 29CFR 19.303(B) (2) of the Occupational Safety and Health Administration (also 1926.403 (B)(2)) oppose daisy-chaining.

From Tricklestar, you will notice that these organizations emphasize the regulations of firms like the Underwriters Laboratories which encourage consumers to connect power strips to ‘Permanently Installed Branch Circuit Receptacles’.

But the NEC and OSHA are not your only concern. The National Fire Protection Association also expects consumers to adhere to the regulations of the NEC where daisy-chaining is concerned. These codes are not just an inconvenience. They allow the authorities to punish you if a fire, property damage, or injuries occur because of daisy-chaining.

How Can You Daisy Chain It?

If you’re determined to daisy chain your power strips despite the warnings of the OSHA and NEC, you have to take certain precautions to avoid disaster:

First of all, check the rating of the power strips and the appliances you want to attach.

The total load of the appliances shouldn’t exceed the capacity of the power strips.

The daisy-chaining should be temporary. Don’t daisy chain your power strips permanently. You can do it every so often to charge a phone or to operate a heavier device. But you shouldn’t make it a habit. The more time you spend daisy-chaining, the greater the chances that something will go wrong.

Daisy-chaining refers to the practice of plugging one power strip into another to multiply the number of outlets at your disposal or to extend the reach of your wall outlet. The practice is popular. But NEC and OSHA regulations prohibit it because it is dangerous.

Because the wall outlet and the first power strip carry the load of all the appliances connected downstream, you ran the risk of overloading your circuit and power strips. It is also worth noting that the more power strips you daisy-chain, the more resistance the current will encounter, the greater the voltage drop, not to mention the heat generated.

Daisy-chaining is a hazard that can cause electrical fires. It introduces too many failure points. The only way to avoid the dangers associated with the practice is to ensure that the total load of the appliances you want to operate doesn’t exceed the capacity of the power strips or the wall outlet. You should also ensure that the daisy-chained power strips are temporary.