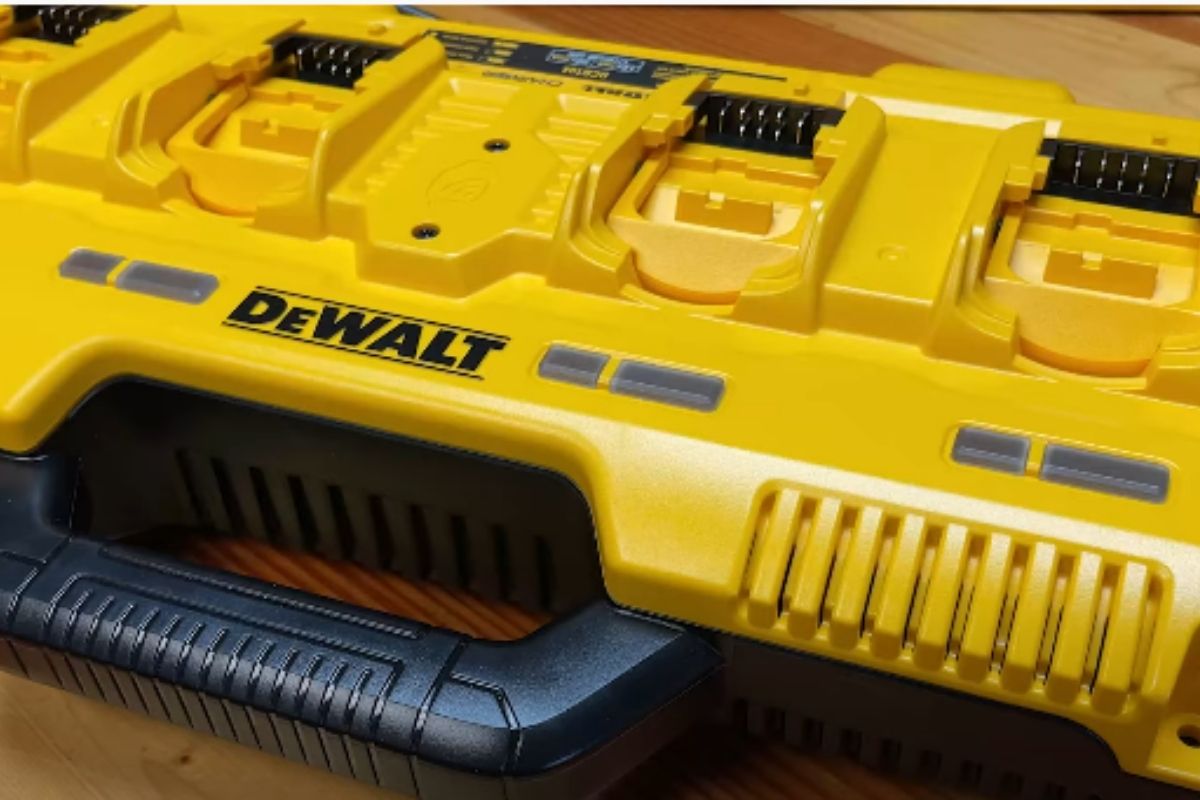 What do the LED lights on your Dewalt Charger mean? Those lights are supposed to help you diagnose the charger and its batteries. If you don’t know what they mean, you can’t troubleshoot your charger.

You will know when the battery is charged because the light will turn green.

This isn’t true for every Dewalt charger.

For instance, according to the Dewalt Support Page, a Dewalt charger will blink continuously to show that the battery is charging.

The LED will only turn a solid red color when charging is complete.

This is why it is essential to check the manual. If you expect your charger to turn green when it finishes charging, you will panic when the blinking red LED becomes a solid red LED.

Remember that red lights are specifically associated with the charging process, regardless of whether the red LED is solid or flashing.

If your batteries are full, but the red LED is still flashing, you have a faulty battery or charger. Either the charger doesn’t realize that the battery is full, or the battery won’t charge.

1). A poor connection between the battery and charger can cause the red LED to flash rapidly.

The testing process involves the following:

1). Activate the multimeter and move the knob to the ‘V’ with the horizontal line underneath.

2). Locate the probes of the multimeter. Connect the black probe (negative) to the common plug. The red probe (positive) goes to the VOLTS connection.

This test is not always necessary. Before you use the multimeter, take a moment to examine the battery. If it has cracks, tears, burn marks, leaks, or any other significant signs of damage, you can confidently conclude that the battery is the cause of the blinking red light.

You have to replace dead batteries. You can’t fix them. Take yours to a recycling station. Because lithium batteries are toxic, you are discouraged from throwing them in the trash.

A red light that flashes once each second signifies a temperature delay.

What Does Orange Light On Dewalt Charger Mean?

You have to consult the manual to get clarification on the meaning of the orange LED.

What Does The Yellow Light Mean On My Dewalt Charger?

Again, you are better off consulting the manual. Do not assume that your Dewalt charger will follow this scheme.

A green light shows that the battery is fully charged.

I want you to keep an eye out for an LED that flashes red and then green. Dewalt chargers tend to blink red when they charge a battery. The green light will only illuminate when the charging process comes to an end.

But if the LEDs have started alternating between a blinking red light and a green light, the charger has tried and failed to charge the battery. More than likely, the battery is defective.

Don’t forget to check the manual.

When the battery is charging, the charger will blink red. Once the battery charges to completion, the red light will turn green.

How To Tell If Dewalt Charger Is Bad?

There is a process that can be used to check the functionality of a Dewalt Battery charger:

1). Connect the charger to a power source such as a wall outlet

2). Connect a battery to the charger. Use a healthy battery that doesn’t have any signs of damage, including leaks and burn marks. Leave the battery to charge.

3). Take the battery out and use a voltmeter to test it. If the pointer is on the right side, the battery has received some charge. The readings will show you the amount of charge the battery received. A negative reading shows that the battery did not receive any charge.

If you’re confident in the battery’s health, you have to assume that the charger is defective. If it can’t charge the battery, it has malfunctioned. You can confirm your theory by inserting a second battery.

If you don’t have a voltmeter, pay attention to the LEDs. If the red light is blinking, the battery is charging. If the yellow LED is illuminated, the battery is too hot or cold. If all the lights are off, you have a defective charger. This assumes that you trust the battery.

1). Dewalt Charger Has No Light

If the charger doesn’t have any illuminated lights, the battery is most likely dead. This is not always the case. Sometimes, you have blown a fuse in the charger. But in most situations, if all the lights are off, you have a dead battery.

You can test the charger by connecting it to another battery pack. If it works, you can conclude that the first battery is dead. If the lights are still off, you have to assume that the charger is at fault.

The lights on a Dewalt Charger are tied to the operations of the device. If the charger is working, the lights will illuminate or flash, especially when you connect a battery. If the lights won’t shine, the charger has stopped working.

You can reach the same conclusion if the charger’s lights go off during a charging session. To confirm that the charger has stopped working, wait for the duration that it usually takes the battery to charge to completion.

Test the battery with a voltmeter. If it doesn’t have any charge, the charger has stopped working.

How To Fix Dewalt Charger?