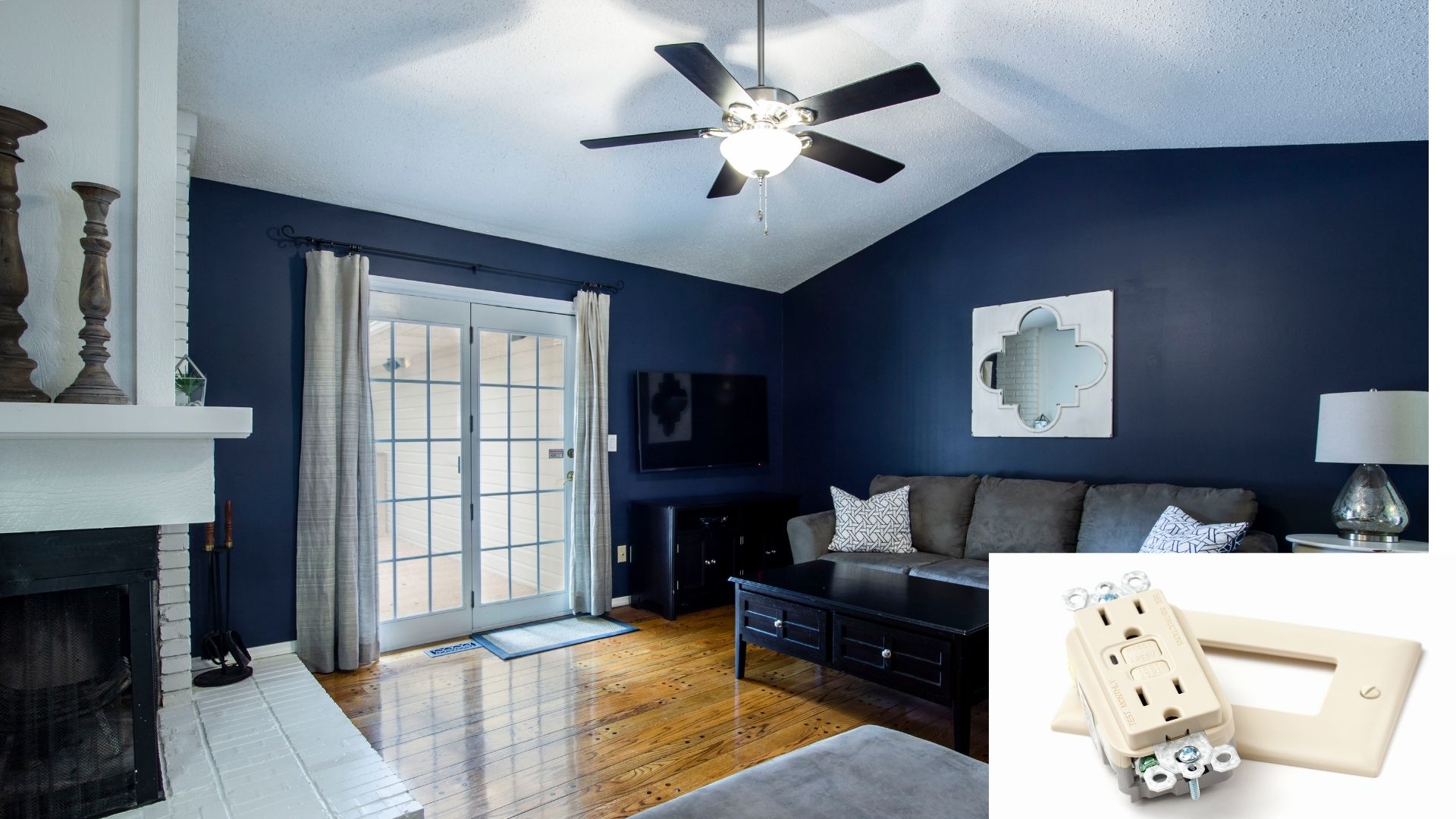 GFCIs are not a luxury. You can use them to prevent potentially fatal shocks. They trip when they realize that the outgoing current is different from the returning current. This signifies a leak. While GFCIs make sense where the conventional bathroom and kitchen devices are concerned, many people don’t know what to make of ceiling fans.

Where is the fan located? Is it hanging in the bathroom, above the bathtub, or over the shower? You have to use GFCIs in places that expose outlets and appliances to moisture. Water can reach a ceiling fan in a bathroom. In that regard, you are better off using GFCIs.

For the most part, you are better off using GFCIs on every outlet in your house. There are exceptions, such as outlets that serve refrigerators. But you would benefit from pairing most appliances with GFCI protection because the technology will give you peace of mind.

You can use your appliances with confidence, knowing that the GFCIs will prevent ground faults from burning your house down or killing your friends and family members. But if you don’t want to use GFCIs on a ceiling fan, is there any reason that would make the practice necessary? These factors can make GFCIs a necessity for ceiling fans:

You have to use GFCIs if you have to pull a chain to make the fan work. In other words, you have to touch the chain while making contact with the ground. You should use GFCI protection in this situation.

2). Use GFCI In Moist Location

You can apply this same logic to fans near swimming pools, spas, and Jacuzzis.

3). Use GFCI For Outlet In Kitchen & Bathroom

If the fan uses an outlet situated in an area that requires GFCI protection, you should install a GFCI. That includes outlets in the kitchen, bathroom, and unfinished basements.

Check the local code. What does it say about ceiling fans and GFCIs?

If the local code expects consumers to apply GFCI protection to ceiling fans, you should act accordingly. If you hire a professional contractor to install the fan, they will investigate the local code beforehand to determine whether or not it has anything to say about ceiling fans. If the local code is silent on the issue, you can do what you want.

5). Use GFCI If Manual Recommends It

If the local code doesn’t care about GFCIs, read the manual to see what the manufacturer says. If they want you to use a GFCI, you should do what they say.

Because they made the ceiling fan, they know what is best for the device. If you don’t agree, you should reach out to the manufacturer. Ask them to explain why the GFCI is necessary. They may respond with a convincing answer.

How To Add GFCI To Ceiling Fan?

Adding GFCI protection to a ceiling fan isn’t particularly difficult. It is a simple matter of running power to the line side and out of the GFCI’s load side. But for many people, it is easier to add GFCI protection to the circuit with the fan. That way, you can protect every device on that circuit.

The process involves the following:

1). Find the main breaker and disconnect it. Make sure you cover the large lugs at the top of the panel. Use rubber or cardboard. They still have electricity running through them because they bring power to the main breaker. You cannot make them safe by simply switching the main breaker off. The last thing you want is to touch these lugs.

3). At this point, you can install the GFCI breaker. Run the white wire from the breaker to the neutral bar. Connect the black circuit wire to the breaker. If you’re satisfied with your work, you can remove the rubber or cardboard from the lugs before reinstalling the covers and switching the main breaker on.

4). You can install the ceiling fan on the circuit with confidence because you know that it has GFCI protection.

But the NEC doesn’t say anything about ceiling fans and GFCIs. However, that doesn’t mean you can do what you want. The NEC has regulations that indirectly apply to ceiling fans, namely:

1). The NEC has a section (110.3(B)) that expects consumers to follow the instructions of the manufacturer whenever they install and use appliances. Therefore, if your manufacturer wants their ceiling fan to use GFCI protection, you must comply.

Check the packaging and manuals that came with the ceiling fan. You can also look at the manufacturer’s website to determine whether or not they recommend GFCIs. If their instructions are unclear, send them a message. Ask for clarification. If they want you to pair their ceiling fan with a GFCI, the NEC expects you to obey.

2). The location is very important. You will find that many manufacturers want homeowners to add GFCIs to ceiling fans in bathrooms, especially if those ceiling fans hang over the shower or bathtub.

You have to install a fan if your bathroom doesn’t have a window. This is a safety measure that improves ventilation. Additionally, the NEC expects outlets in the bathroom to use GFCIs because of their proximity to water.

This is true for outlets in any other location within the vicinity of water. If you have an outlet in a spa, you should think about installing GFCIs. This consideration will affect your wiring decisions if you want to install fans in locations where the switches and outlets are close to water.

While this sounds like an inconvenience, it is worth noting that GFCIs protect people from electrocution and fires.

Why Does My Ceiling Fan Keep Tripping The GFCI?

Don’t be so quick to blame the fan. For all you know, the GFCI is defective. Ask a technician to look at it. They may encourage you to replace it.

You may have a wiring issue. Technicians make mistakes all the time. Maybe you’re sharing the neutrals, or you have loose connections that have created a ground fault.

Fans with speed control can create RFI noise which GFCIs may confuse for a leakage.

GFCIs react to ground faults. Therefore, if the GFCI keeps tripping, you should consider the possibility that a ground fault has occurred. Tripping is caused by shorts (caused by vibrations), loose connections, and overloading. If the fan is in the bathroom, the water probably entered the switch.

You have a wiring issue. More than likely, a contractor tied the neutrals together. This mistake is common among amateurs.

How To Fix A Ceiling Fan That Trips GFCI?

First of all, don’t use a GFCI unless your local code forces you to do so. Devices with motors have a reputation for causing nuisance tripping. People expect fans to trip GFCIs. If this doesn’t bother you, keep using the GFCI. If it bothers you, remove the GFCI.

There are several ways to deal with interference. One is to replace the speed control on the fan. You could also install a lamp debuzzing coil. However, you don’t have to rely on these solutions if you have a high-quality GFCI device.

The quality of GFCI matters. Low-quality products are vulnerable to interference. They may also trip for no apparent reason. But a high-quality GFCI can overcome the effects of interference. Some GFCIs are too sensitive. If your GFCI keeps tripping, get a better one.

Ask a technician to scrutinize the wiring. If you installed the fans and GFCIs yourself, you probably made a mistake. A professional can identify and eliminate these mistakes. They can also resolve loose connections.

GFCIs have a limited lifespan. They can develop basic faults that cause nuisance tripping. For instance, if moisture or debris enters the GFCI, it will trip. A professional can identify these problems. They will either fix these issues or encourage you to get a new GFCI, depending on the extent of the damage.

Don’t forget to look for signs of a ground fault. GFCIs respond to ground faults. Sometimes, they trip because one has occurred. The last thing you want is to reset or replace the GFCI without first identifying the source of the ground fault.

Even worse, you may eliminate the GFCI because of what you perceive to be nuisance tripping without realizing that the GFCI was keeping you safe.