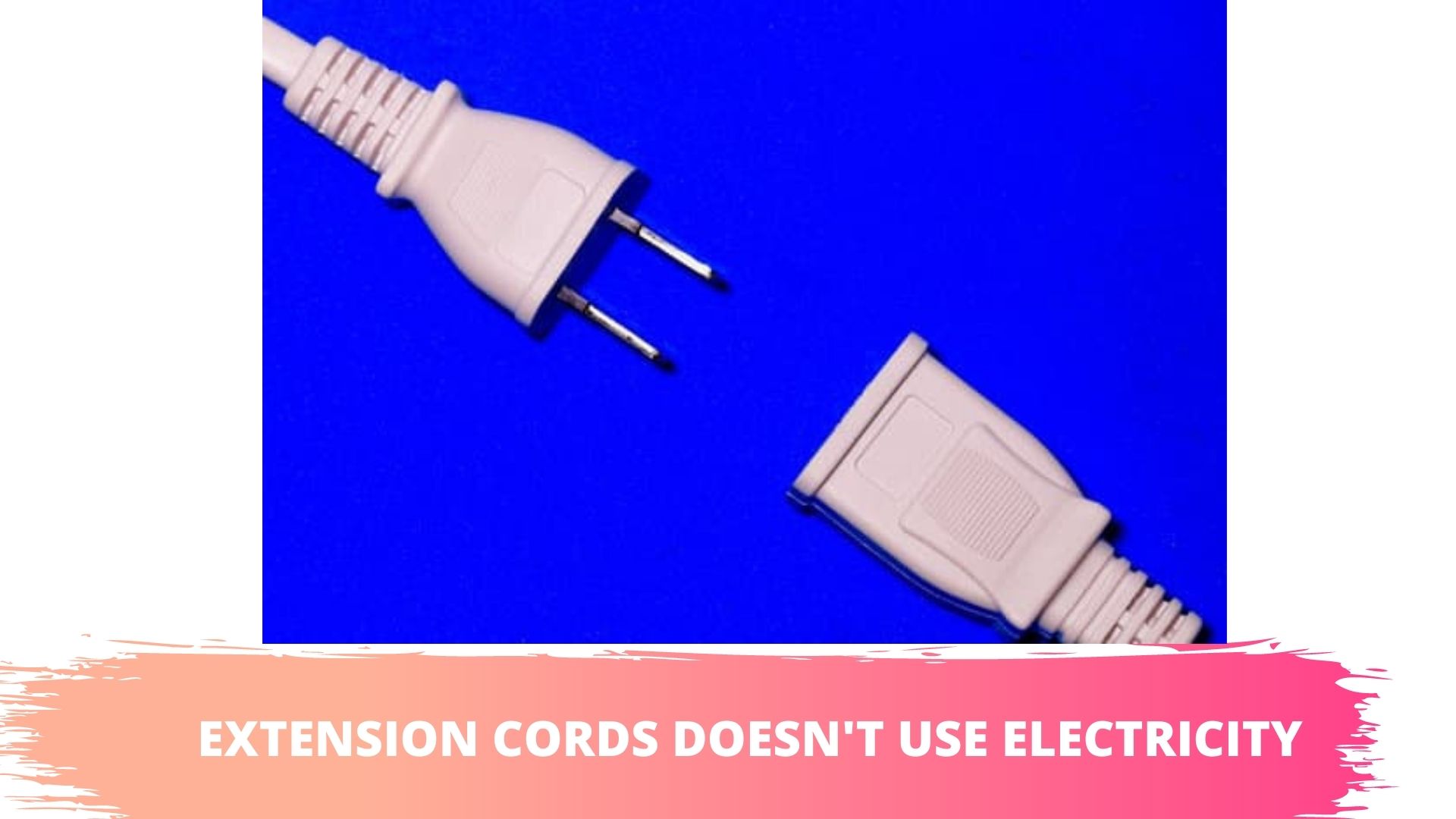 Does extension cord use electricity?

An extension cord doesn’t use electricity. It is merely a conductor that transfers power to the appliances attached to its outlets. As such, it won’t consume vampire power if you leave it plugged in, not unless it has indicator lights and displays.

This question won’t make sense until you realize that vampire electricity is such a big problem for so many households.

According to Boston University,

The average American home has roughly forty products that are always connected to power even when they are not in use.

The homeowners that keep failing to unplug them do not realize that the vampire power those products use adds an estimated $100 to their utility bills. However, while vampire power is a problem where most household devices are concerned, some homeowners cannot tell whether or not it affects extension cords.

They do not even know whether or not extension cords use electricity in the first place. The answers to their questions will vary depending on various factors, including the design of the extension cord, its length, and whether or not appliances have been plugged into its sockets. You have to keep reading to understand how all these factors affect the energy consumption of an extension cord.

What is Vampire Power?

You cannot determine whether or not vampire power affects extension cords without first understanding the meaning behind the term ‘vampire power’.

Vampire power refers to the electricity a device consumes when it isn’t in use.

The term also refers to products that look like they have been deactivated when, in truth, they are simply standing by.

Devices such as smart TVs and computers have components that enable them to start quickly and easily the next time you activate them. But those components require power to remain in operation. They will draw this power from your wall socket if you leave the devices plugged in.

Does Extension Cord Use Electricity?

In most cases, extension cords do not use electricity. They are merely conductors. They transfer power from the wall socket to any appliances connected to their outlets. They do not use any of that power for themselves.

But if that is true, why was the initial answer less definitive. Why did it say ‘It depends’. Well, the design of the extension cord matters. Some devices have indicator lights that are supposed to illuminate when the extension cord is connected to a live power source.

They alert consumers that their extension cord is ready to power their appliance. Those indicator lights use electricity. Now, the amount they use is so small that, in the long run, it won’t affect your electric bill, which is why most technicians will tell you that extension cords don’t use electricity.

The power the indicator lights use is negligible. The same thing applies to smart power strips with displays. The power those displays use is too minuscule to raise your utility bill.

Do Extension Cords Use Electricity When Plugged In?

Now that you know that extension cords don’t use electricity, you can probably answer the question of whether or not they draw vampire power when you leave them plugged in:

If they have special features like indicator lights and displays, they will continue to use electricity if the switch on the wall socket is in the ‘ON’ position. But again, the current they draw is so small that you won’t notice it.

2). No Features and No Appliances

If an extension cord doesn’t have indicator lights and displays, and it doesn’t have any appliances attached to its outlets, it won’t use any electricity.

It is worth reiterating the fact that vampire power is only an issue if the switch on the wall socket is in the ‘ON’ position. If you flip that switch to the ‘OFF’ position, appliances cannot draw vampire power. That includes the indicator lights on extension cords.

You can also achieve similar results by flipping the switch on the extension cord into the ‘OFF’ position, assuming your extension cord has a switch.

Is It Safe To Leave Extension Cords Plugged In?

Yes, it is perfectly safe to leave an extension cord plugged in, especially if it is in good condition. You may encounter issues if sections of the cord are worn out and punctured.

Problems can also arise if the extension cord has been exposed to water or if you have pests in the area that keep chewing the jacket open.

However, in an ideal situation that doesn’t involve pests and water, and abrasions, an extension cord cannot become a hazard simply because you left it plugged in.

On the whole, an extension cord shouldn’t affect your electric bill for better or for worse. However, you have to consider two factors that may come into play depending on your situation:

Whenever a current flows through a conductor, it encounters resistance. This causes voltage drops. According to Hunker,

Those voltage drops are easy to ignore over short distances. The longer the conductor, the greater the voltage drop.

When a significant voltage drop occurs, the current flowing through the conductor has to increase to compensate for the drop.

In other words, by using a long extension cord to operate a powerful appliance, you may inadvertently increase the current you are using to run the machine. Of course, you don’t have to concern yourself with this issue if you have a heavy-gauge.

When electricity encounters resistance in a conductor, heat is generated. Because a longer extension cord has more resistance than its shorter counterpart, you will lose a lot more energy as heat whenever you use a long extension cord to operate a powerful appliance, especially if the extension cord is the wrong gauge.

When you lose power in the extension cord because of the heat generated, the appliance at the end won’t get the electricity it needs. It will draw even more power to meet its needs. In that regard, the use of an extension cord can cause your power consumption to rise.

However, many professionals will argue that the increase in power consumption is insignificant and unlikely to affect your utility bill in the long run.

But it would be inaccurate to suggest that an extension cord increases your power consumption. The power lost to heat, and the additional current that must be drawn to compensate for the voltage drop is negligible. They won’t have a significant impact on your utility bill.