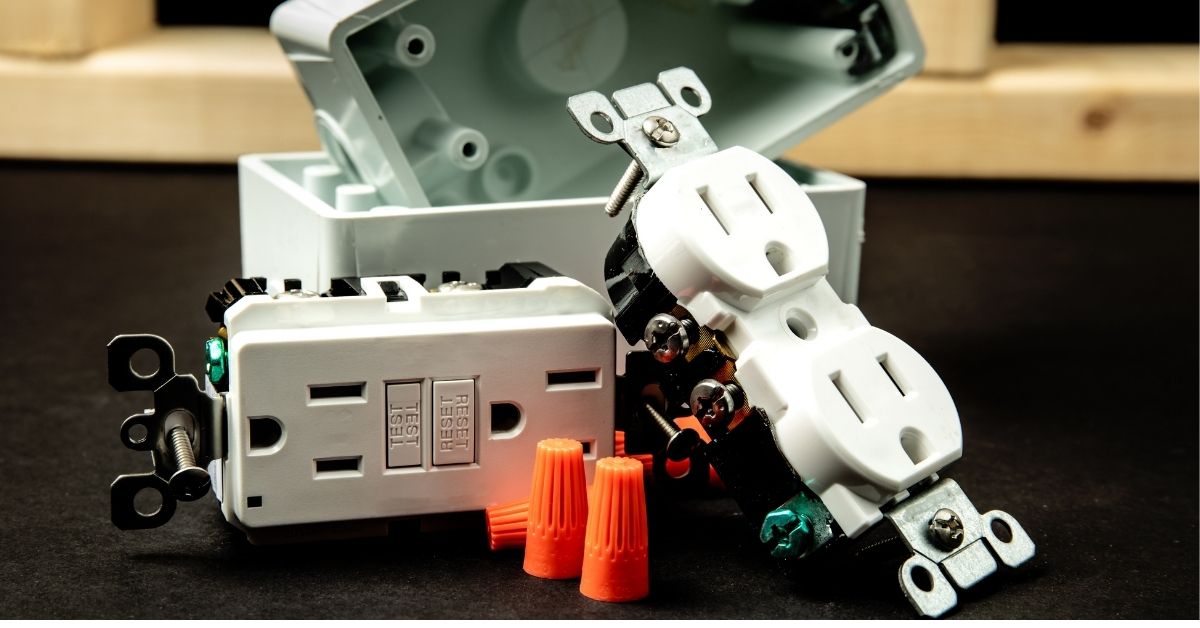 Do you know what every GFCI outlet light means? If you don’t, you should endeavour to learn because some of those lights only flash when the GFCI outlet has an issue. You don’t want to use a GFCI outlet that has malfunctioned simply because you did not take the time to learn what all the GFCI lights mean.

If the red light is on, it means that the GFCI has a problem that requires your attention.

This doesn’t tell you what has gone wrong. It simply provides a general warning that something is wrong.

Clicking sound means that the GFCI outlet has tripped in response to a ground fault. If the clicking is continuous and the outlet is showing a red light, more than likely, the GFCI is trying and failing to trip properly.

Modern GFCIs are designed to carry out regular internal tests. If an outlet fails a test, it will trip. The GFCI Outlet light that indicates a problem (the red light) will turn on to let you know that a problem has occurred, one that requires your attention.

What Does It Mean When A GFCI Outlet Flashes Red?

When the GFCI turns on, it will carry out a self-test. This will cause the GFCI outlet light to flash red, at least momentarily. Eventually, if everything goes according to plan, it will turn green.

What Does It Mean When A GFCI Is Blinking Red?

GFCI Red Light Stays On – Why?

If the red light has refused to go off despite your attempts to reset the GFCI, you should look for any devices downstream that are causing the GFCI to keep tripping. It could also mean that the GFCI receptacle is defective.

The red light means that the GFCI outlet has tripped. It won’t work until you reset it. This assumes that the factors that caused the outlet to trip have been resolved. If they haven’t, either the GFCI will refuse to work altogether or it will keep tripping.

GFCI Outlet Has Red Light On But No Power – Why?

A red light will come on when the GFCI outlet trips. In other words, a ground fault occurred and the power to the outlet was cut. The power will remain off until you reset the GFCI.

This should restore power to the outlet. It should also eliminate the red light. If the red light is on but the GFCI receptacle is neither defective nor damaged, investigate the devices downstream. If you are using one GFCI to protect multiple outlets, a problem at an outlet downstream can cause the GFCI to trip.

Devices with motors have a reputation for causing nuisance tripping, which is why some people discourage homeowners from plugging appliances like refrigerators into GFCIs. If the red light has persisted and you cannot find any problems downstream, replace the GFCI outlet. it has gone bad.

If the GFCI outlet has refused to reset and the red light is on, you have to replace the GFCI. It is either damaged or defective. Get a new one. You cannot trust the old one to keep you safe.

A green light proves that the GFCI carried out an internal test which it passed. In other words, the GFCI outlet is working as expected and it has power.

The green GFCI outlet light will stay ON in situations where the outlet is working as expected. The GFCI’s protective mechanisms are operational. You don’t have to do anything.

Why GFCI Outlet Has Green Light Off?

If the green GFCI outlet light is off, what other light is on?

Why GFCI Outlet Has Green Light But No Power?

Some GFCI models use a green light to show that the GFCI has tripped. You should try resetting it. If that doesn’t work, hire an electrician to check your work. More than likely, you did not wire the outlet properly.

Why GFCI Green Light Stays On?

The GFCI outlet green light should stay on. It shows that the GFCI outlet has passed the self-test. It has power and you can trust it to keep you and your equipment safe from a ground fault.

GFCI Outlet Green Light Not On – Why?

If the green light is off, what other light is on?

If the light is red because the GFCI failed a self-test, you have to reset it by pressing the ‘TEST’ and ‘RESET’ buttons. If a ground fault caused the receptacle to trip, you can simply press the ‘RESET’ button.

If resetting the outlet has not solved the problem, the receptacle has gone bad. Recheck the wiring. If you cannot find a problem, get a new GFCI. This applies to GFCI outlets that do not have a light.

If resetting the receptacle has not worked, and you have confirmed that the circuit has power, get a new GFCI.

It is possible that your GFCI has an unconventional design that doesn’t follow the standard norms. In such a case, you need the manual to tell you what a flickering green light means.

GFCI Outlet Not Working No Green Light – Why?

The green light will only come on if the outlet is working properly and it has power. If the green light goes off and the outlet stops working, it means that the outlet has either tripped or the circuit doesn’t have power.

You can only blame the circuit if all the indicator lights are off. If the light is red, the GFCI has a problem.

GFCI Outlet No Green Light – Why?

What Does A Yellow Light Mean on GFCI Outlet?

A yellow light shows that the outlet has tripped. You have to reset it to restore power, which is a simple matter of pressing the ‘RESET’ button.

The GFCI outlet tripped because it detected a problem and it won’t allow you to reset the receptacle because the problem has not been fixed. In other words, it is trying to keep you safe. You should check the wiring before you panic. It is also worth noting that a GFCI outlet can flash yellow when it has reached the end of its life.

Why Does My GFCI Yellow Light On But No Power?

A yellow light means that the GFCI encountered a problem and tripped, turning itself off to protect the consumer. Yellow light can indicate that a receptacle has reached the end of its life. In other words, it has stopped working altogether and you should replace it.

Why Does My GFCI Outlet Have A Yellow Light?

A yellow light is a sign that the GFCI has tripped. Either the GFCI itself is at fault or an outlet downstream has encountered a problem such as a ground fault or short circuit that has caused the GFCI to trip.

Sometimes, the yellow light is a sign that you need to get a new GFCI outlet because the old one has reached the end of its life.

What Does Orange Light On GFCI Outlet Mean?

GFCI Outlet Orange Light On But No Power – Why?

If the orange light is on and the power is off, the GFCI has tripped. It is worth noting that some people confuse the yellow light for the orange light and vice versa. This is why many manufacturers prefer to call this light ‘Amber’.

How To Fix Orange Light On GFCI Outlet?

If the GFCI doesn’t have power, you can just reset it by pressing the ‘TEST’ button first, and then the ‘RESET’ button afterwards. This will solve the problem in the short term if the outlet had tripped. Make sure you press the ‘RESET button all the way. In some cases, you have to apply a lot of pressure.

If the GFCI keeps tripping, you have to investigate the devices plugged into the GFCI as well as the devices connected to the outlets downstream.

GFCI Outlet No Light – Why?

GFCI Outlet Not Working No Light – Why?

The GFCI receptacle might be faulty, defective, damaged, or dead. You should also check the wiring. Though, in many cases, the GFCI has simply tripped. If that isn’t the case, for various reasons, the circuit has stopped providing power to the GFCI outlet.

GFCI Outlet Works But No Green Light – Why?

You probably have a GFCI outlet that is not supposed to show a green light when it is working properly. Indicator lights do not work the same way with every single GFCI outlet. If the green light on your GFCI only comes on when the GFCI outlet has power, the GFCI has most likely developed a minor defect. You see this in cheap GFCIs.