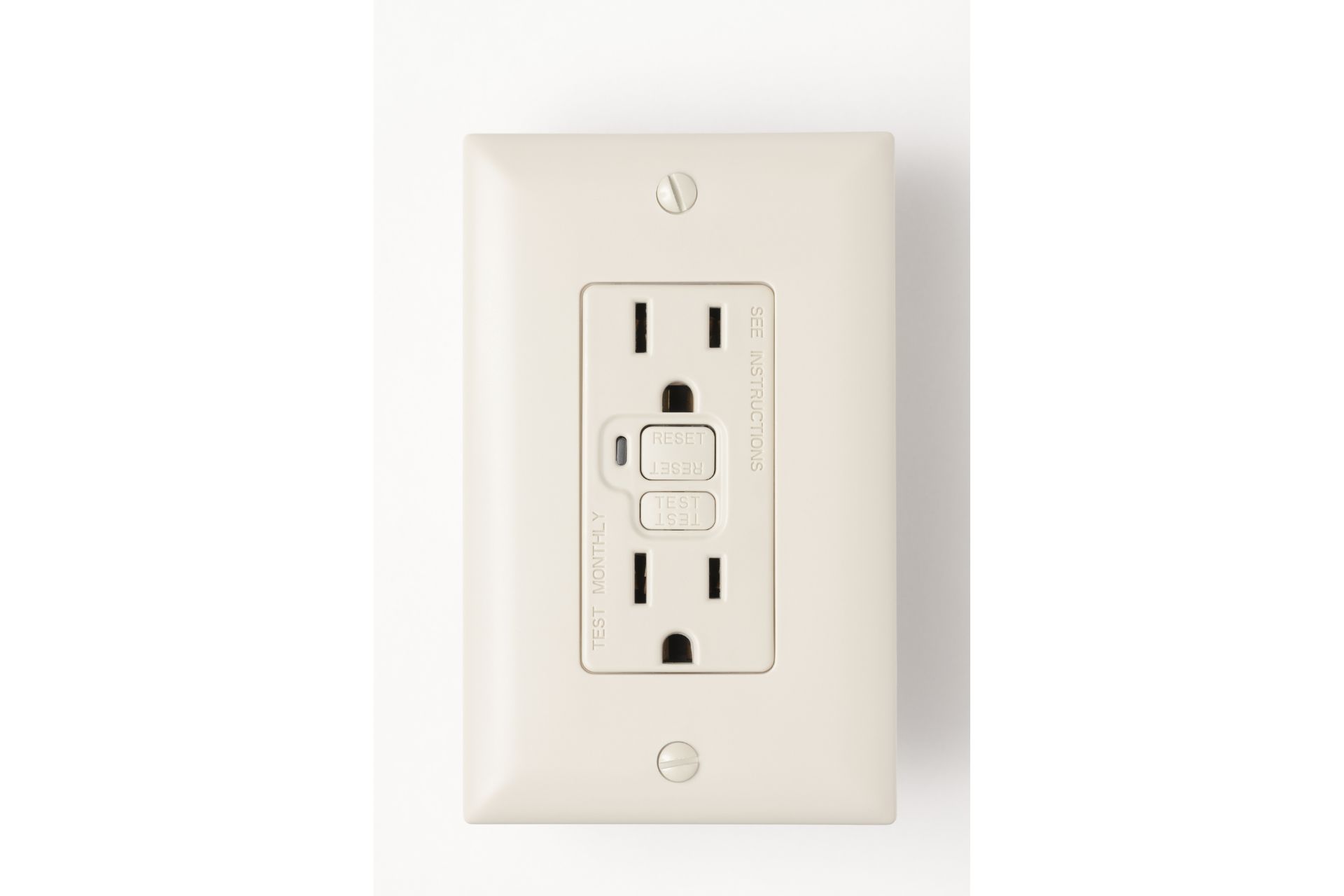 GFCIs are a good thing. After all, they are supposed to protect your house from fires and electrocution by shutting the power in a receptacle off when things go wrong. However, GFCIs can become a nuisance if they keep tripping. Finding the source of the continuous tripping is easier said than done. Fortunately, this guide has some answers. It will show you why some GFCIs trip in response to light switches, fans, and breakers.

The GFCI operates by analyzing the voltage going out of the panel and coming back in. It expects a balance between the two. An imbalance will occur when the electricity flows through a different conductor.

Once the GFCI notices that the returning current doesn’t match the outgoing current, it will trip. Tying the neutral and ground connections together will produce a similar result.

If the fixture is okay, turn your attention to the light switch. Clearly, you have loose wiring somewhere. The light switch is a decent place to begin your search.

You should also consider the possibility that you have a faulty switch. Switches can develop faults for various reasons, including poor wiring, moisture, physical damage, factory defects, and more.

GFCIs trip because they are defective. Where did you buy the GFCI? Do you trust the brand? Like conventional outlets, some GFCIs are better than others. Some GFCI brands have a stronger reputation than others.

Many homes avoid GFCIs because they are more expensive than their traditional counterparts. And when they buy GFCIs, they typically settle for cheaper brands.

They don’t realize that cheaper brands are also less trustworthy. They cannot stand the test of time, which is why their price tags are so low. Admittedly, you can also buy GFCIs with factory defects from reputable brands. But that is less likely to occur.

You can blame tripping on deteriorating wiring. Cables have limited lifespans. At some point, they will wear out. The rate at which they deteriorate depends on the setting.

Conductors exposed to dangerous elements such as extreme heat and direct sunlight tend to wear out faster.

Fixing a tripping GFCI is not that difficult if you know the factors causing the device to trip. For instance:

1). GFCI is tripping because the light switch is faulty. If that is the case, get a new light switch.

2). You don’t have to buy a new light switch to stop the continuous tripping in the GFCI. Some light switches seem faulty because their wires are loose. If this is true for your switch, the simplest solution is to secure the loose connections.

But some laypeople cannot perform this task because loose connections are not always restricted to the light switch. Unless you’re ready to scrutinize every connection on the circuit, you are better off leaving this task in the hands of an expert. They know what to look for.

3). Are the wires worn out? Get replacements. Again, a layperson cannot perform this task. Some of them don’t even know what worn-out cables look like. Others may attempt to rip the conductors out of the walls without shutting the power off.

Let a licensed electrician do the difficult work of replacing the damaged or worn-out wires.

4). If you wired the GFCI yourself, you probably connected the neutral to the ground. In other words, you can’t be trusted to fix this problem. Leave it in the hands of a contractor.

Although, if you have learned from your mistakes and you have successfully wired other GFCIs, you can try rewiring the faulty GFCI.

5). You must replace damaged and defective GFCIs, especially if they keep tripping even though you wired them appropriately. Look for signs of moisture and debris. These elements can lead to incessant tripping.

You can dry wet GFCIs and remove the debris. But if the GFCI is still tripping, get a new one.

GFCI Tripping When Ceiling Fan Turned On – Why?

If moisture enters the receptacle box, the GFCI will trip repeatedly. You see this in outlets installed outside or in damp locations like the bathroom.

Similar problems may occur if you have a faulty electrical outlet. GFCIs are not immune to malfunctions. And if a GFCI receptacle develops a fault, it may trip repeatedly even though you wired the device correctly.

If you can’t blame the tripping on a faulty GFCI or moisture, keep an eye out for the following:

A fan can trip a GFCI because an overload has produced a ground fault. You cannot always predict the response you will get from a GFCI when an overload occurs, especially when your home experiences a short circuit.

Apparently, the fan has speed controls that interrupt the GFCI’s operations with the noise they generate. Dimmers do the same thing.

Even if the fan and GFCI are on different circuits, the fan can still trip the GFCI with the spikes it throws on the power line. This is why laypeople are encouraged to consult professional contractors.

It won’t occur to a layperson to blame the tripping on a fan on a different circuit. The average homeowner will focus their investigation on the devices that share the GFCI’s circuit.

You wired the GFCI poorly. Poor wiring can take various forms. Let’s take a situation where the neutrals from three circuits are tied together.

When this happens, a fan on one circuit will trip the GFCI on a different circuit. But again, it would never occur to a layperson to blame the tripping on fans from other circuits.

This is why professional contractors are so important. They can identify such wiring errors because they know what to look for.

1). Replace dead GFCIs and fans. Some GFCIs can be fixed. The same goes for the fan. But if the contractor tells you to buy replacements, you should listen.

2). Even if you have healthy GFCIs, look for higher-quality replacements. Older, weaker GFCIs will continue to trip because of the interference. High-quality GFCIs can resist this interference. Although, you also have the option of adding a surge suppressor to the fan control load side.

3). Ask a contractor to fix the wiring errors. That includes any neutrals you accidentally tied together. They can also replace damaged wires.

4). Remove moisture and debris from the receptacle box.

GFCI Trips When Turning Off Exhaust Fan – Why?

The motor generates a spike that interferes with the GFCI. Inductive circuits store energy which they release when the magnetic field collapses. The GFCI reacts to the resulting imbalance because the current leaving the circuit has exceeded the current coming into the circuit. You see these reactions in sensitive GFCIs.

Some other culprits for you to consider include moisture and debris in the motor or GFCI.

You don’t have quite as many options at your disposal where this problem is concerned. Besides removing the moisture and debris, you can try buying a better GFCI, one that doesn’t have the same sensitivity as your current model.

I also suggest placing the fan circuit on the line side instead of the load side.

GFCI Trips When Breaker Is Turned On – Why?

One of the most common is overloading, which occurs because the GFCI is protecting too many appliances. Therefore, it will trip the moment you turn the breaker on. You see this situation in houses where one GFCI is protecting multiple outlets downstream. In these scenarios, it is very easy to overwhelm the GFCI.

If this doesn’t apply to your situation, look at the wiring. If you installed the GFCI yourself, you probably connected the neutrals together. This error can lead to incessant tripping because the GFCI can detect an imbalance.

Check the GFCI for damage. Some GFCIs trip when you turn the current on because they are damaged. Either you destroyed them, or they came with factory defects.

Check the other GFCIs in the house. Do they also trip when you turn the power on? If they don’t, the tripping GFCI is damaged. Get a new one.

If you wired the device yourself, ask a contractor to inspect your work for mistakes. If you connected the neutrals, they can resolve this issue before it does further harm.

If you suspect an overload, disconnect some of the appliances before turning the breaker on. If the tripping stops, you can confidently conclude that the GFCI is protecting too many appliances.

The solution is to install additional GFCIs. Don’t force one GFCI to protect more appliances than it can handle.