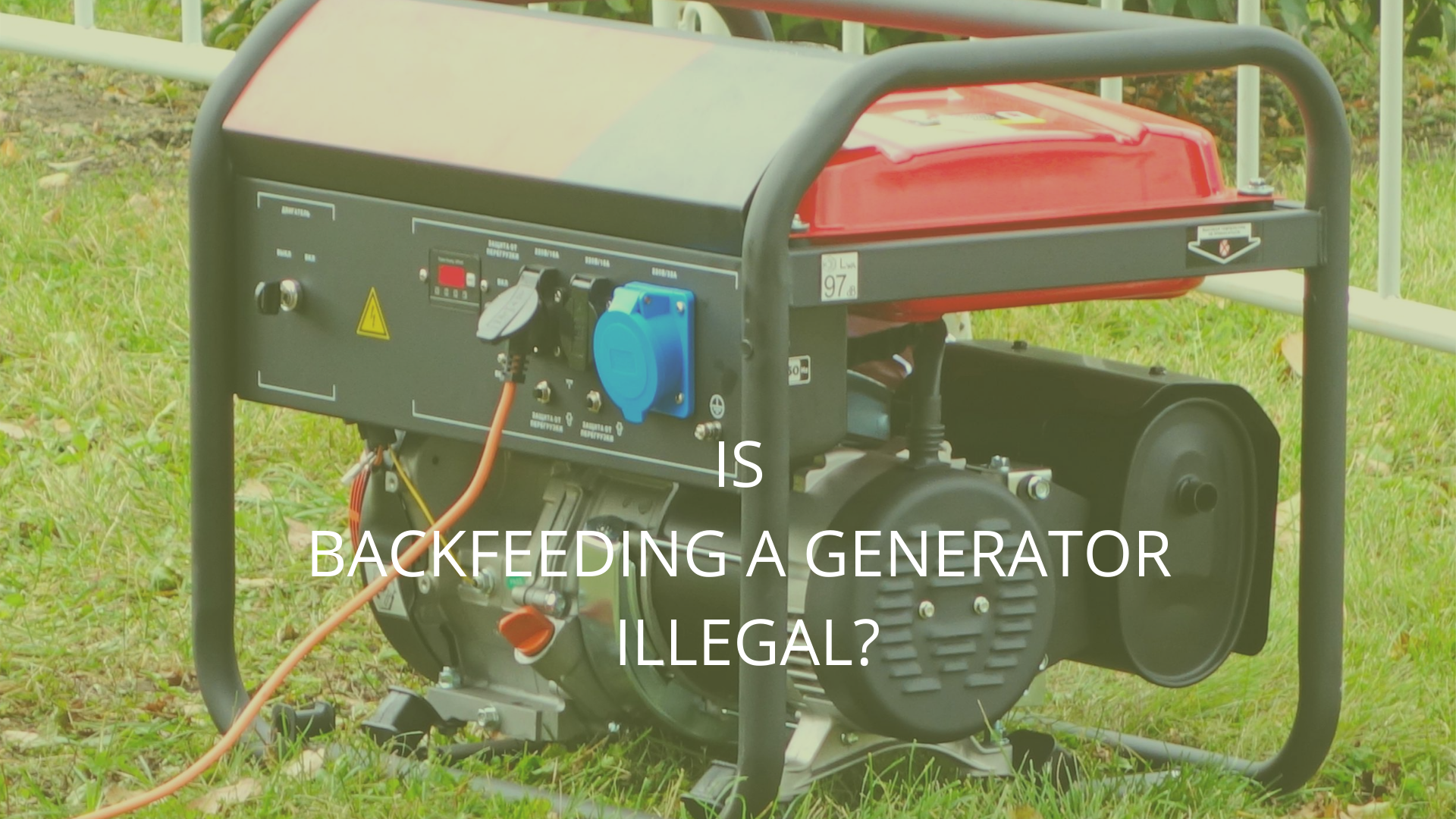 Have you ever thought you might be backfeeding an appliance unintentionally? It might be due to a handyman’s shoddy work, a contractor’s attempt to save a few bucks, or even your father trying to expertly get the generator to work. Is Backfeeding a generator illegal?

Backfeeding your generator is a risky and illegal practice forbidden by U.S. National Electric Code. If you still persist in backfeeding your home’s electrical framework and harm or cause the demise of a utility worker, you will be held responsible.

You could be living in imminent danger if there is any electrical impairment or overcompensation in your house. This could also turn to hundreds to millions of dollars of financial expenditure and not to mention the irreplaceable loss of life.

Generators are lifesavers for sudden and prolonged power outages especially in hot, humid, or tropical countries who largely rely on them. However, if your generator is not installed or used properly, it poses a risk for you, your family, neighbors, and even line workers.

A serious risk is when a generator is improperly installed allowing it to back feed electricity into the power lines. Backfeeding a generator is illegal and dangerous. Read on to find out more about the issue and how to avoid it.

What does ‘Backfeeding a generator’ mean?

Backfeeding is connecting an appliance directly to the source of power. Backfeeding situations happen when a generator is directly connected to the main switch. This causes the power that is created by the generator to feed into or energize the utility lines that serve your home.

Let us elaborate – Natural disasters can destroy the lines and cause unprecedented power outages.

This creates electrical energy to backflow into the lines and eventually short circuit. This creates a safety hazard within the home as well as for the utility crews working to restore service. This can also be dangerous for others who are served by this power line and may not realize it has been energized. If your generator is backfeeding when the power is restored, it can damage your appliances, generator, and even cause blast injuries.

When you backfeed a generator, you use a two-male-sided extension cord to make a direct connection between your home power outlet and generator. As a result, the current flows backward and gets redistributed.

You can check out this video to know more in detail about it!

This summary includes two types of backfeeding that might happen anytime catching you and your family completely off-guard.

Technological advancement and streamlining of buyer power equipment (such as wind turbines and solar powered systems) has prompted an expansion of consumers who may deliver more electricity than they expend during peak production. If bolstered by their utility supplier, the extra may be sent to a main grid.

This procedure makes the customer a transitory maker while the progression of electrical force stays reversed. When backfeeding is played out along these lines, electric utility suppliers introduce an electrical meter for net metering. If these trips, it can lead to mass disasters within seconds.

A typical wellspring of unexpected backfeeding is an electrical generator (usually a portable one) that has shoddy fixing directly to the electrical framework. A properly installed generator consolidates the utilization of a transfer switch to guarantee that the mainline of the building remains switched off while the generator is working.

In the ill-advised utilization of the transfer switch, inadvertent backfeeding may happen when the current generated is reversed into meeting the line current. Since an electrical transformer works in two bearings, the electrical force produced from the generator can backfeed through the transformer and empower the dissemination line to which the transformer is associated to. This may lead to a fatal explosion.

The perils of backfeeding

While backfeeding may appear to be a simple approach to control your entire home, I will caution you against it as charging utility lines this way is hazardous and unlawful.

A short circuit is created when electrical flow finds an alternate pathway of lesser resistance. This causes the wires to heat up, melting the fuse. This results in sparking and may also start a fire.

By backfeeding the generator into your home, you nullify the meld in your capacity board. For those of you who may not know, a fuse is an automatic electrical switch that shields an electric circuit from a short or over-burden of the flow of current. When your electrical switch trips it stops naturally, typically to forestall harmful overheating.

Mostly, these flames start when the property holder’s line power comes back on. At that point, there are two wellsprings of intensity streaming to and from between the board and the generator. This causes the overburden that we referenced before which represents an enormous fire hazard either at the board or the generator itself.

In one such occurrence a backfed generator burst into flames, the fuel tank detonated and set the client’s home as well as a neighbor’s home ablaze. The story of this extraordinary model can be found here.

The illegality of backfeeding

Apart from personal damages, you ought to know that backfeeding your generator is illegal by the United States National Electrical Code – and no, that is not the legislature being overextending. There is a valid justification for this.

If you backfeed your generator, the power that you are creating through your generator can be steered back through your home into the electrical lattice. This implies if a utility worker is fixing the lines, they are in danger of electrocution. The lines they are sorting should be dead. In the event of a generator being backfed there is the danger of live current passage through the lines during servicing.

Would you like to be answerable for someone’s life? I do not think so.

Why backfeeding is so perilous?

As discussed, the dangers of backfeeding stop at nothing and often claim innocent lives. The reverse looping of current and short-circuiting makes backfeeding hazardous. But what really happens during these phenomena? How does your generator burst up into flames?

It causes a short circuit

A short circuit is an irregular association between two ends of an electric circuit at various voltages and can cause circuit damage, overheating, fire, or blast. There are situations where short circuits are caused purposefully, for instance, by backfeeding a generator.

Too much current flowing through a circuit causes the fuse to melt. A fuse is a thin band of metal that gives resistance to the flow of current. In its absence, uncontrolled amps of current are allowed to pass through which causes overheating and explosion of the circuit.

The explosion can cause sparks that other wires can catch on, starting a fire.

Within a few microseconds, a short circuit can send more current than the typical working current of a system.

In an inappropriate setup, the overcurrent from a short circuit may cause heating due to resistance to the flow of current in the circuit leaving behind helpless conductivity. This over heating causes sparks that grow into dangerous fires.

But these damages from short circuits can be decreased or forestalled by utilizing wires, circuit breakers, or other overburden assurances. These disengage the force in response to unreasonable current.

How to avoid backfeeding?

The only way to avoid a major incident that is a direct result of backfeeding is to simply not use this dangerous and illegal method. It is better to wait a few hours in the dark rather than watch your house go up in flames.

You may ask if it is okay to backfeed if the main switch is turned off.

Switching off the main switch reduces the risk, however, somebody’s life may depend on doing so. There is also no assurance that another person won’t just turn on the main switch again. This gives no protection against accidental powering of utility lines or exposing yourself to the danger of an electrical shock.

With backfeeding being so dangerous, you may now ask what safer solutions are available for surviving a power breakdown in your area.

How grid design considerations can help?

To manage costs and to ease operational statistics, most circuits placed by electric service teams are planned with the presumption that power consistently streams a single way. An interconnection prevents backfeeding from the consumer to the main electrical grid. This interconnection design can be incorporated in buildings by installing expensive equipment that keeps the power relaying between the consumer and the main supply system. It does this whilst keeping the whole system cushioned from the perils of backfeeding simultaneously.

Expenses might be limited by constraining conveyed power to minimally above local expenditure. This condition is ensured by introducing a reverse force cutoff transfer that opens if backfeeding happens, thus breaking the circuit.

Can I connect a generator to the house through dryer outlet?

I won’t suggest you to connect a generator to the house through dryer oultet. Even if you connect it, you need to connect it with precautions.

You can follow these steps to safely plug your generator to the house with the aid of a dryer outlet.

Can I use a transfer switch?

Using a transfer switch is the safest way to connect your generator to use its power.

A transfer switch is a dongle that relays current between two power sources; in this case your generator and the electrical panel of your home.

This exchange switch permits you to have your generator give the capacity to the circuits you need to control in case of a blackout. With the introduction of a transfer switch, you no longer require extension wires for every individual apparatus which makes for a safe, up-to-code establishment.

Why you need a transfer switch?

Even though it is not imperative to use a transfer switch, I will list reasons that should be enough to compel you to install one right away.

Can I Backfeed generator through 110v outlet?

Backfeeding your generator is a risky and illegal practice forbidden by U.S. National Electric Code.. You will face an undeniable chance of criminal arraignment for your activities. Furthermore, even if your activities don’t harm anybody, if the power company finds out that you are backfeeding their lines, you will be heavily fined. You will also be reported to the authorities or the utility may even disengage the electrical supply your home.

Be protected and stay away from these issues. Introduce a manual exchange switch or recruit a certified circuit tester to do it. Instead of placing your and others life at risk, just stay prepared for a power outage. Backfeeding is not worth the threat or the hazard.