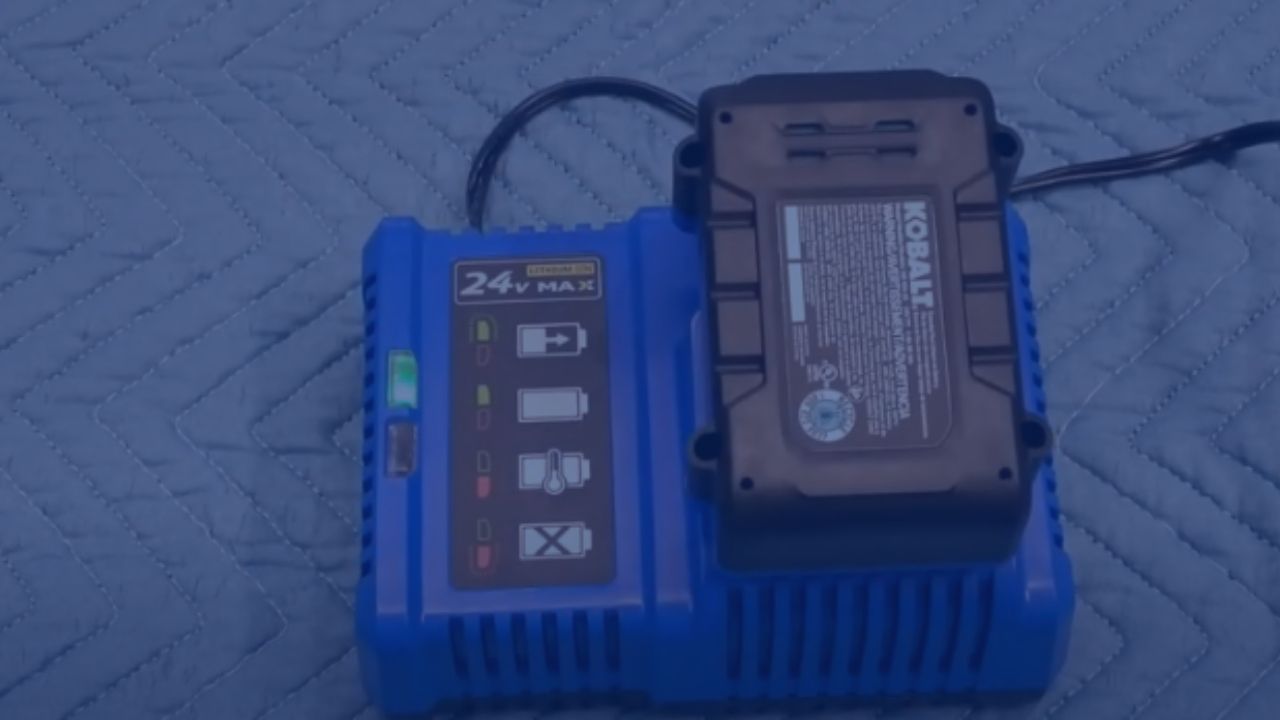 With Kobalt chargers, a blinking red light shows that the battery has a fault.

If you have some experience with battery chargers, you may interpret the blinking red light as a sign that the device is charging the battery. But that is not true for Kobalt chargers. They do not use a blinking red light to signify a charging state.

These are just a few of the faults you will encounter:

Some people leave their batteries in storage for so long that they discharge to a point where they develop defects. You can’t allow batteries to discharge below a specific threshold. Some batteries will stop working altogether. You can rejuvenate others, but their lifespan will fall drastically.

In the case of a Kobalt charger, the battery can discharge to a point where the charger cannot charge it. Once the Kobalt charger detects this problem, the red light will blink to let you know that something is wrong.

The charger will blink red if the battery is too hot. Black and Decker Lithium battery chargers have a similar response. They flash red when they detect high temperatures.

You can’t afford to ignore this warning. If you don’t permit the battery to cool, you could permanently damage it.

A Kobalt charger is more likely to show a solid red light in response to high temperatures. But in some circumstances, it will blink red.

In some cases, the Kobalt charger is at fault. The charger is defective, and it is flashing red to let you know that it cannot perform its operations.

A blinking red light is a sign of trouble. It shows that the battery or charger has a fault. However, the flaw is not always serious. This Kobalt charger manual has provided some simple solutions that you can deploy to eliminate a blinking red light:

You can try troubleshooting the device yourself, but you cannot fix a dead charger. Chargers are dangerous. Don’t open it unless you know what you’re doing.

If your Kobalt battery has a solid red light, don’t rely on your past experience with other chargers. Use the Kobalt Manual.

If you suspect that the battery or charger is overheating, unplug the charger and take the battery out. Give them as much time as they need to cool. Wait until the battery reaches room temperature before attempting to charge it.

If the battery and charger are constantly overheating, take the following factors into account:

1). Pay close attention to the charger’s location. Keep it away from direct sunlight.

2). Keep the device adequately ventilated. Don’t hide it under objects that trap heat. You should also keep obstructions away from the ventilation slots.

3). Do not position the charger near appliances and devices that generate heat. That includes freezers, computers, and air conditioners. The goal is to keep the battery and charger at room temperature.

4). If the battery leaks because of extreme temperatures, get a new battery pack. You can’t take chances with leaking batteries even when the leaks are minor. If the leakage touches your skin, wash it off immediately with water and soap.

When the battery is charging, the green light will blink.

This is a good thing. It shows you that the charger is performing its role adequately. You can sit back and wait for the battery to charge to completion. When this happens, you will see a solid green light. The blinking will stop.

Manufacturers/retailers do not charge batteries fully before shipping them. Therefore, you have to charge them to the maximum capacity before using them. If a battery is fully discharged, this will take an hour.

Kobalt Charger No Light – Why?

The Kobalt charger shows no light because of a blown fuse, loose connection, and dead batteries

If the indicator lights have stopped working, you can troubleshoot the charger using the following steps:

1). Open the charger and look for a blown fuse. This is a simple matter of removing the screws. Because of the danger they pose, don’t open a charger unless you have some experience with these devices.

2). If the fuse is okay, look for signs of damage such as burn marks and loose connections.

How Can I Fix It?

Thrifty tool shed had a similar problem. He had two Kobalt chargers with dead indicator lights. He responded by using a 12V power supply to jump the chargers, and the solution worked. The Kobalt chargers started working.

But the batteries started losing their charge soon after. The technician identified overheating, overcharging, and discharging as some of the factors that may have contributed to the battery’s defective state.

If your batteries have the same problem, and you have a reason to believe that one or more cells are defective, you should get new batteries. You can’t fix dead cells.

Don’t even attempt to repair them because batteries are dangerous. If you don’t know what you’re doing, you could hurt yourself. If your batteries and chargers keep dying, you can use the following steps to enhance their lifespan:

1). Keep them away from water. You should store Kobalt chargers and batteries in a dry environment.

2). Avoid extreme temperatures. Keep chargers and batteries in locations where the environment is neither too hot nor too cold.

3). Clean the charger. Don’t allow debris to accumulate in and around the device. Remove foreign substances whenever they enter the recessed cavity. You should also remove any debris you find on the contacts. Use a clean, dry cloth.

4). If the charger is not working, unplug it. Don’t keep it plugged in when it doesn’t have a battery pack.

5). Leave all repairs in the hands of a qualified professional.