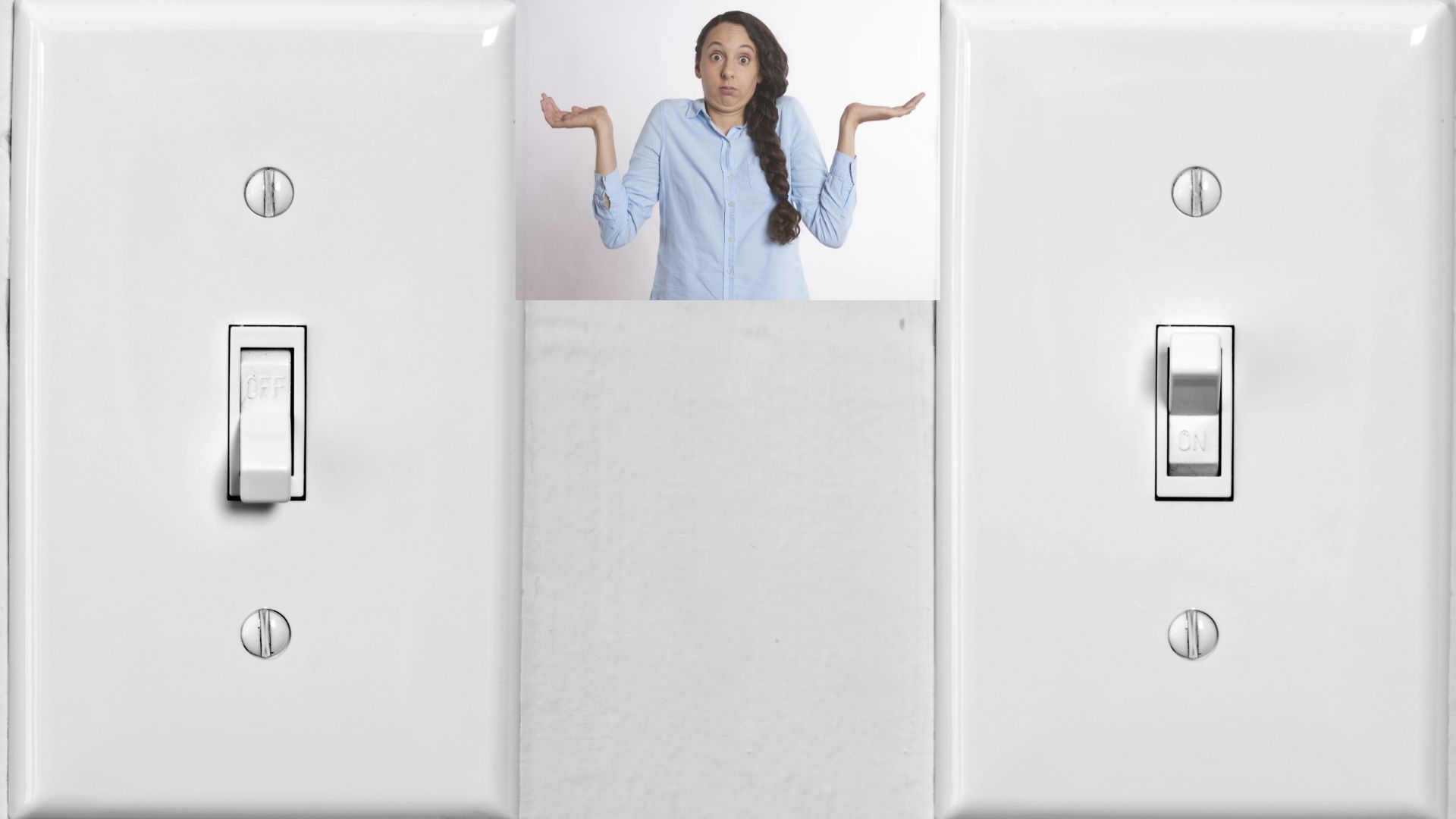 Is it normal for lights to switch themselves on and off? No, it isn’t normal. If you observe this behavior in your home, you should take immediate action. Sometimes, light switches misbehave for innocent reasons, such as a loose connection. But those innocent reasons can morph into a serious issue that can easily burn your house down.

Why Does My Light Switch Keep Turning Off/On By Itself?

The light switch keeps turning on & off by itself because of loose wiring, worn-out spring, moisture, and defective switch and bulb.

If your light switch turns on and off by itself, you’re not imagining things. People don’t expect lights to switch themselves on and off, which is why this phenomenon surprises them.

But it isn’t impossible. Light switches are more than capable of going on and off alone, without your direct involvement. That raises a question. Why does this happen? You can blame one or more of these seven factors:

You can see that light switches are complicated, or at the very least, more complex than people realize. They use a spring mechanism to open or close the circuit. But if this mechanism wears out, the contact spring will randomly open or close the switch.

The switch will turn on or off in response to external stimuli such as a slammed door.

Some people have defective switches that randomly snap to one position or the other because of a loose, weak, misaligned or broken spring mechanism. In other words, the switch did not break or wear out. Instead, it was defective from the start.

Some manufacturers use low-quality materials to make switches, which is why they are so cheap. You cannot rely on them to remain operational for more than a few days or weeks. It isn’t enough to replace the internal spring. You have to replace the entire switch because the whole device is defective.

Moisture can infiltrate the switch, causing complications like arcing that can compromise the operations of the switch. Dirt and debris can produce similar results.

Are you sure the light switch is at fault? Before you tamper with the switch, take a moment to troubleshoot the bulb. Is the bulb secure in its socket? Is it burned out? Do you need a new one?

What about the wiring in the bulb’s socket? Are the connections firm? Do you trust the wires? Have you noticed any burn marks on the insulation? Don’t be so quick to blame the switch. Sometimes, the light has a problem.

You can confirm your suspicions by recording the position of the switch each time you use it. For instance, if you flip the switch to the on position and the light comes on, record this event in your book. If the light goes off afterwards, check the switch. If the switch is still in the ‘ON’ position, the bulb and its socket are defective.

The goal of recording the switch’s position is to remind yourself. When the light goes on or off by itself, many people become confused. They can’t remember whether the switch was on or off.

5). Use Of Heavy Duty Appliances

If you checked the bulb and its socket, and they are fine, you’re still not done. You have another factor to consider before you blame the switch. Heavy-duty appliances use a lot of electricity when they start. One example is a refrigerator.

It will exceed its amp rating when it cycles on. LED lamps will turn off during those moments because of the imbalance in the circuit.

Eventually, the refrigerator’s operations will normalize, and the voltage will return to normal. The LED lamps will turn back on. Mark the moments when the lights go off.

Is anyone in the house running a washing machine, freezer, AC unit, or any other heavy-duty item?

If they are, you have found the culprit. In some homes, the lights will simply dim when you activate heavy-duty equipment. But it is not unheard of for LED lighting to switch off completely.

Loose connections are a common problem in most homes. They are typically responsible for flickering lights, crackling outlets, arcing, fires, etc. Loose connections can also cause your lights to go on and off. You have three scenarios that may occur because of loose connections:

Experts blame that last scenario on poor wiring. Similar problems can occur because of damaged or worn-out wires.

7). Use Of Four-Way Light Switch

Four and three-way switches can easily fool people who’ve never heard of them and don’t know they exist.

Is It Dangerous If Switch Turns On/Off Automatically?

Switches that turn on or off automatically are not dangerous, just irritating.

Loose connections can start fires by igniting the combustible sections of the device.

Dangerous switches are not that difficult to spot. On top of automatically switching on and off, they will present the following signs:

First of all, they will spark whenever you turn them on or off. Arcing is always dangerous in switches, especially if the sparks are loud enough to make audible noises.

Some switches won’t stop at sparking. They will generate smoke. If you investigate the switches, you will notice burn marks inside and on the cover. You may also notice a burning smell.

A hot switch should concern you. Warm switches are just as problematic. A light switch should be cool to the touch, especially if you have a standard model. Dimmers can become warm over time. But there is no reason for a standard wall switch to generate so much heat that it becomes warm to the touch.

You can’t afford to ignore any of these symptoms. Those tiny sparks you’ve noticed signify a much bigger problem.

What Should I Do If Light Switch Turns Off/ON By Themselves?

If the light switch keeps turning on and off, the spring mechanism is the most likely culprit. You can take the following steps to solve the problem:

Some other solutions to consider include:

Light switches can manifest all manner of problems. Some of them will simply turn themselves on or off. With others, you may observe the following:

Light Switch That Turns off After A Few Minutes – Why?

If you have an ordinary light, you either have a defective switch (or bulb) or a poorly wired circuit. Look for signs of arcing. If you have an LED light, your light switch turns off after a few minutes because of overheating.

Also, find out whether you have a smart bulb that turns off after a few minutes or a sensor that switches the light on or off when it detects movement.

You need a professional electrician that can re-wire the light switch, replace all the worn-out wiring, and resolve any loose connections they identify. They may choose to replace the light switch.

They can also troubleshoot a faulty LED power supply that is overheating. If you have a smart bulb with a timer, you can replace it with a regular light that won’t turn off after a few minutes.

Light Switch Flickers When Turned Off – Why?

Is it the light switch or the light? LED lights can flicker when switched off because of the return current from the power supply. In CFLs, the circuits in the bulb are charging up.

If you observe the flickering in the light switch, you can blame the arcing on loose contacts and connections and worn-out wires.

Ask an electrician to replace the damaged and worn-out wires. They can also resolve the loose connections. Replace defective light switches.

Light Stays On When Switch Is off – Why?

Your contractor wired the switch poorly. The light is connected to a hot wire in the ceiling.

This is another problem that needs an electrician. If you have electrical experience, disconnect the light and reinstall it. Check all the wiring. Make sure each wire is connected to the appropriate terminal.

Light Switch Not Working Power On – Why?

You can replace a faulty bulb by yourself. But unless you have the relevant experience, you can’t fix loose connections and damaged wires. You need an electrician to investigate your switch. They can locate and fix all the wiring errors.