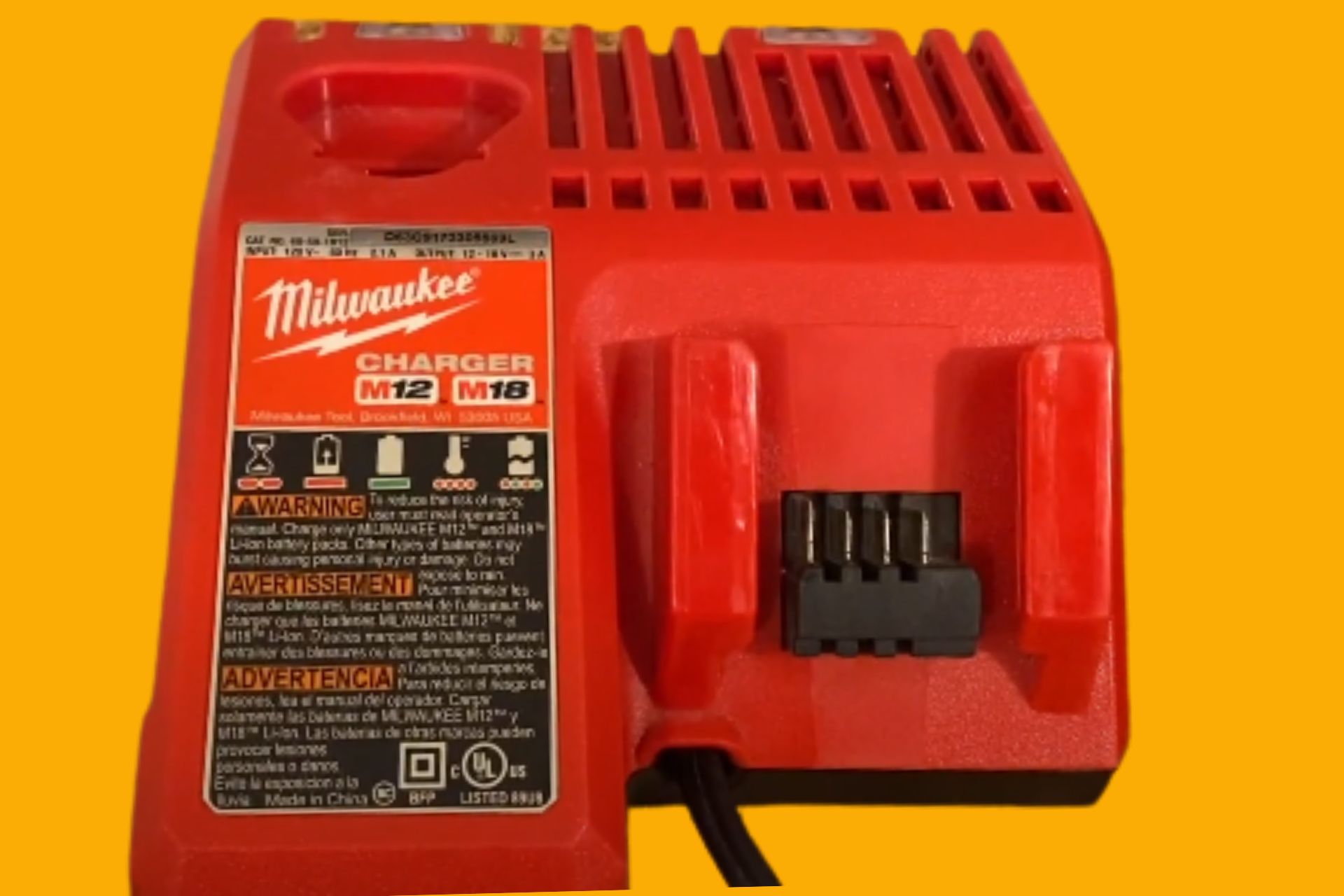 If Milwaukee is your favorite brand, you’re probably accustomed to the various flashing lights on their chargers. But if you just bought your first Milwaukee charger, the blinking LEDs may confuse and concern you. What do they mean? More importantly, should you worry?

Why Is Milwaukee Charger Blinking Lights?

Milwaukee chargers blink for a reason. Those LEDs are trying to tell you something. If you have a manual, it will tell you everything you need to know about these error codes.

People associate error codes with sophisticated electronic devices that have screens. However, the term ‘Error Code’ doesn’t necessarily refer to a series of letters and numbers.

The lights on a Milwaukee charger will flash because you inserted a faulty battery. The charger will blink because it has failed to charge the battery. Therefore, it will let you know that things have gone wrong.

This is not a bad thing. The flashing gives you an opportunity to repair or replace the battery. The last thing you want is to force a defective battery to charge.

The lights can also blink to indicate the percentage of the charge in the battery. Don’t expect every Milwaukee charger to behave the same way. Some chargers have more lights than others.

Have you checked the battery’s temperature? You don’t have to measure it with a thermostat. If it feels warmer or hotter to the touch than usual, you have a problem. The same thing applies to a cold battery.

The charger’s lights flash when the battery is too high or too low. The goal is to protect the battery. The charging process produces a certain amount of heat.

However, experts expect chargers to make batteries warm. A hot battery has a problem. You can damage a hot battery if you charge it. The charger will flash to encourage you to disconnect the battery. It may also refuse to charge the battery.

The charger’s lights may blink because you have a poor connection between the battery and charger. You can test this theory by pushing the battery firmly into the charger’s slot.

As you can see, flashing lights are not always a sign of trouble. Some lights blink to let you know that the charging process has begun. Although, when things go wrong, many laypeople won’t hesitate to blame the battery.

But you need to realize that the charger can also malfunction. Once this happens, the lights on the device may flash erratically for no reason. Try connecting the battery to a second charger.

If the second charger starts working without displaying the flashing lights, you can assume that the first charger is defective. But that is not an excuse to disassemble the device.

Use your warranty to get cheaper repairs or a replacement. If you don’t have a warranty, consult a technician. Many faulty chargers are fixable. But some laypeople ruin these devices permanently by disassembling them even when they don’t know what they are doing.

Have you taken the time to observe the flashing lights? What colors are they? Don’t assume that every LED means the same thing. You can differentiate these lights and their meanings using their unique colors. Consider the following:

Milwaukee charger blinks/flashes a red light when the battery is too hot.

It may not necessarily feel too hot to you. But if the temperature exceeds the threshold of the charger, the charger will stop the charging process. This sounds like an inconvenience, but it is good because it gives you a chance to protect the battery.

You can do lasting damage to a battery by charging it when it is too hot. Don’t expect the charger to protect the battery every single time by discontinuing the charging process.

Some defective chargers will continue to charge the battery despite the high temperatures, which is why you should pay attention to the lights.

You don’t have to fix a flashing red light. Red lights flash when the battery is too hot. Therefore, your only option is to take the battery out of the charger’s slot.

Put it aside and wait for it to cool down. Once you’re satisfied with the temperature, you can reinsert it. Admittedly, it isn’t necessary to take the battery out.

Even if you leave it in the charger, the charger won’t initiate the charging process until the battery’s temperature falls below the relevant threshold. But you can take it out if it makes you feel better.

A faulty battery will start overheating almost immediately. Replace it with a new battery. Some technicians can fix defective batteries. But in some cases, the cost is so high that you are better off getting a new battery.

A solid red light appears when the device is charging. This is good. It shouldn’t concern you. You don’t have to eliminate the continuous red light.

It will go away once the charging process ends. You should only take action when that red light starts blinking. You should also panic if you insert a battery, but the solid red light refuses to illuminate. If you’re lucky, the battery is still charging, but the LED has stopped working.

If you’re unlucky, a fault has prevented the charger from charging the battery.

You see blinking green lights during maintenance charging. This is where the battery is fully charged, but you left it in the charger.

In other words, the charger is not charging the battery. Instead, it is maintaining the charge that already exists within the battery. This mechanism is harmless.

Many people hate the idea of leaving a battery in a charger for extended periods because they think the charger will harm the battery by overcharging it. However, overcharging is not a problem. At the very least, it is not a common occurrence among Milwaukee tools.

The battery will only take the charge it requires, nothing more. This is why the light flashes green. The charger wants to let you know that it is maintaining the charge. It could have flashed red or red and green to show that something had gone wrong.

But you don’t have to worry if the device only flashes green.

A combination of red and green is dangerous, especially if the lights are flashing because you only see this when the battery pack is damaged.

Sometimes, you may also see this light when there is a poor connection between the battery and charger due to dirty contacts.

Check this video for more insights!

Milwaukee Charger No Lights – Why?

Start by checking the wall outlet. Is it working? Have you tried connecting the charger to a different wall outlet? What about the power cord? Does it have breaks, tears, or burn marks?

You can also ask a technician to troubleshoot the charger. They will either repair the faults they encounter or encourage you to replace the device.