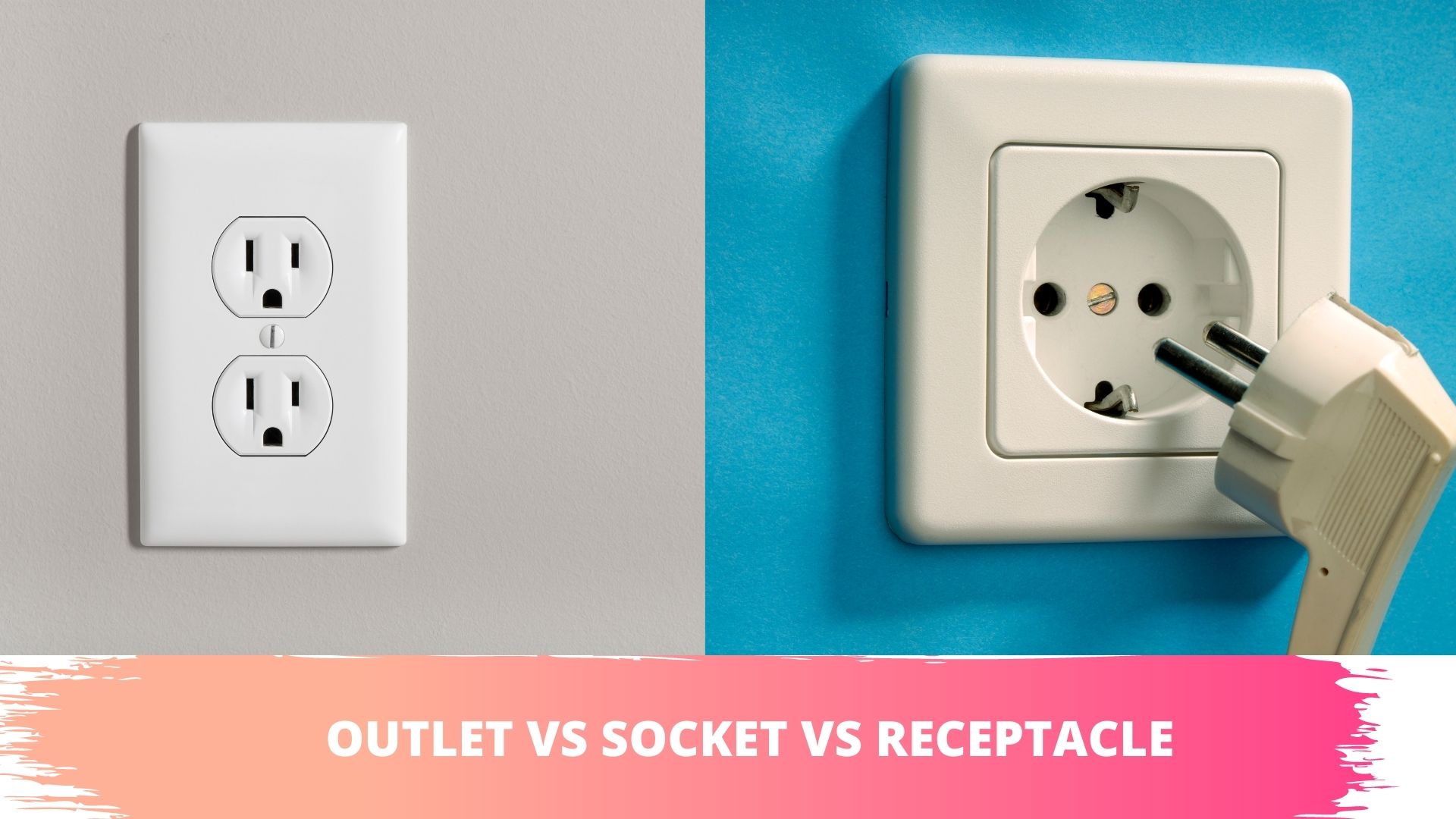 Outlets can malfunction for a variety of reasons, ranging from loose connections to cracked bodies. When the worst comes to pass, you may be tempted to hire a professional to replace your outlet. And depending on where you live, the professional in question may ask you to specify whether the problem lies with the outlet or the receptacle. What is the difference between outlet, socket and receptacle!

An outlet is a vent out of which things flow. A Socket, on the other hand, is a vent to which a plug connects. An outlet can be a socket but a socket isn’t always an outlet. For instance, the vent that a bulb enters is a socket, not an outlet. A receptacle is a set of slots into which a plug enters.

You wouldn’t be wrong in calling it a socket. An outlet, on the other hand, is the box on which the slots sit. You can have multiple receptacles on a single outlet.

Others may ask you to clarify whether you mean ‘socket’ every time you say ‘outlet’. In some locations, the outlet vs socket debate doesn’t even exist because most people use all three terms interchangeably.

But in a technical sense, outlets, receptacles, and sockets are not the same, and some electricians know the difference between them. More importantly, they may quiz you on what you mean the next time you hire one over the phone to fix an outlet.

Therefore, it is in your best interests to understand the factors that differentiate these three terms, if only to ensure that you can answer the questions that an overly critical electrician may ask over the phone. Fortunately, the guide below has all the answers.

What Is The Difference Between An Outlet And A Socket?

Once you understand those two comparisons, you won’t need anyone to tell you the difference between sockets and receptacles. Where the outlet vs socket debate is concerned, you have to keep the following in mind:

In fact, the average individual is more likely to assume that ‘receptacle’ means something entirely different. On the other hand, the public is largely convinced that ‘outlet’ and ‘socket’ are the same things. The location matters.

British people are more likely to use ‘socket’. Americans, on the other hand, tend to favor ‘outlet’.

The definition of the words may clarify the difference between ‘outlets’ and ‘sockets’.

For instance, Meriam-Webster defines ‘outlet’ as an opening or vent out of which something flows. They also refer to a stream of water flowing out of a pond.

That example is important because it paints a more accurate picture of what an outlet does, that is to say, it is a vent out of which the current flows.

Wiki Diff uses words like ‘vent’, ‘opening’, and ‘passage’ to describe them both. However, while it calls an outlet a vent from which things flow, it describes a socket as a place where a plug connects or fits.

Is the technical difference between the two the same as the difference highlighted by the English definition? Sort of. Based on their technical functions, an outlet does the same thing as a socket. They are both openings to which a plug connects.

You can also call both of them vents out of which the current flows. However, a socket does so much more. Because it is described as a vent to which a plug connects, the term ‘socket’ can also refer to the opening into which a light bulb is inserted. It doesn’t just describe the slots on a wall where the prongs of a plug enter.

Is An Outlet A Socket?

An outlet can be a socket. Some people call them plugs. A socket can also be an outlet. However, not every socket is an outlet. For instance, you cannot use the term ‘light outlet‘ to refer to the opening into which a bulb enters. It is called a light socket.

Therefore, an outlet can be a socket and a socket can be an outlet. But a socket isn’t always an outlet. In some cases, it is an input sink that receives devices like bulbs.

The NEC describes a receptacle as a ‘contact device installed at an outlet. A receptacle is used to hold the plug of an appliance. On the other hand, the NEC describes an outlet as a point (on the wing system) that provides the current you need to operate a piece of equipment.

HowToLookAtAHouse also mentions the term ‘Receptacle Outlet‘ which refers to an outlet that has multiple receptacles.

If you are like most people, the NEC’S definition confused you. However, the definition for ‘Receptacle Outlet’ probably clarified things.

At the end of the day, the outlet vs socket debate isn’t that important. That is also true for the outlet vs receptacle argument. This is because so many people use these terms interchangeably and most electricians know what you mean regardless of the word you have chosen to use.