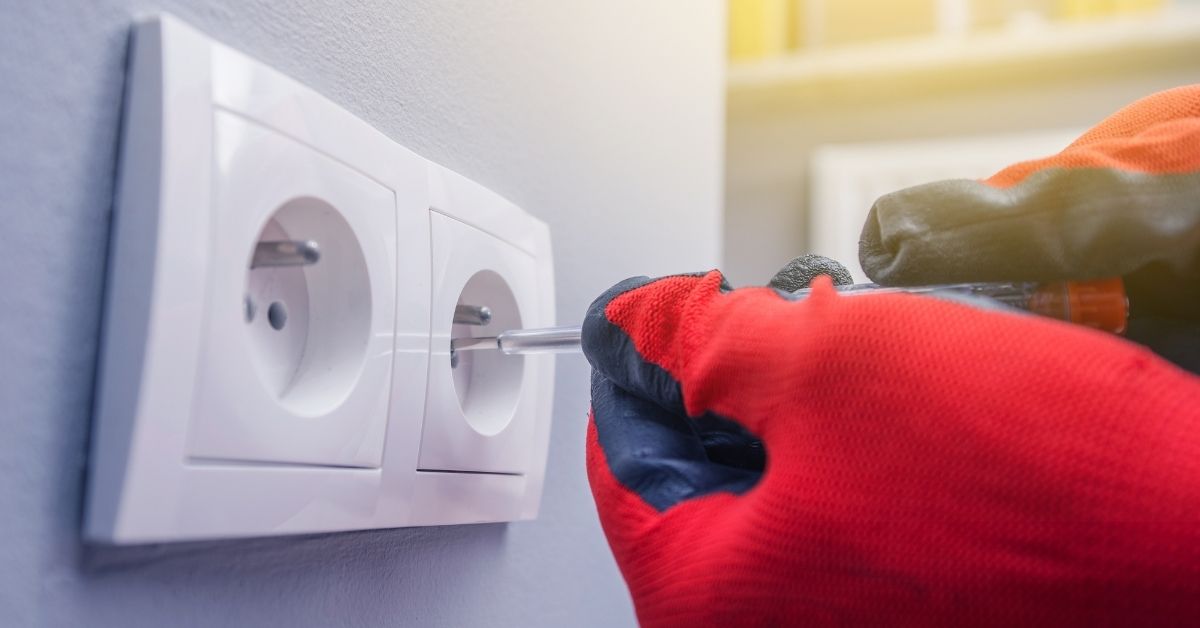 When your outlets stop working, you need to respond by checking the breaker. A tripped breaker will deprive your circuit of power. And if you check the circuit breaker panel, you will notice that the breakers are somewhere between ‘ON’ and ‘OFF’. But what if your breaker hasn’t tripped? What if all the switches are in the ‘ON’ position, and yet, your outlets don’t have power?

Electrical Outlets Not Working But Breaker Not Tripped

If the breaker hasn’t tripped but the outlets in your home have refused to work, you have to turn your attention to the wiring. If the wiring in the outlet is old or damaged, it may impede the transmission of electricity.

Wires are the pathways that electricity uses to reach the appliances and devices that are plugged into an outlet. If those wires have been compromised by burns and tears, they will either stop carrying the current altogether or they won’t carry enough to run your appliances.

Damaged wires are not that difficult to spot. Look for burn marks, torn insulation, buzzing sounds, and the like.

Loose connections can occur naturally as an outlet wears out or as a result of damage.

Don’t tamper with the outlet unless you know what you’re doing. To find loose connections, you have to disassemble the outlet. At the very least, you have to pull it a few inches from the box.

Just because the outlet isn’t working doesn’t mean it is safe to touch the live conductors. Leave this sort of thorough investigation in the hands of a professional.

Many people own GFCIs but they don’t know how the devices work. A GFCI is triggered by a ground fault. When a current strays from its intended path, the GFCI responds by interrupting the circuit, cutting the power to the outlet. The goal is to prevent the outlet from shocking the user or destroying your equipment.

An outlet with a GFCI can still shock you. But that shock isn’t fatal because it doesn’t last long. Some consumers know that a GFCI will protect them from electrocution by shutting the power to the outlet off. However, they do not realize that the power will stay off until the user switches it back on.

You have to push the ‘RESET’ button back into the receptacle to restore power. If you have a GFCI and the outlet doesn’t have power, more than likely, the GFCI tripped.

GFCIs can trip for various reasons. Once you realize that the outlet doesn’t have power because the GFCI tripped, don’t be so quick to restore the power. Take a moment to find out why the GFCI tripped. Otherwise, it may trip again, depriving your outlet of power.

Outlets do not last forever. Outlets have an expiration date, just like every other electronic component. Using an outlet causes it to wear out. The more frequent the use, the faster it will wear out.

At some point, every outlet stops working. That wear and tear will keep accumulating until the outlet dies completely.

If you live in an older home and the outlets have never been replaced, they are probably approaching the end of their life. You can slow the process down but you cannot stop it.

Outlets can burn out. If your outlet has ever felt warm or if you’ve ever seen small fires and sparks inside the receptacle, and then the outlet stopped working, it burnt out. If you open the outlet, you will observe a lot of black spots and burns.

This phenomenon has various causes, including loose wiring, overloading, surges, and short circuits.

If you installed the outlets yourself, more than likely, you did not wire them properly. Professional electricians can wire outlets poorly. But this is more likely to happen to a layperson that doesn’t understand electricity.

If you failed to secure the wires properly, or if you connected the wrong wires to the wrong terminals, you could prevent the outlet from working.

Can An Outlet Go Bad and Not Trip the Breaker?

An outlet can go bad without tripping the breaker because of short circuits, overloads, and ground fault surges.

How Do You Fix An Outlet That Is Not Working But Breaker Is Fine?

If the outlet has a GFCI, reset the GFCI. If the outlet doesn’t have power because the GFCI tripped, push the ‘RESET’ button back in. If the outlet refuses to work, hire a professional. They will tell you whether or not you need to replace the GFCI.

If the wires in the outlet are worn out or damaged, an electrician can replace them. You should do this if the jacketing has been ripped open and the wires below have become exposed.

If the wires are simply loose, an electrician can secure them as well. As was noted above, don’t tamper with the outlet unless you have the relevant skill and experience.

It will take the help of a professional to determine whether or not the outlet was properly wired.

You should replace defective outlets. That includes receptacles that have burnt out and outlets that are worn out. Some outlets will stop working for no clear reason. A factory error can prevent them from playing their role.

Regardless of the reason, if an outlet has stopped working and you have tried every other solution in vain, your only option is to replace it with a new one.

Many electricians will encourage you to replace an outlet the moment you start to smell burning plastic, especially if that outlet has GFCI technology. Don’t take chances with defective outlets. A bad outlet can burn your house down.

Multiple Outlets Are Not Working, Breaker Not Tripped – Why?

If multiple outlets in your home have stopped working and the breaker hasn’t tripped, you have two other options to consider:

Before you jump to conclusions, Check your appliances. Some people think that all their outlets have stopped working because they have plugged the same appliance into each outlet and the appliance in question has refused to work.

They never stop to consider the possibility that the appliance might be the problem.

Test your outlets again by connecting them to other devices. If those other devices are working, that first appliance is dead. The outlets are fine.

GFCI can cause multiple outlets to lose power. If you have decided to use a single GFCI to protect every outlet downstream, a trip in the GFCI will deprive all the outlets downstream of power.

This configuration is cheap but frustrating because you have no way of identifying the outlet that caused the GFCI to trip, not without investigating every single outlet.

Can One Outlet Affect Others?

This can happen if one GFCI receptacle has been connected to multiple ordinary outlets. If the GFCI trips, all the outlets will lose power, even the normal ones. You can also encounter the same problem in situations where multiple electrical outlets have been connected in a series.

How To Fix Multiple Outlets Not Working?

Though, many people are not particularly bothered by GFCIs that cause all the outlets downstream to stop working because the problem has an easy solution.

Daisy-chained outlets are another matter. You need an electrician to rewire them.