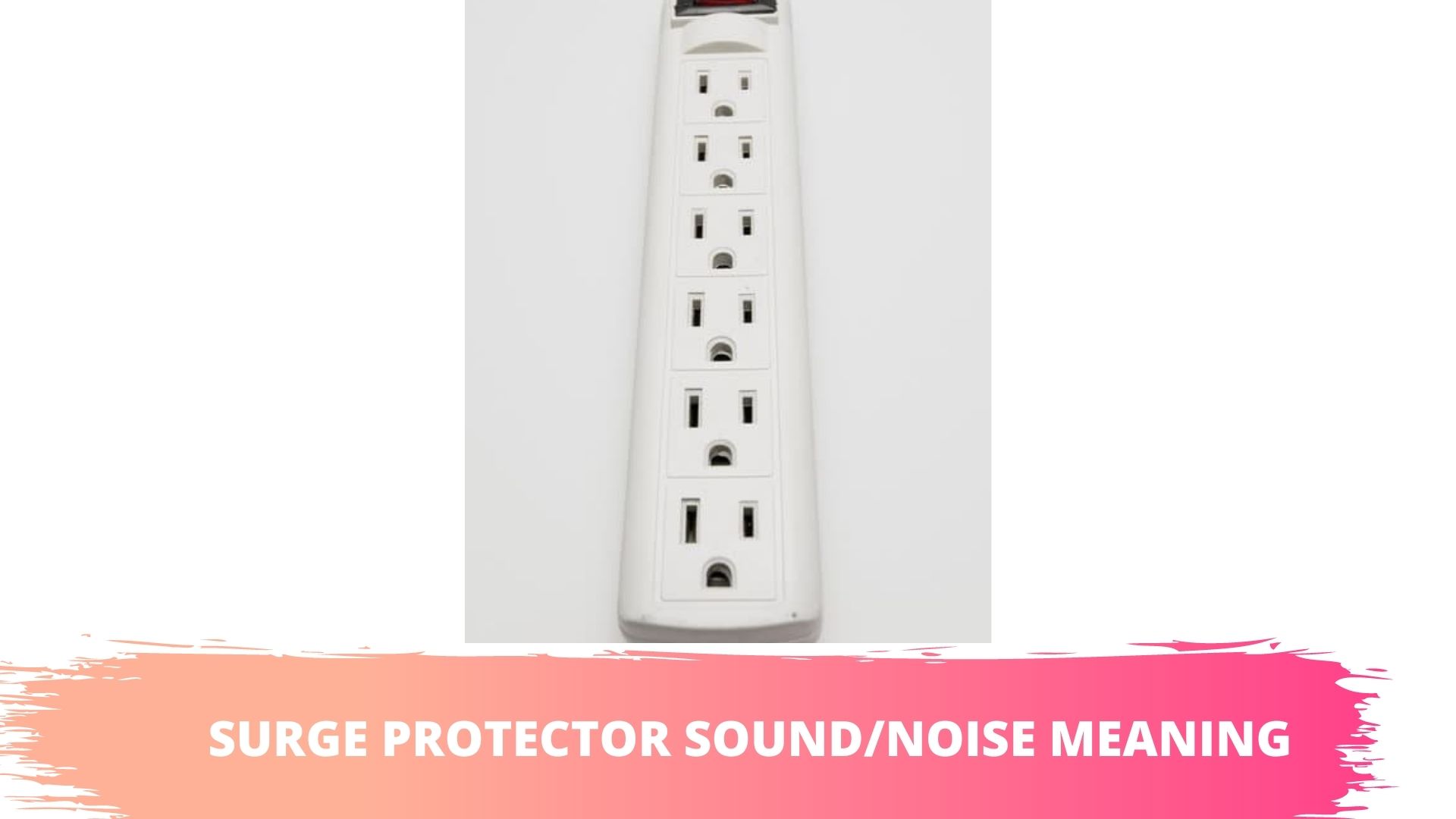 Surge protectors protect your appliance from surges. But whenever it encounters a surge, it produces sound! Have you ever heard that sound? Do Surge protectors make sound or noise?

Yes, surge protector makes noise. This is true for all electrical devices and components. However, surge protectors are not loud. Even though they are supposed to click whenever they encounter a surge, surge protectors that produce loud clicks, buzzing, crackling, and popping are most likely faulty.

It depends on two factors, namely: the noise levels and the presence of additional symptoms. As was already mentioned above, surge protectors make noise.

If that sounds alarming, Mr. Electric will put you at ease. They have emphasized the fact that electricity has a specific sound. It makes noise. You can hear it on your television whenever a burst of static interrupts the audio or in the high-voltage power lines near your home, which are continuously buzzing.

This sound is generated whenever an electrical discharge passes through the air in the vicinity of the power lines. The sound is loudest in appliances that use a high voltage. Because a surge protector transmits electricity, just like any other power strip, the fact that it makes noise shouldn’t come as a surprise.

This is perfectly normal. Surge protector sounds are only a problem when they become too loud. The reason why some people cannot agree on whether or not surge protectors make noise is that these sounds are normally quite soft.

In most cases, they will register as a light hum that most people won’t even notice. Some people are sensitive to these sounds. But others have either learned to tune them out or they simply cannot register their presence.

And even those that can hear them will tell you that they barely notice them after a while. Therefore, if your surge protector is so loud that it has become an irritating distraction, you have every reason to worry.

If the buzzing, clicking, popping, and humming are accompanied by additional signs such as sparks and the smell of burning plastic, those noises are symptoms of a bigger issue, the kind that should encourage you to replace the surge protector immediately.

Why Is My Surge Protector Making Noise?

You shouldn’t be so quick to blame all the sounds coming out of your surge protector on the movement of electricity. Surge protector sounds have a variety of sources, including:

Surge protectors are designed to protect your gadgets and appliances from surges by absorbing and redirecting the excess current they encounter.

When a surge protector encounters a surge, it generates an audible click.

This can happen whenever you active a power-hungry appliance like a blender. It causes a spike in the voltage, triggering a response from the surge protector.

If you have a UPS or a surge protector with batteries, the device will generate a sound to alert you that the batteries are either old or depleted. You are supposed to respond to this alarm by replacing the batteries.

Perform a thorough investigation to ensure that the sounds you hear are coming from the surge protector.

According to Scherer Electric, electrical sounds can emanate from various appliances. That includes the appliances you have attached to the surge protector.

If you have a panel in the vicinity, it may confuse you with the buzzing sounds it generates, especially if those buzzing sounds are very loud. You should also consider the wires in the walls. If they are frayed, they can produce a similar buzzing sound.

The easiest solution is to shut the power to those circuits off. If the noise stops, you can assume that the surge protector isn’t at fault.

When something goes wrong inside the surge protector, such as a capacitor or MOV exploding, you will hear an audible sound such as a pop or sizzling.

Surge protectors wear out. If you spend enough time using them, they will develop faults. Wires may fray or loosen. Internal components may deteriorate. Once this happens, the surge protector sounds will become much louder and more frequent.

Some surge protectors are simply defective. They produce sounds that cannot be explained because a mistake occurred during the assembly process. If your surge protector has a defect of this sort, even if it hasn’t manifested any signs of trouble, you should replace it because the noise could evolve into a serious problem down the line.

High-pitched sounds are normally attributed to an Uninterruptible Power Supply or a surge protector with a battery backup feature. You hear the high-pitched noise or beeping in situations where the battery is old or depleted.

Some smart surge protectors have high-pitched sounds that they generate to alert the user about a particular event such as the occurrence of a power surge or the presence of an internal component that has stopped working. If you have a sophisticated surge protector with diagnostic lights and sounds, check the manual to find out what they mean.

A surge protector is supposed to protect appliances and gadgets from surges and spikes. When it redirects an electrical surge, the surge protector will produce a click. Some clicks are loud enough for everyone to hear. Others are much quieter.

An ordinary surge protector cannot make beeping noises. If your surge protector is beeping, it either includes a diagnostic function that beeps when a particular event occurs or it doubles as a UPS, in which case it will beep to alert you that your appliance or gadget is using the surge protector’s backup power.

If the surge protector also provides backup power, you should respond to the beeping by shutting the connected devices down. Backup power of this sort is not designed to keep your devices running. It is supposed to keep them operational long enough for you to shut them down safely. If the beeping is a diagnostic sound, check the manual to find out what it means.

Most electronic components are expected to produce a dull humming sound. But the humming shouldn’t be so loud that you can hear it from several feet away. In such cases, depending on the model, you have to consider the possibility that the surge protector has electronic parts on the inside that are loosely mounted.

If the humming is coming from a whole-house surge protector, Mister Sparky thinks that the circuit might be in an overloaded state. You need a professional to resolve issues of this magnitude. Additional factors for you to consider include poorly grounded wall outlets and surges that are passing through a surge protector that has stopped working.

People tend to associate crackling noises and static sounds with loose, frayed, and damaged wires. Arcing sounds can cause electrical fires if you ignore them.

If you trust the wiring, Ask-The Electrician blames crackling and static sounds on deteriorating components within the surge protector or the wall socket.

If the surge protector is overheating, the resulting electrical failure can produce similar sounds, especially in cases where the circuit components and wiring are burnt.

It is quite common for AC inductor components like transformers and relays to buzz in response to the electricity passing through them. Though, in some cases, the appliances plugged into the surge protector are the ones buzzing. You can test this assumption by unplugging the appliances in question and waiting to see if the buzzing stops.

How To Stop Surge Protector From Making These Sounds and Noises?

If your surge protector is making noise, I will encourage you to simply replace it. As you now realize, some noises are innocent. For instance, that clicking sound you hear from time to time isn’t a cause for concern.

It tells you that your surge protector is working. You don’t have to do anything to get rid of it. However, clicking sounds are fairly obvious and you don’t have to worry about mistaking them for anything else.

Popping, buzzing, humming, and crackling noises, on the other hand, could mean anything. Yes, many electrical components hum because of the current running through them. However, surges, spikes, and overloads can also cause humming.

Crackling noises are just as problematic. Sometimes, a surge protector crackles because of the spark that is occasionally generated when you plug a powerful appliance into one of its outlets. But crackling is also symptomatic of loose or frayed wires.

This is why many professionals encourage consumers to replace noisy surge protectors. Because electricity is so dangerous, you cannot take chances by relying on a potentially defective surge protector.

If you even suspect that your surge protector has stopped working, just get a new one. And when it comes to buying new surge protectors, prioritize high-quality models with a safety rating, a decent gauge, and a high ampacity that is less likely to overload.

If you hate the idea of abandoning a potentially healthy surge protector, consult a professional. They will take the device apart to identify the source of the noise. However, if they locate a problem such as a burnt electrical component, don’t be tempted to fix the surge protector.

Once you repair a broken surge protector, you cannot trust it to protect your appliances and gadgets, especially if the failure it suffered was catastrophic. Do not take chances on faulty surge protectors. Unless the issue is minor, such as a loose wire, just throw it away and get another one.

Surge protectors generate sounds. It means they either have loose wires or damaged internal components. If the surge protector is perfectly healthy, the noise is probably coming from another electrical item in the vicinity such as a panel, wires in the walls, or even the appliances attached to the surge protector.

If you have any doubts about the safety and integrity of a noisy surge protector, you should just replace it with a better model, one with a safety rating along with the relevant gauge and ampacity.