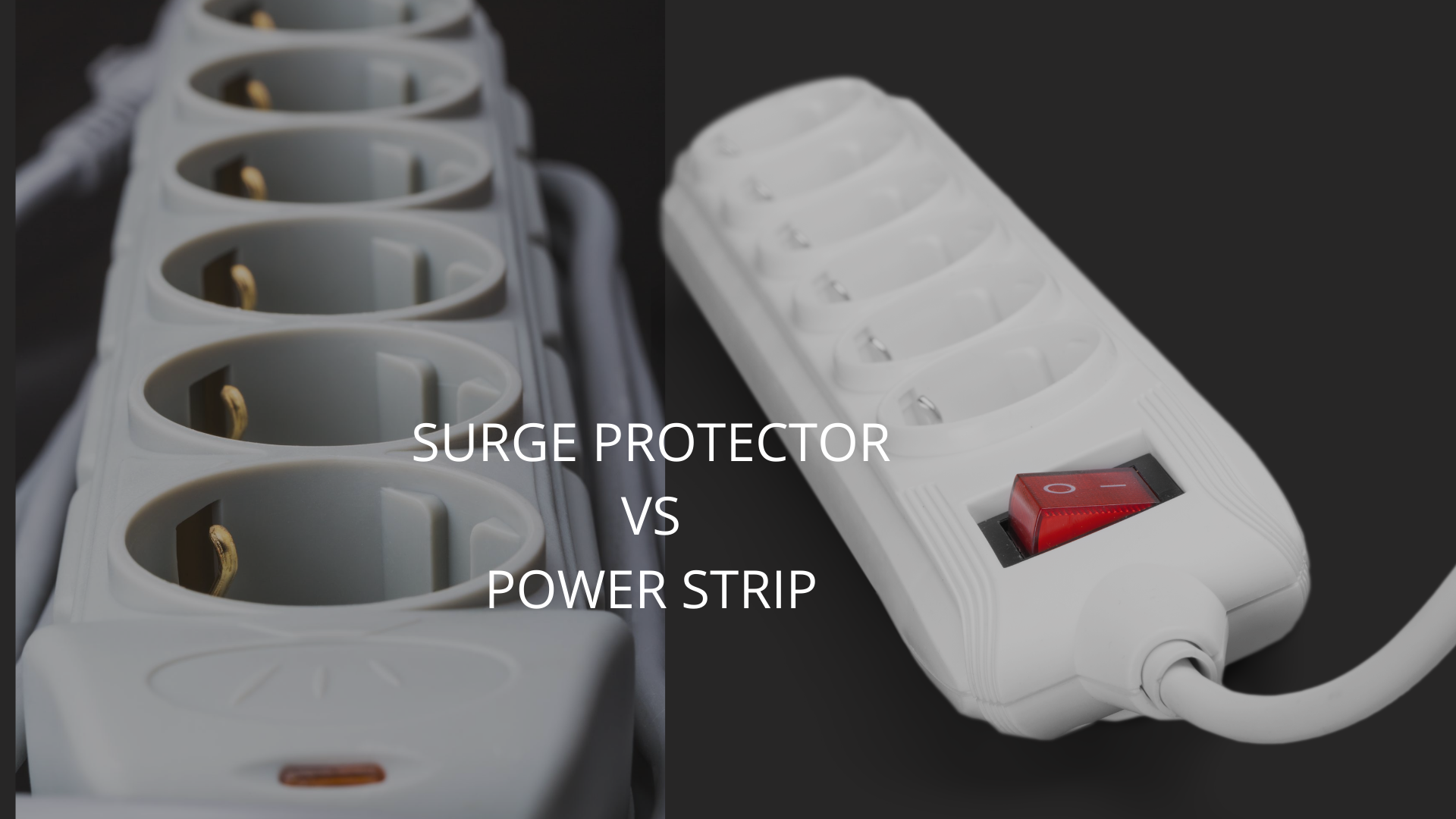 Surge Protector vs. Power Strip: All You Need to Know

If you intend to buy extra sockets, you will most probably come across two types of products – Surge Protectors and Power Strips. They usually look the same but their features and operations differ a lot from each other.

What’s the difference between a Surge Protector and Power Strip? A Surge Protector is an electrical device that is designed to prevent the extra flow of current from reaching into sockets while Powerstrip is a simple power channel that has several socket options.

It might be difficult to differentiate between the two products because they look the same. Many times you might have heard that Surge Protectors are better but that might not always be true. However, fret not because we will be telling you the advantages of both Surge Protectors and Power Strips.

With the complete information about these two products, you will have a better idea of which product to use for what purpose. This article covers its meaning, functions, features, and differences. Moreover, we will also be sharing some safety tips for using the two.

Get to Know the Basics

Before diving into the detail, let’s brush up on a few basics related to Surge Protectors and Power Strips.

First things first, a surge protector or power strip is used to plug in additional sockets and support various appliances at once. However, we all know that electrical power surges occur, from time to time, which are very harmful to your electric powered appliances.

An electrical surge is a sudden spike in the electrical current flow. Extra current flows through the wires for just a second or two. These two seconds can cause a lot of damage to your electrical appliances. Moreover, if the surge is extreme, sockets can catch fire.

There are few reasons why surges occur. These surges can be limited to just your house or depending upon the intensity, your apartment building might get affected too.

The reasons for electrical surges are mentioned below:

Having poor quality wiring that has insufficient capacity to bear heavy current flow is more prone to face electrical surges.

Heavy-Duty Devices Continuously Turning On or Off

Heavy-duty electrical devices like heaters, air-conditioners, refrigerators, or PCs can also be the reason for electrical power surges if they are in a continuous state of turning on and off.

This happens rarely but does happen. Lightning strikes during heavy rainfalls or thunderstorms can cause voltage surges and burn out the wiring of your computers, TVs, ACs, etc.

After reading the reasons we just stated, we are sure that you don’t want to be affected by these issues. To keep your appliances and devices safe from surges and spikes, owning protective equipment is necessary. For this protection, Surge Protectors are usually the cheapest and best option.

That being said, the issue is, you may confuse a surge protector as a power strip. Let’s first get to know about the two products and how they function. Right after that, we will explain what sets them apart.

What Is a Surge Protector and How Does It Work?

A Surge Protector is not only for home use. There are also heavy-duty variants available that are suitable for commercial usage. Devices installed in control and industrial systems, communication channels, and distribution panels are called ‘Transient Voltage Surge Suppressors’. The same TVSS devices are scaled down to make them suitable for office or residential use.

What Is a Power Strip and How Does It Work?

Another type of electrical socket provider is a Power Strip. It is a simple power channel that has several socket options. You might have heard the term ‘Extension Source’ a lot, that is basically another name for a Power Strip.

Other names for this device include extension board, power bar, trailing board, or multi-socket source. The sockets are attached to a box made of an insulator which is connected to a flexible wire. Power Strips with circuit breakers provide protection against power spikes and keep your electrical devices away from getting destroyed.

A Surge Protector has an additional layer of circuits which bear electrical power surges and prevent them from directly affecting the plugged-in devices. Power Strips with such circuitry are the only ones which will provide protection to your appliances.

You now know what Power Strips and Surge Protectors are. You are surely wondering whether all Power Strips are made for protection purposes like surge protectors are or are they simply additional socket sources.

Well, it is inevitable that at home or in your office, you might need to plug in various devices at the same time and you run out of sockets. This is where a Power Strip is the most suitable option.

However, are you worried if the Power Strip will protect your valuable laptops and PC? Will it be able to handle a sudden spike of electric current?

The answer is 50/50 because there is one important feature that aids in protection otherwise you might be risking all your expensive devices.

What Makes a Surge Protector and a Power Strip Different From Each Other?

Surge Protector vs. Power Strip, this is the real deal – distinguishing between the two and deciding on which one is better.

Although Power Strips are cheap, convenient, and always offered with a multi-socket option, we recommend Surge Protectors over them. Surge Protectors are cheap too, but they provide massive protection against power surges and spikes.

Power Strips with circuit breakers are an alternative option but the safety level is much lower than that of a Surge Protector.

What Is the Advantage of a Surge Protector Over a Power Strip?

In this section, we further solidify the answer to your question, that is, what is the advantage of a Surge Protector over a Power Strip? Here are some substantial advantages of Surge Protectors.

A Surge Protector Is More than Just a Power Strip

A Power Strip provides additional sockets for plugging in various devices at a single time. On the other hand, a Surge Protector not only provides multi-socket support like a strip, but also prevents hazardous bursts, spikes, and surges of high voltage.

Surge Protectors save a lot of your money by keeping your expensive tools and appliances safe. It protects the hardware, wiring, and overall health of the devices by maintaining an optimum current level.

Surge Protectors come in various types. The level of protection, absorption capacity, and a number of extra sockets differentiate variants.

Another amazing feature available in Surge Protectors is the master and control system. In such protectors, one port acts as a master and the rest of them are dependent upon it.

Last but not the least, an amazing advantage of Surge Protectors is that some of them offer a safety cover and rotating plugs. For example, if some sockets are not being used, you can close the shutter and prevent children from accidentally poking their fingers into it.

Moreover, the rotating plugs offer great support for big plugs with more than 2 or 3 pins. Just by swiveling and arranging the plugs, you can set the protector for the required socket design.

Tips for Buying/Using a Surge Protector

If you have decided now that a Surge Protector is a right product for you, here are some useful tips to keep in mind when purchasing and using it.

Tips for Buying a Power Strip

If you have decided that a Power Strip will fulfill your need, we have gathered a few tips for you as well.

From time to time, you may experience various electrical spikes for a number of reasons. Some are light enough to not cause any damage while others may cause severe damage to your devices and appliances. It’s essential to buy products that abide by OSHA guidelines.

Even if you are using Surge Protectors or Power Strips to prevent the damage, there are a few very important safety tips that must be followed. They are as follows:

Someday while gaming on your PC, you might look at the multi-sockets plug and think – will it protect your PC from power surges or not?

To save yourself from big losses, buying a Surge Protector is very important. However, don’t get “shocked” by buying the wrong device. Pun Intended! After reading our detailed Surge Protector vs. Power Strip comparison, we are sure that you are equipped with the complete answer to your question: what is the advantage of Surge Protector over a Power Strip?

Moreover, if you want extra safety and protection, you may consider an Uninterruptible Power Supply (UPS). UPSs are great for protection against extreme electrical spikes and also provide the option for plugging in various devices at once. Hope this information helps you in making the right purchase and keeping your devices safe!