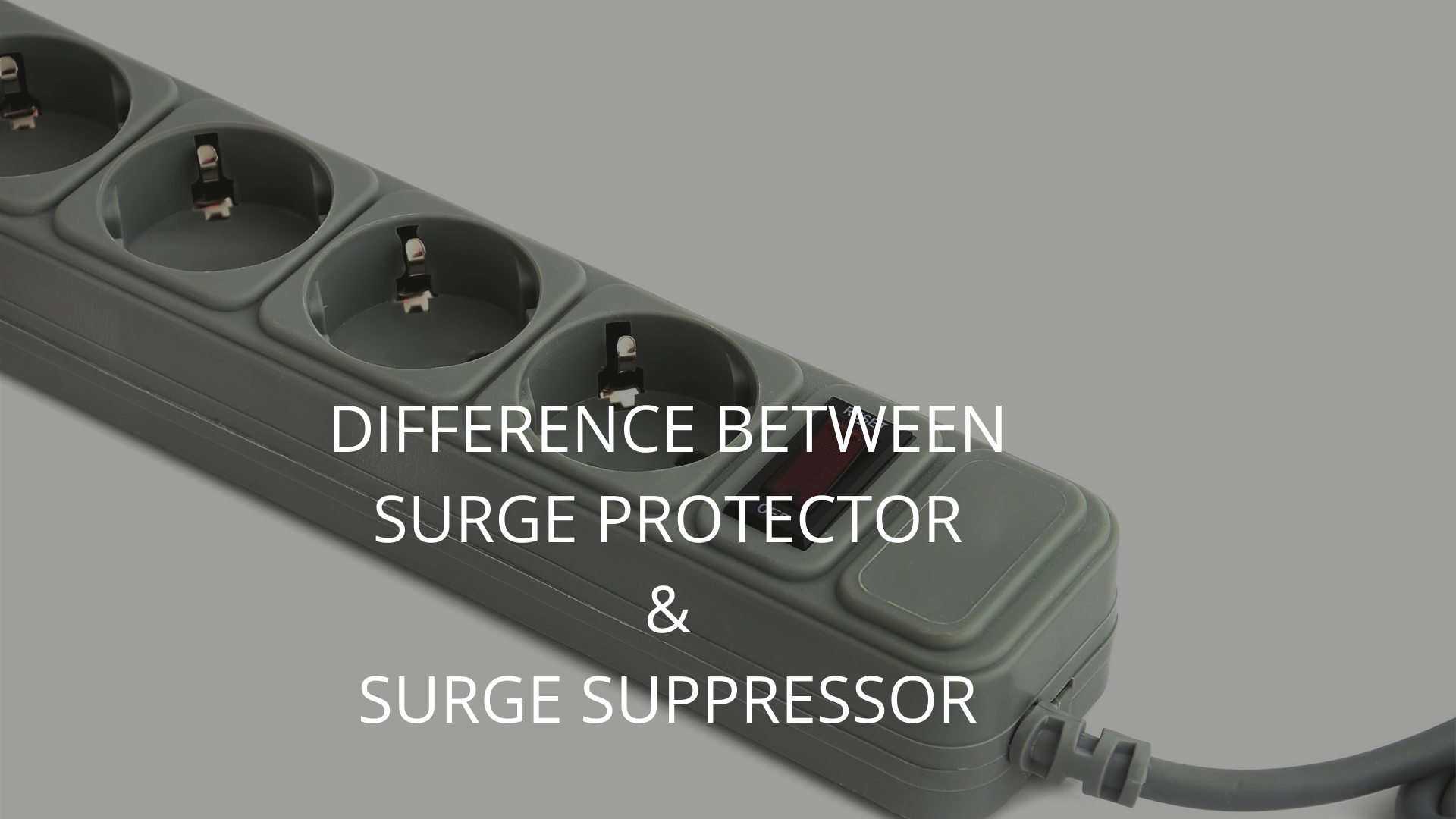 The terms ‘Surge Protector’ and ‘Surge Suppressor’ are somewhat identical, but they are two different things. In a nutshell, these terms may be used to describe devices that limit excess voltage. However, there are many variations between the two with respect to the technologies and required protection levels.

You may be keen to learn about the purposes or functions both the devices perform. But before I move on to discuss the two types, their functions, and differences between the two, I will first clarify what a “surge” actually is, the different sources of the surge, and potential damages caused by a surge.

Getting to the meaning of a ‘surge’

A Surge refers to an interim rise in voltage or current in an electrical circuit. It has the ratings as follows: voltage (>2000 volt) and current (>100 amperes). On average, the rise time for a surge ranges from 1-10 microseconds.

A surge or transient is one of the most frequently occurring power issues. Its sources can be any one of the following:

While these may be the sources that can cause a surge in devices and electrical appliances, there are also many damages that take place when the surge occurs.

Potential damages caused by a surge

As mentioned before, a surge may be short-term in nature, but it can bring many damages/losses in the long-term. These damages are listed as follows:

Before we move on to discuss the differences and what makes one device distinguished from the other, I will first explain what each type of device really means and its basic purpose.

What are surge protectors?

A surge protector is a device or an appliance that is designed to avoid voltage spikes in electrical devices. It can cause currents to flow if provided with a voltage above its rated voltage.

What are surge suppressors?

A suppressor, on the other hand, has an enhanced feature of regulating the voltage and making power constant if a splurge occurs.

What are the differences between the two?

When there is a spike or splurge in voltage, and it goes beyond a certain level, the surge protector avoids that splurge. It does so by detecting it and cutting the power flow on a temporary basis while still working.

The alternative way of it working is that it would cut the power flow for a permanent term and also die on its own. In short, the protector simply turns the unit off in case of surge occurrence. It also tends to divert the extra voltage/current from the surge or the transient into the wire that is grounded in.

On the contrary, if a splurge takes place with a surge suppressor, the suppressor brings the voltage to a regular level and avoids shooting up to a certain point.

Surge suppressors are mostly used in these two types of electronics:

It is mostly used with equipment such as computers and telecommunication devices.

A surge protector is best used with a PC. Your computer has components that are sensitive to voltage. In case of a surge, these components can be damaged very easily hence causing destruction of your important data. This damage may tend to reduce the life of your computer, erase all of your data, or may even do major harm, such as causing PC shutdown.

Computers are dear items, and the data you save in terms of multiple folders and files is very valuable. As such, it is wise to invest in a high-quality surge protector once to save from a lifetime of trouble.

Surge protectors may also be used with entertainment centre components. In this case, the surge protector increases the life of these devices. Surge protectors are necessary here as a power surge on a large-scale can cause immense damage.

Something basic as a light bulb does not need a surge protector as the maximum that would happen to a light bulb, in case of a power surge, is that it would burn out.

Telephone lines and power lines run an equal chance of being affected by lightning strikes. There may be differences between the two, but once both are affected by the strike, it is more or less in the same manner.

Telephone wiring and power lines run the same distances as well as through similar environments; therefore, they experience the same dangers in the environment. Often the placement of telephone wires is lower than the power lines; this placement is not regarded by lightning. Lightning can affect any wire on the pole, be it higher or lower. As such, a surge suppressor can be used for both.

BASIS FOR SELECTING BOTH TYPES OF DEVICES:

A surge protector is selected on the basis of the following criterion:

-Safety rating: A UL or ETL rating is preferred. This shows that the protector has been tested and qualifies the specific safety standards.

-Warning system: A surge protector should warn beforehand once it’s weakening so that it can be immediately replaced. A protector not providing power to your system indicates it has stopped working.

-Sufficient outlets: Look for a surge protector that has multifaceted outlets. There are also protector models that have pivoted outlets and cater best to your devices.

-Connection with USB: It must be ensured whether the USB connection is 1 or 2 amperes. A 2 amp USB connection has an added benefit of charging something larger than a cellphone.

-Size: A large surge protector may be suitable for you only if it’s to be used at home or at the workplace. If you’re someone who tends to travel a lot, then a portable, handy size surge protector would work better for you.

-Warranty: It is a good and smart move to ensure that your device has a warranty in the event of it being run down and not working.

-Purpose: Before selecting a surge protector, identify the purpose for which it is being used. A home/office-based surge protector would be different from the one which is approved for medical purposes.

On the contrary, a surge suppressor is selected on the basis of device type. Device types have the following classification:

-DC Suppressors: Provide protection from transient voltage and are used for DC and data circuits. They are mainly used for PCs and in telecommunications.

-Single-phase suppressors: They are employed with single-phase AC power.

-Plugin style suppressors: These suppressors are typically plugged in the switchboards in order to provide protection from voltage transients.

-Lightning arrestors: As the name suggests, they provide protection from surges that occur from lightning.

TYPES FOR BOTH DEVICES:

I hope with this article I have cleared the blurring differences between Surge Protectors and Surge Suppressors. Hopefully, these differences make it easy for you to distinguish between the two next time you intend on making a purchasing decision for either of the two devices. Good luck with your purchase!