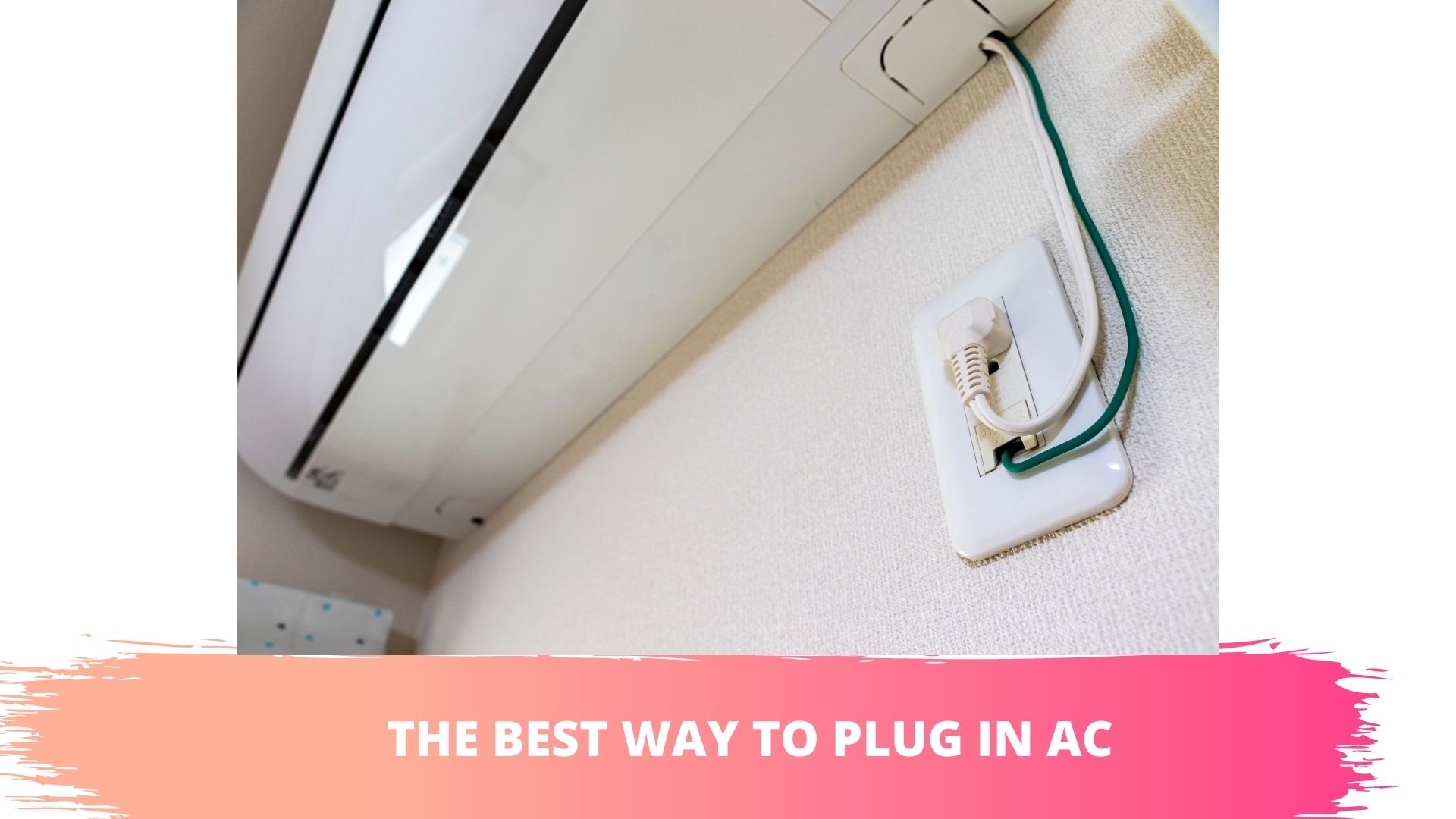 Air conditioners are a common sight in most homes. However, some homeowners are reluctant to install them because they use so much power. This tends to attract questions about the best way to power an AC. You have to plug most appliances into some sort of outlet to use them. This is obviously true for air conditioners.

What is less obvious is whether or not you can use a regular outlet. Even more perplexing are questions about the use of extension cords and surge protectors. Some people have homes with outlets that are simply too far away for their Air Conditioner’s power cord to reach.

Can You Plug An Air Conditioner Into A Regular Outlet?

Your selection of an AC will depend on the need. For instance, window air conditioners are perfect for consumers that want to cool a single room. You can operate a 120V window AC by plugging it into a regular outlet. A dedicated circuit isn’t required. Though, the safer option is to use one.

Most appliances can get by with the 120V circuits found in most homes. That includes stoves and dryers. It also includes some air conditioners, especially the portable models.

If you have a window air conditioner, it probably came with a 110/120V rating. However, according to SFGATE, some of the larger AC units require 220/240V circuits. You typically find such ratings in Central Air Conditioners that can use as much as 5,000 watts of electricity.

Thus, you need to use a dedicated circuit for larger 240V central air conditioning units. And also note that 240/250 V outlets have a different configuration from regular 120 V outlets.

240/250V outlets have a different slot configuration from ordinary 120V outlets. Therefore, if you have a larger 240/250V air conditioner that draws a lot of power, it requires a special outlet.

If you have a hard time making sense of the information that comes with your AC and you cannot determine whether the unit requires a regular outlet or a special outlet, just look at the air conditioner’s plug. It will show you the slot configuration you need.

Priority Rental has a series of diagrams that reveal the types of outlets you will find and their associated ratings. If you compare the configuration of your AC’s plug to the outlets in the diagrams, you can identify the type of outlet your AC requires.

Can You Plug An Air Conditioner Into A Surge Protector?

AC units are also susceptible to surges. Power fluctuations, both big and small, can destroy an air conditioner’s circuitry. This is why many homeowners have chosen to plug their air conditioners into surge protectors.

According to Mendel Plumbing, AC units can produce surges. They cause an increase in voltage when they start. That spike can ruin smaller appliances like hair dryers. But this is less of an issue where efficient AC units with large price tags are concerned.

Is It Okay To Plug An AC Into A Surge Protector?

Many electricians discourage the use of ordinary surge protectors, the kind that looks like power strips. They believe that consumers are better off using HVAC surge protectors.

These are devices that an electrician will install at the AC condenser. Once in place, they will respond to surges by sending the excess current to the ground.

If you want a more comprehensive solution, whole-house surge protectors are the superior option. They protect every single appliance in your home from power surges.

However, before you buy an HVAC surge protector or even a whole house surge protector, you should inspect your air conditioner to ensure that it needs one, in the first place.

Some air conditioners have surge protection mechanisms in their plugs. Whenever they detect a surge from the wall outlet, they respond by tripping. This prevents the excess current from reaching the AC unit.

Naturally, you shouldn’t assume that your AC unit has a surge protector in the power plug. Check the manual. If you still have questions, consult a professional. They will investigate your unit to determine whether or not it requires an additional surge protector.

If you think you need a surge protector, you have to take one important factor into account. Surge protectors are designed to respond to voltage spikes. Once they detect a surge, they will trip.

This is a problem because, as was noted above, air conditioners draw larger quantities of power than normal when they first start. A surge protector may interpret that initial spike in voltage as a surge. If this happens, the surge protector will trip the same way it does when it detects a normal surge.

But this isn’t an issue in the long run. At the end of the day, a surge protector is not a threat to the operations of your Air Conditioner. If anything, the surge protector will keep the AC unit running by keeping it safe from power fluctuations that would normally destroy its sensitive components.

Can You Plug An Air Conditioner Into An Extension Cord?

Extension cords are a bad idea because even if you have a simple window AC that doesn’t draw as much power as its larger counterparts, it can still cause the extension cord to overheat.

You are more likely to start a fire by using an extension cord than you would be if you plugged the AC directly into a wall outlet. It isn’t just a question of using the right gauge.

Extension cords are meant for temporary use. People are supposed to use them to solve short-term problems. And yet, many homeowners use the devices in place of permanent wiring. They do not realize that some heavy-duty cords can overheat if they are used extensively in hot weather.

This is why professional electricians want consumers to avoid extension cords.

It is safer to use a wall outlet.

Is It Safe To Plug An AC Into An Extension Cord?

Using an extension cord can start fires whilst also ruining your air conditioner because of the voltage drop. In that regard, you can probably understand why so many electricians are convinced that extension cords are not safe.

1). If you want to know why many electricians discourage the use of extension cords, just look at the power cord that came with your AC. An AC’s power cord is thick and short.

In other words, it is strong enough to safely transmit large volumes of current. The length speaks to the resistance. The longer the conductor, the more resistance the current encounters, the greater the voltage drop and heat generated.

2). The size of an air conditioner’s power cord shows you that the appliance uses a lot of power. However, most of the extension cords on the market have thin wires. They are also long. This increases their resistance.

3). Even if the heat generated isn’t strong enough to start a fire, the voltage drop caused by the resistance could damage the air conditioner’s motors. This is because the AC cannot get the power it needs to maintain the torque it requires to perform its role.

What Kind Of Extension Cord Can I Use For AC?

The best extension cord for AC is a 14 gauge cord. It handles the power generated by AC preventing overheat and fire. Additionally, the capacity of the extension cord must match the power of the AC unit.

If extension cords are only dangerous when you choose the wrong one, you have to ensure that you select the right extension cord for your air conditioner. That is the only way to eliminate the risks associated with their use. You can do this by taking the following factors into account:

The gauge tells you the thickness of the extension cord. You have to remember that ordinary air conditioners have thick power cords. Try to emulate them by getting an extension cord with a suitable gauge.

The thicker the cord, the more current it can handle. Mental floss expects consumers to aim for 12 or 14. A 14-gauge cord is more than adequate. But you should look for 12 gauge wire to be on the safe side.

2). Extension Cord With The Power Of The AC Unit

Take a moment to determine the rating of your air conditioner. You have to match the capacity of the extension cord to the power of the AC unit.

If you still have your air conditioner’s manual, read it. It will show you the volume of current the appliance draws. If you don’t have a manual, look at the AC itself. It will reveal the amount of electricity it uses in watts.

According to Home Air Advisor, dividing the watts by volts will give you the amperage. Match the capacity of the extension cord to that amperage.

If you can get a 12-gauge extension cord of the right amperage, you can attach the AC to its outlets without causing any accidents.

Can You Plug An AC Into A Power Strip?

You can plug an ac into a power strip especially if you have a newer model. Newer AC units do not use as much power as their older counterparts. They are less likely to overwhelm the power strip.

Is It Safe To Plug An Air Conditioner Into A Power Strip?

If the power strip is rated for the volume of current the AC uses, you can safely use it to operate the air conditioner. However, most of the power strips on the market are far too weak.

An ordinary power strip would eventually overheat and overload, starting a fire in the process. If you want to use a power strip without suffering the consequences, it isn’t enough to select the right gauge.

The people at Patch expect consumers to prioritize power strips that have circuit breakers that can respond to overloading. They also encourage consumers to use short power strips with cords that do not exceed six feet. This will minimize resistance.

Additionally, the power strips should be temporary. Prolonged use increases the risks involved.

Amongst All, Which One Is The Best?

The Best Way To Plug In An Air Conditioner

If the wall outlet is far away but it is still within a 10-foot radius, replace a short AC power cord with a longer one. Any competent electrician can do this.

At the end of the day, if you can find a way to plug the AC into a wall outlet, you should do so, especially if it means putting it on a dedicated circuit.

But if you can get 12 or 14-gauge extension cords, power strips, or surge protectors with an amperage that matches the AC, they will transmit electricity to the appliance without overloading or overheating.