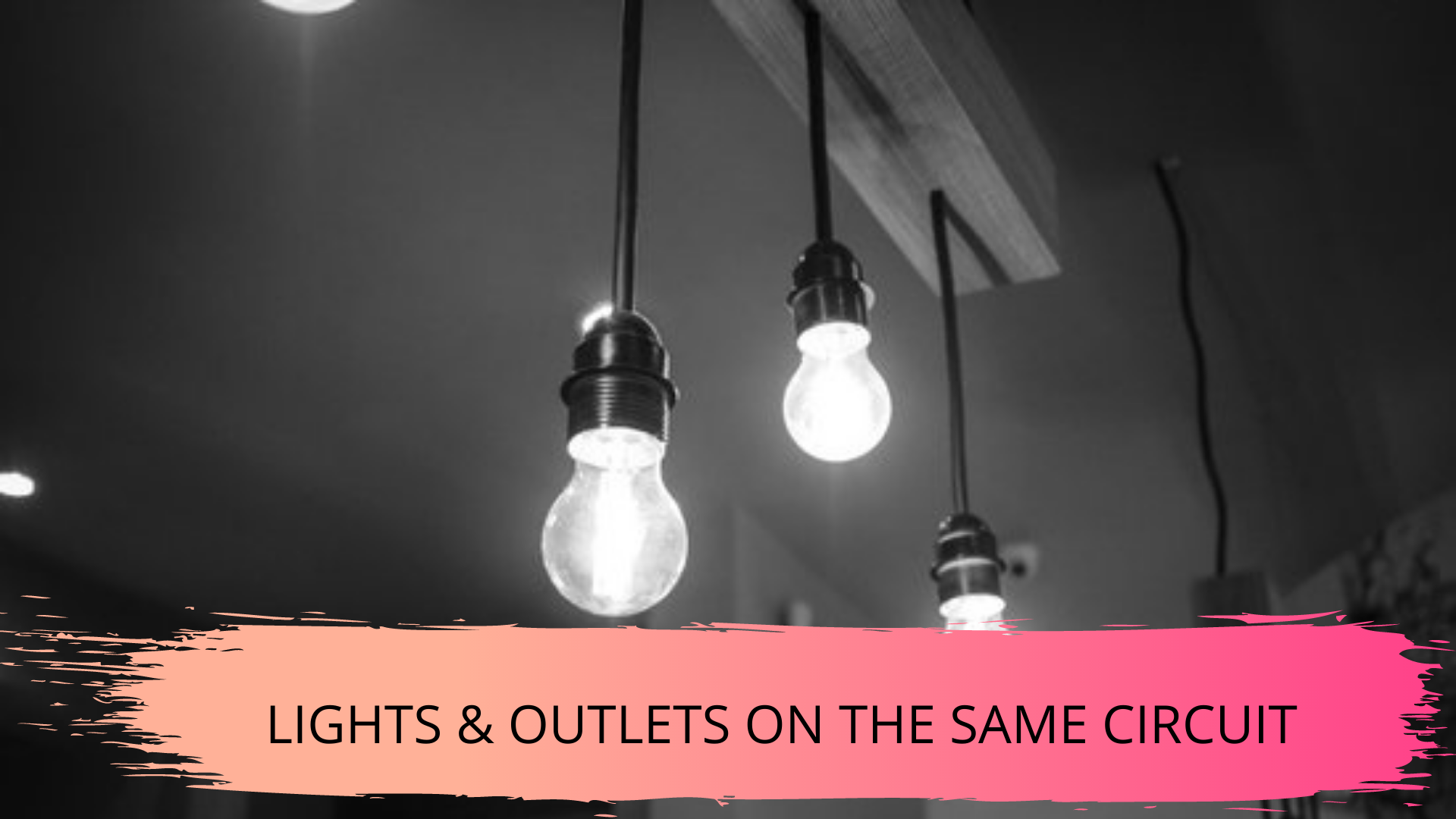 The concept of wiring lights and outlets on the same circuit seems convenient. But is it possible? That isn’t the only question you should ask, though it is the primary issue that concerns homeowners. You must also determine whether it is even legal. Just because you can wire your lights to the same circuit as an outlet doesn’t mean the regulations will permit you to do so.

You will learn why the idea is supported and opposed by homeowners and electricians in equal measure.

Can I Wire Lights and Outlets on the Same Circuit?

Yes, you can. The average home uses an indoor distribution board that houses the breakers of the majority of circuits in the home. A circuit controlled by a 15A circuit breaker (which a lot of contractors use for general lighting) can also accommodate outlets.

There are three primary factors to keep in mind where lights and outlets are concerned:

If an appliance that you plugged into the outlet overloads the circuit and blows a fuse, it will not only disable the outlet but the lights as well. Both the lights and the outlets are on the same circuit breaker. As such, it shouldn’t surprise you to learn that they will suffer the same fate.

By blowing a fuse, you may also plunge your home into darkness. This is the principal reason that discourages homeowners from using the same circuit for the lights and outlets.

It costs less money to install a separate lighting circuit. This is because lights use very little electricity. For that reason, they require very thin wires.

This practice was common in the early years of the 20th Century where most homes were populated by simple appliances with a much lower load such as desk lamps and fans. The appliances present in the modern home have a much higher chance of overloading the circuit and blowing a fuse.

Wiring a Light Switch to an Outlet

This isn’t a simple undertaking. The people at ask.the.electrician.com believe that the project requires intermediate to advanced skill and experience. They expect homeowners to hire a licensed contractor to make the installation.

This is the only way to ensure your safety. If you have some experience with electrical installations and wiring, the process will involve the following:

1). Start by installing an electrical box. Like everything else, the location of the box will depend on the regulations in your area. Hunker thinks that it is a good idea to place it 44 inches from the floor. This will make your home compliant with the ‘Americans with Disabilities’ Act. You should also place the box near the door.

2). You need two cables, one that goes to the light fixture and another that can run to the outlet. Do not proceed until you have turned the circuit breaker off. This will make the task less dangerous. Get a tester and check the leads.

3). Once you are certain that the leads in the outlet are dead, connect the cable from the electrical box to their load terminals (The black wire goes to the brass terminal, the ground wire to the green ground terminal, and the white wire to the chrome terminal).

5). You can wrap things up by twisting and capping the white wires. Don’t forget to run the ground wires to the relevant (ground) terminal.

If you still have questions, the Sparky Channel has an explanation that provides more details. The gentleman giving the explanation has extensive experience in the field. For that reason, you can trust his approach.

Again, it is worth remembering that a mishap with the receptacle could affect the lights once you place them on the same circuit. Even if you don’t blow a fuse, a powerful appliance that draws a lot of power could cause your lights to dim once you plug it into the outlet.

Admittedly, some electricians are convinced that this fear is unfounded. They believe that such trips rarely happen because of the way most homes are wired today. And even if a trip happens, it will most likely affect the lights in just one area of your home.

In other words, you should have enough sources of light in the vicinity to find your way to the circuit breaker. These proponents of the practice of using a single circuit for lights and receptacles also argue that the concept allows homeowners to cut down on the AFCI units they need because regulations in many areas expect outlets in bedrooms to be on AFCI.

If you are determined to mix lights and receptacles on a single circuit, you should start by talking to the local authorities. Yes, it is your house. But at the end of the day, you must wire it according to the local codes and regulations.

You may find that the regulations demand the use of separate circuits for the lights and receptacles. However, if you are not limited by the local laws, you are free to mix circuits. It is a convenient option.

That being said, you must also realize that a malfunction at an outlet will affect your lights. Depending on your wiring, you could kill all your lights because an appliance at an outlet tripped a breaker.

If you decide to shut the power to the outlets off for any reason, for instance, to perform repairs, you will also switch the lights off. This can become a problem if you are performing repairs at night. For that reason, you are better off using separate circuits.