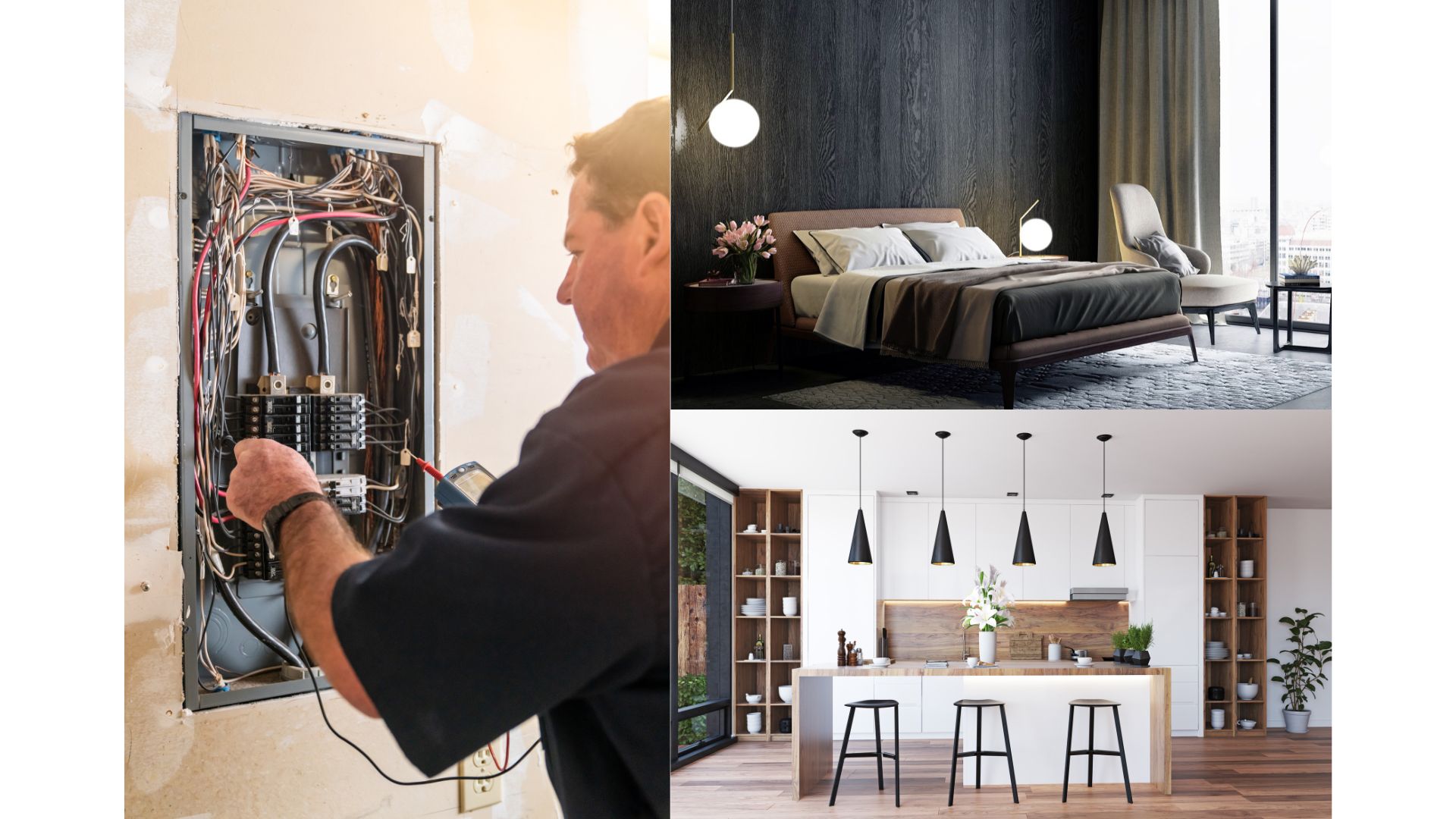 AFCIs observe the electrical waveform. They respond to wave patterns that signify arcing by interrupting the circuit. Don’t expect AFCIs to react to every arcing incident.

AFCI manufacturers know that arcing is normal, and it frequently occurs in electrical devices and wiring. For instance, arcing occurs when you push a plug into an outlet or when you pull it out. AFCIs are smart enough to ignore such arcing events. They only react to unsafe arcing.

The NEC wanted homeowners to add AFCIs to dining rooms, libraries, sunrooms, closets, family rooms, and the like. Everything changed in 2014. The NEC expanded its AFCI regulations to include kitchens and laundry areas.

This was not always the case. You could wire a kitchen in 2008 without including AFCI technology because the NEC’s AFCI regulations did not encompass the kitchen.

How Many AFCIs Per Kitchen?

Are you expected to add AFCIs to every receptacle? You can take that route, but it isn’t necessary. First of all, you can use a dual-function AFCI/GFCI receptacle because it combines AFCIs and GFCIs. Secondly, it is enough to install the AFCI on the first outlet in the circuit. The device will offer AFCI protection to every outlet connected to the load side.

You can confirm that your outlet of choice is the first receptacle by removing it and capping the wires. If the outlet is truly the first in the branch circuit, all the other outlets downstream will stop working.

Does These Kitchen Appliance Need AFCI?

Most homeowners don’t mind adding AFCI technology to their homes. However, they don’t know whether every appliance in the house requires an AFCI. This guide will provide clarification:

Refrigerators are somewhat complicated. On the one hand, contractors recommend AFCIs for refrigerators because they have relays that generate arcing while switching the start capacitor. On the other hand, refrigerators in kitchens are one of the few appliances whose receptacles are exempted from AFCI protection.

But what about fridges in other locations, such as the basement, attic, or even in your bedroom? Those don’t count. If the NEC expects you to apply AFCI protection to a particular room (besides the kitchen), you must install an AFCI for every refrigerator in that room.

Many homeowners avoid GFCIs because they cause nuisance tripping, and a tripped GFCI allows the food in your refrigerator to rot. They apply that rationale to AFCIs. However, AFCIs do not have a reputation for nuisance tripping, at least not where fridges are concerned.

Consult your local code before you proceed. Even if it provides the same exemption as the NEC, make sure that exemption encompasses separate freezers.

A garbage disposal in the kitchen requires AFCI protection. Many people question the necessity of a GFCI. They argue that the NEC’s regulations on this particular issue are vague. However, the same cannot be said for AFCIs. Your wiring project won’t pass inspection unless you add AFCI protection to the garbage disposal.

Many homeowners have argued against using AFCI protection in this situation because they have never encountered any cases where a garbage disposal electrocuted a consumer or started a fire.

Dishwashers fall under the same category as garbage disposals. The NEC has regulations demanding the use of AFCI protection for dishwashers.

Homeowners are not as bothered about this requirement because dishwashers operate in close proximity to water, and consumers understand the critical role an AFCI can play in this situation. Because the NEC expects homeowners to use GFCIs on dishwashers, it has become common practice for people to use receptacles that combine AFCIs and GFCIs.

A furnace requires an AFCI. The NEC wants to see AFCI protection on every 120V 15A and 20A branch circuit (Single Phase) that supplies outlets and devices in a home. Therefore, unless your furnace is 220V (which doesn’t necessarily guarantee an exemption), you must apply AFCI protection to the furnace. Using a hard-wired furnace doesn’t change anything.

You can run certain appliances without using GFCIs if you hardwire them instead of plugging the devices into a wall outlet. But building codes don’t limit their AFCI requirements to plug-in equipment.

In some locations, every receptacle or switch on a 15A or 20A circuit requires AFCI protection. Ranges and stoves in such areas would require AFCIs. In other places, the code restricts AFCI protection to specific sites and appliances.

For now, you should assume that your range requires AFCI protection. Consult the local code for clarification. Depending on the distance between its receptacle and the kitchen sink, the range may also need a GFCI. In that case, you can use a GFCI/AFCI receptacle.

The NEC tends to emphasize the use of AFCI technology on 120V 15 and 20A branch circuits. Therefore, you can ignore AFCI protection here because dryers typically require 240V. Although 120V dryers exist. Again, you should consult your local code just in case it mentions dryers in relation to AFCIs.

The laundry room is among the areas the NEC mentions when it lists locations in a dwelling unit that require AFCI protection.

Is AFCI Required in Bedrooms?

You need AFCI protection in the bedroom. This requirement appeared in the NEC in 1999 because the bedroom places items such as lamps and chargers close to curtains, bedsheets, and other flammable materials.

In other words, your house may catch fire while you sleep because arcing in a charger plug ignited the curtains.

The NEC wants to see AFCI protection on the switches and outlets a 120V, 15, or 20A branch circuit accommodates. These regulations encompass lighting circuits. These days, most rooms in a dwelling space require AFCI protection. Check the local code for confirmation.

Is AFCI Required In Bathrooms?

You don’t have to install AFCI technology in bathrooms because the NEC doesn’t require it. But the NEC cannot impose its rules on local authorities. Find out what your local code has to say. If it also ignores bathrooms, you can eliminate the AFCI protection in your bathroom, especially if it keeps tripping for no reason.

Is AFCI Required In The Garage?

The garage is another area the NEC has neglected where AFCI protections are concerned. You should only add AFCIs to the garage if you think they are necessary. Otherwise, the law won’t compel you to install AFCI technology in the garage.

Where Are AFCIS Not Required?

AFCI technology is more prominent these days because the NEC recognizes the significant role it plays in household fires. Arc faults have too many sources, including damaged wires, shorted wires, overheating, faulty appliances, broken receptacles, and more.

And it only takes one spark to start a fire while you sleep. This is why the NEC is always expanding AFCI requirements to include new locations and devices.

Today, most rooms in a dwelling unit require AFCI protection. The NEC wants to see this technology on all outlets, switches, and devices on a 120V, 15A, or 20A branch circuit. With that in mind, some people think the entire house needs AFCI protection.

But the NEC has provided plenty of exemptions, including unfinished basements, detached garages, lights and outlets outside the house, crawl spaces, and attics.

You don’t need AFCIs on extension wiring less than six feet long. But this exemption only applies if you don’t add outlets or devices.

AFCIs respond to arcing. Arcing is dangerous because it can start a fire. This is the biggest difference between GFCIs and AFCIs.

GFCIs respond to ground faults by cutting the power to protect the consumer from electrocution. AFCIs matter because the heat from an arc fault can easily exceed 10,000 degrees F. That is more than enough to ignite flammable items like magazines and curtains.

According to Electro Federation Canada, electrical faults caused roughly 1,500 fires over a period of five years in Ontario. Some of those fires started because of arcing. Arc faults have numerous sources, including: