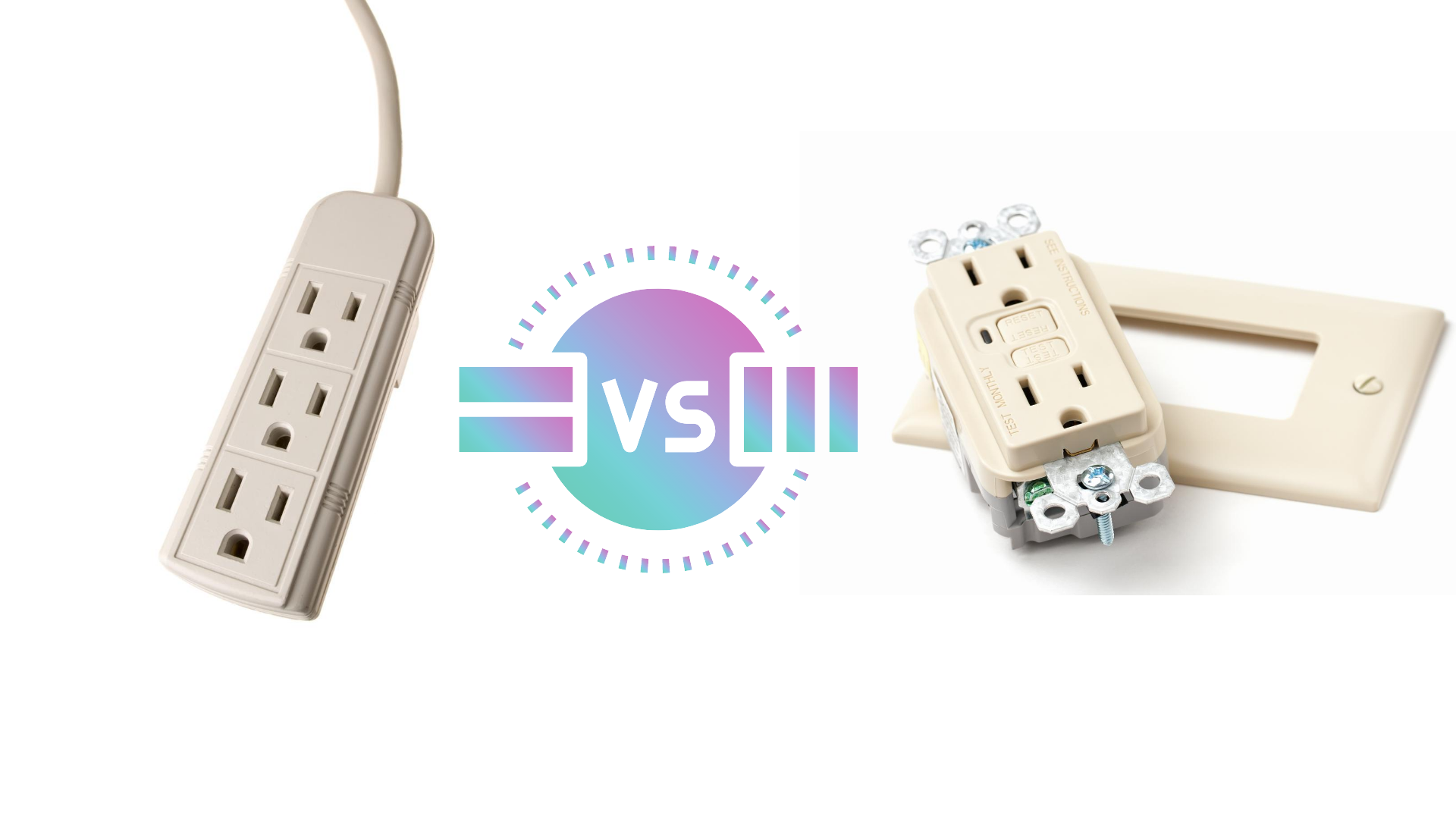 Surge Protector vs GFCI – A voltage spike lasting long enough can cause severe damages to the entire building or area. To avoid such happenings, we often hear terms such as grounding, surge protectors, and Ground-Fault Circuit Interrupters (GFCI).

Long-term surges due to sudden power may or may not be handled by overvoltage relays or fuses. Surges not only can be dangerous for a person’s life but can also reduce the lifespan of household devices.

In this article, we have included some important information about surge protectors and GFCI. They both are used to avoid damage from power. They work differently and offer different benefits.

What is the difference between a surge protector and GFCI?

What is a Surge Protector?

A surge protector is designed to help you avoid damages that sudden power surges can cause keeping your electrical equipment safe in the event of a power surge. There is always a chance that an extensive power surge will cause critical damage and here surge protectors come handy.

How Does a Surge Protector Work?

Now you will be thinking how surge protectors work. It is very simple, they regulate the voltage and current within your electrical appliances either through grounding or blocking making a safe level for your household equipment. Generally, they extend the life of electrical devices.

Reasons Why Surge Protectors Should Be Used

As we already mentioned, this is the most important function of surge protectors. The name itself defines the use. They not only protect your electrical appliances and your facility during the event of a power surge but come handy during a lightning storm as well.

Sometimes, we face an issue of high levels of electricity and it can cause the failure of your power system. If your house does not have proper electricity flow, then during this instance there is a high probability that fuses will blow out. Surge protectors control the flow of power, helping your circuits function more consistently.

If you run a business, then you know how important electrical appliances are and if you do not have a surge protector, then all of these expensive devices are at risk. Telephone systems, computer systems, alarms, monitors, and other manufacturing equipment can be damaged by a power surge. Therefore, make a smart decision and protect all of them using surge protectors.

An electricity shortage can be very frustrating and nothing is worse than having an event ruined due to an electrical issue. You can keep your audience focused on the event by using surge protectors as they ensure that electricity is running as it should to all equipment you are using for your event.

Installation of surge protectors keeps your home safe and offers several benefits including:

Different systems of your house are at great risk if you have not installed surge protectors. As a result, you can face more maintenance expenses. You may restrict the number of service calls you make per year by installing a surge protector.

Since power surges can decrease the lifetime of the electrical devices and equipment, a house surge protector can limit the harm caused to those products – minimizing how much and how often you upgrade or replace them.

The best thing about surge protectors is that they are not hard on the pocket. You only have to pay a few hundred dollars. Other than that, they can be installed the same day you have bought them – ensuring you can start securing your home.

What is a GFCI?

Whenever there is a break in the low-resistance grounding path from an electrical system or tool, a ground fault occurs. In such situations, the electrical current travels through an alternative route to the ground resulting in severe injuries or sometimes death.

In order to avoid these mishaps, Ground-Fault Circuit Interrupters (GFCI) are used. They are fast-acting, prompt circuit breakers. In the event of a ground fault, they shut off electrical powers securing not only your electrical appliances but offers protection to you as well.

How Does a GFCI Work?

Now you will be thinking how a GFCI works, the principle is pretty simple. It compares the total current going to and returning from circuit conductors along with the equipment. If it encounters a difference of approximately 5 mA between the amount of going and returning current, The GFCI interrupts the current.

Usage of GFCI keeps you and your home safe and offers several benefits including:

The flow of electricity is monitored by sensors within the GFCI outlet. Even if a negligible amount of current that passes through it in an unexpected course, it will be diverted to the ground by most three-prong outlets.

Nevertheless, if the current during a ground fault is transmitted by a human being, it may have dangerous consequences.

GFCI outlets completely shut off electrical power as soon as they sense current inconsistency. It protects us from having unpleasant shocks from power spikes, defective equipment, or contact with water.

When the electrical current induces a power surge in the exposed or loose wiring, it will start a fire within the walls of your house.

A GFCI outlet prevents the leakage of current in its path until it has the chance to spark an electrical fire. These outlets are a big benefit for fire safety and prevention whether you live in an older home that may be susceptible to electrical oddities.

Is GFCI A Surge Protector?

Identically they are different.

A surge protector protects against surges such as a power outage or a lightning strike, whereas a GFCI protects from ground faults like an electrical short.

In such, surge protector comes with built-in GFCI.

Do I Need A Surge Protector If I Have A GFCI Outlet?

Yes, you need both devices. Having a GFCI doesn’t compensate for the absence of a surge protector because these devices perform different roles. A GFCI will react to a ground fault. It won’t do anything if a lightning strike sends thousands of volts through the circuit.

You will lose all your electronic equipment, including the GFCI. On the other hand, you can’t trust a surge protector to defend against ground faults. It has no way of knowing that a current is running through a different medium, such as the human body because it doesn’t track ingoing and outgoing current.

Buying a GFCI alone leaves you vulnerable to surges. Prioritizing the surge protector puts you at risk of deadly shocks originating from a ground fault. Get both devices to be on the safe side.

In the end, we will say that both Surge Protector and GFCI are reliable companions in the long term and protect you from severe damages that can happen due to power surge.