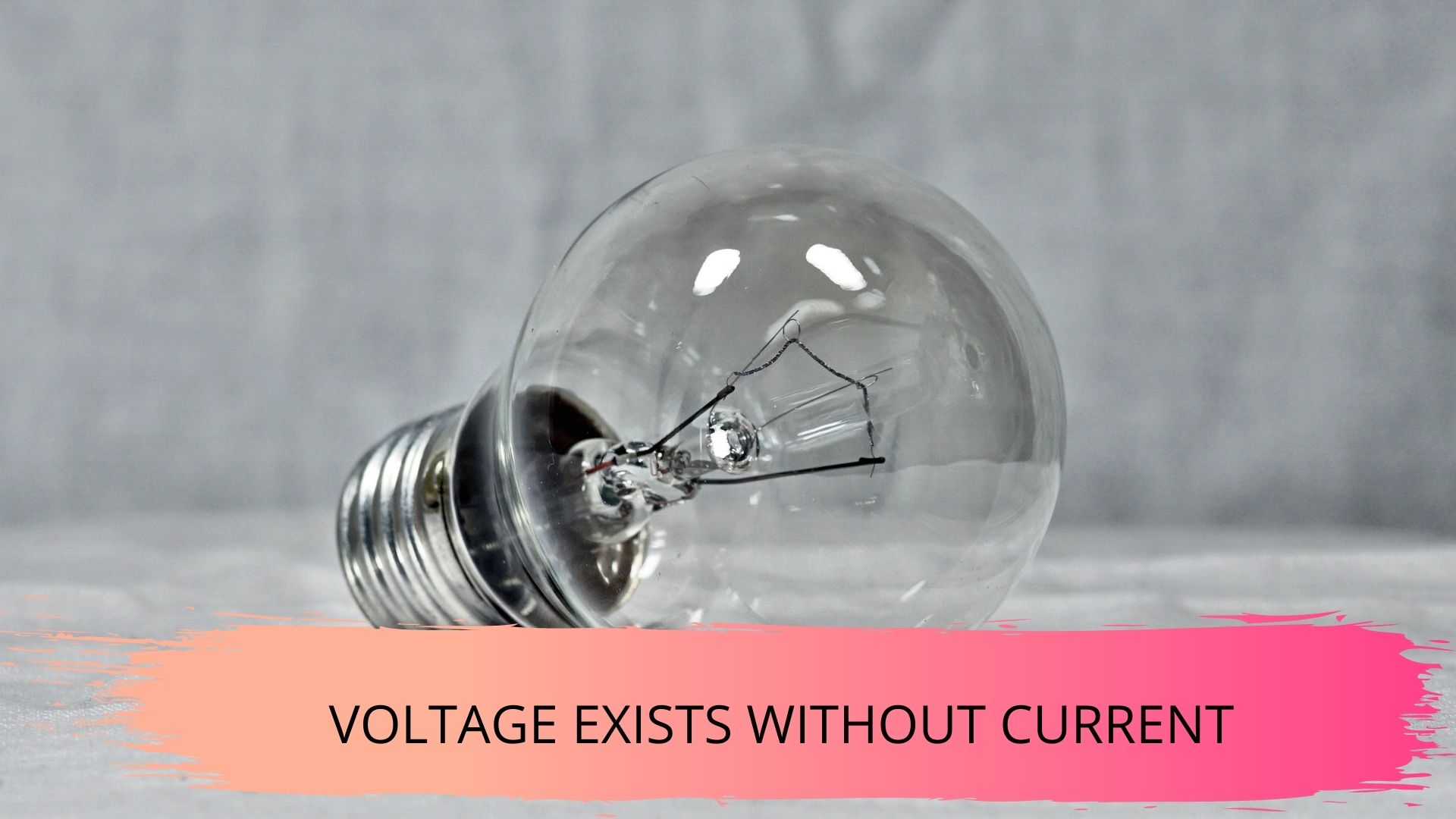 Can voltage exist without current? Yes, it can. The current is dependent on voltage. Voltage, on the other hand, does not depend on the current. The voltage is the difference between points. It is the force that allows electrons to move from one point to another.

If the voltage is absent, those electrons cannot move between points in a circuit, which means that the current does not exist. However, the voltage is still present because you have a circuit with points whose electrical potential varies.

Just look at a pack of batteries. A current cannot flow unless those batteries are introduced to a circuit. And yet, before you add those batteries to a circuit, a difference in electrical potential exists between the terminals. Therefore, you still have voltage.

That doesn’t include situations that involve superconductors which are a special case.

Though, superconductors are rarely involved in everyday situations, which is why people tend to ignore them during debates of this sort. Some people do not understand how voltage can exist when there is no current, or why current cannot exist in the absence of voltage.But the picture becomes clear once you understand what current and voltage are, not to mention the nature of their relationship.

Energy Education describes voltage as the ‘Potential Difference‘. A lot of people use this term because it reveals the way voltage works. Most people know voltage as the measurement of the energy that moves a charge from one point to another.

You can think of it as the force that pushes electrons. According to The Engineering Mindset, Free electrons do not require voltage to move. Even in its absence, they are in motion, moving between atoms. However, their movements are random.

This random movement of free electrons is useless. You cannot use it to power your lamp. If you want to use those electrons, you must get them to move in the same direction. This is where the voltage enters the picture.

People always refer to the voltage at a point, that is to say, it is measured in reference to a point of zero volts. It is the equivalent of measuring the height of a landscape in geography by comparing it to sea level.

The difference in electrical potential between two points will give you an idea of the amount of energy required to move a charge between those two points. Rather than water in a pipe, imagine a waterfall.

If you have two basins filled with water and they are at the same level, the water will not flow between them. But if you elevate one basin above the other, gravity will force the water in the elevated basin to flow into the lower basin.

This happens with waterfalls. Water flows in streams down from an elevated point because of the difference in height. The same thing happens in a circuit. According to EE Power, because the electrical potential between the terminals in a circuit is different, electrons can flow from the lower voltage to the higher voltage once you use a conductive material to connect those two points.

Can Voltage Exist Without Current?

Yes, the voltage can exist without current. Every analogy you use to understand the relationship between the voltage and the current will tell you the same thing.

For instance, in the case of a tap, the voltage is the pressure that forces the water out. The current is the water that has been forced out of the tap by the pressure. If you open the tap and the water doesn’t come out, the pressure is still present.

If you look at a circuit, you will get the same answer. A circuit is formed when a conductive material connects two points. According to the Electronics Club, the power supply in a circuit supplies the voltage.

You still have two points in a circuit with a different electrical potential. This is why you can measure the voltage. Because the voltage is still present, you know that the current will flow the moment the switch in the circuit is closed.

On the other side of the equation, as you have most likely noted, the current cannot exist without voltage.

Why Does No Current Flow If There Is No Voltage?

Current and voltage are not the same things. People use those words interchangeably. However, in a circuit, the ‘thing’ that flows is the current. To be more specific, the current is the rate at which an electrical charge flows.

The voltage is the ‘thing’ that causes the current to flow. That is an oversimplification of a concept that a lot of people struggle to understand. But the basic gist is this. In a circuit, the Victoria State Government platform describes ‘voltage’ as the cause and ‘current’ as the effect.

You cannot have an effect without a cause, that is to say, for there to be an effect, there must be a cause. In that regard, you cannot have a flowing current without voltage. It takes a while for this concept to sink in. Though, it may become clear once you understand the elements below.

To understand why current cannot flow in the absence of voltage, you should keep the following in mind:

1). Electrons in a circuit move because a force is acting upon them. This force is created by an electrical imbalance. If you have two points, and one of them has an abundance of electrons while the other point has a deficit, those two points are imbalanced.

If you don’t introduce the conductive material, the attractive force doesn’t disappear.

2). All About Circuits compares the situation above to a water tank that is filled with water. The tank in question is raised above a container. Once the two are connected by a pipe, because of the difference in height, gravity will draw the water from the upper tank to the container below.

In the absence of the pipe, the water in the upper tank still has the potential to move. But it hasn’t realized this potential because the pipe hasn’t been added.

3). This is similar to voltage. People call voltage the force that pushes the current. However, it would be more accurate to call it the tool that people use to measure the amount of work required to move a charge between points.

It is the unrealized potential that was mentioned in the example of the tanks, or to be more specific, the potential energy. In that example, in the absence of a pipe, the water cannot flow down. But the difference in height is there, which means that gravity can still push the water down once the pipe is added.

You also have the water in the tank. It hasn’t gone anywhere. Once gravity acts upon it, the water has the potential to flow down into the lower container.

In other words, the voltage is still present. But what if there was no voltage? What if the upper tank and the lower container were on the same level and they had the same amount of water? You wouldn’t have a difference in height.

Gravity wouldn’t be in a position to act on the water. Even if the two containers were connected, the water wouldn’t flow. Because voltage describes the forces that act on a charge to move it between points, the absence of the voltage will prevent the current from flowing.

5). It is worth noting that, in many cases, voltage is generated by power sources like generators and batteries. You can probably see why the current won’t flow in the absence of those power sources.

Can Current exist without voltage?

Current is a measure of the flow of electrons. If the voltage isn’t present to cause the electrons to flow, then the current cannot exist.

Superconductors are the exception in this equation. Any current they have will persist in the absence of voltage. In other words, the current can exist without voltage. Superconductors can maintain currents for years.

Ultimately, everything comes down to the relationship between voltage and current. The voltage is the cause and the current is the effect. If you don’t have a cause, you can’t have an effect.