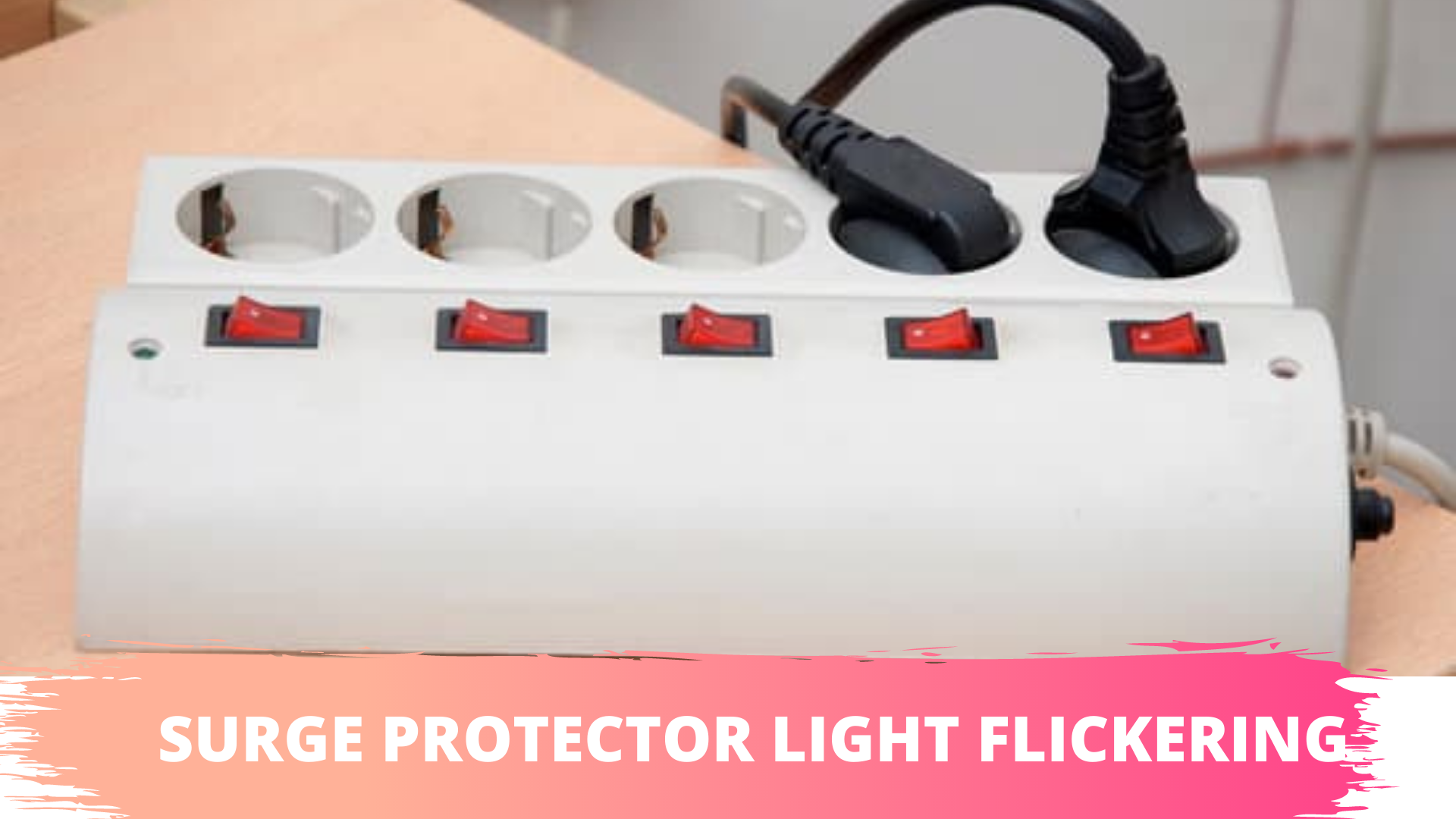 Surge protectors are supposed to sit between an electrical outlet and your electronic devices and appliances, protecting them from power surges. What happens when they malfunction? More to the point, how can you tell that a surge protector has stopped working?

Some people will encourage you to look at the lights. But what does a flickering light on a surge protector mean? What happens when that light dims or turns off altogether?

Of course, that shouldn’t stop you from trying to interpret the flickering, blinking, and dimming lights on your surge protector. As you will soon see, if you apply some tact, there are ways to make sense of the behavior of your surge protector’s light.

You have to realize that some surge protectors have several lights and they could mean any number of things, for instance:

1). You have lights that show that the surge protector’s surge protection mechanisms are working. If these lights are on, you can trust your surge protector to defend your equipment from dangerous surges, not to mention fluctuations.

2). Some lights are associated with grounding. When they illuminate, they prove that the outlet into which the surge protector has been plugged is grounded appropriately. Some lights will turn on when you plug the protector into an outlet that hasn’t been earthed.

3). Some surge protectors have lights that only activate when they encounter a problem. That includes over-voltage issues (where a voltage spike occurs) and under-voltage complications (where the voltage falls below the required level).

A surge protector that detects over and under-voltage has sensors that can identify normal voltage levels. These same sensors will take note of abnormal fluctuations, using the lights to indicate an over or under-voltage to the consumer.

4). If you have a Belkin surge protector, the Belkin website mentions an inrush/over-current mechanism that kicks in when a connected device draws excessive amounts of electrical current. The manufacturer has included indicator lights that will warn you when this happens.

You have to understand the function that each light plays. This is the only way to accurately diagnose your surge protector when things go wrong. In many surge protectors, the green light is associated with the surge protection mechanisms.

Tripplite agrees with this assessment. As far as they are concerned, when a green light comes on, it means that the surge protector is ready to defend against surges. Therefore, once that green light goes off, you can conclude that things have gone wrong and the surge protection mechanisms have stopped working.

It is worth noting that a catastrophe that causes the surge protection to stop working will most likely cause the green surge light to go off. It won’t blink or flicker, and if it does, this won’t last long.

Related post Is A Surge Protector Necessary For A Refrigerator?

The flickering power light on a surge protector isn’t as problematic as you might think.

Most power lights feature neon lamps which are highly efficient. While manufacturers love them, neon bulbs eventually wear out. Over the weeks, months, and years, their components will degrade, causing them to flicker.

Eventually, they will turn off altogether. This shouldn’t concern you. Your surge protector is still fine. You can replace the neon bulb. However, even if you don’t, AZ Central doesn’t expect the neon bulb’s absence to affect the operations of the surge protector. This is also true for an ordinary power strip.

This light serves the same purpose as a separate power switch. It tells you that the surge protector has been turned on. If the switch uses neon bulbs, they will eventually degrade, causing the switch light to flicker and blink before going off altogether. This isn’t an issue.

A dead switch light cannot stop the surge protector from doing its work.

If that red or orange light has neon bulbs, they will degrade over time. This causes them to blink and flicker. Eventually, the light will stop working. But this won’t affect the surge protection mechanisms of your power strip.

Surge Protector Red Light Not On

A lot of people panic when the red light on their surge protector refuses to go on. This is especially true in situations where the light was on but then it went off and refused to turn back on. A red light is normally a power light that comes on to indicate that the surge protector has been plugged into an active outlet.

If the manufacturers of the surge protector used neon bulbs, those bulbs will degrade over time and the light will eventually go off. This isn’t a bad thing. It doesn’t mean that the surge protector has stopped working. The protector doesn’t need the red light to perform its function.

It all comes down to the manual. If you don’t have one, visit the manufacturer’s website. They will tell you what the red light indicates and what it means when the light goes on or off.

Related Post Is A Surge Protector Necessary For A Refrigerator?

What Do Surge Protectors Do?

According to Home Depot, most of them use Metal Oxide Varistors which reduce resistance in the event of a power surge. This allows the MOVs to direct destructive quantities of electricity away from the appliances connected to the surge protector.

Because they are resistant to low-voltage current, MOVs do not affect the ordinary flow of electricity to your electronic devices. Surge protectors are supposed to defend your appliances against power surges but that doesn’t make them invulnerable.

Every time a surge protector encounters a surge, the MOV loses its potency. This is true for both small and large surges. Eventually, the MOV will wear out. Once this happens, your surge protector will lose its surge protection capabilities. This can happen immediately because of one large surge or after several weeks and months because of a series of smaller surges.

The components in surge protectors that prevent dangerous electrical currents from reaching your equipment are not immune to surges. Every time they redirect a surge, they become weaker and less potent.

If the green light goes off, it means that your surge protector encountered a surge so powerful that it destroyed the components that allow it to defend your equipment. This doesn’t always happen at once.

Sometimes, a surge protector stops defending your equipment because it has encountered several small surges over the course of several weeks and months. With each surge it redirects, it becomes weaker and weaker until it stops working.

At that point, the surge protector becomes an ordinary power strip. You can use it to power your appliances but it won’t defend them against surges.

Don’t jump to this conclusion, not without consulting the manual. As was noted before, the lights on your surge protector could mean any number of things. If the green light is the ground light and it has gone off, the electrical outlet has a problem.

It might have poor grounding or no grounding at all. Either way, you should unplug the surge protector. There is no point in acting until you know what the green light means. Otherwise, you ran the risk of misinterpreting the signs and taking the wrong steps.

The Matter of Loose Connections

People tend to respond to flickering lights by assuming that the surge protection is either defective or it has stopped working. But in some scenarios, you have loose connections and wires. This can cause both the green and red lights to flicker, blink, and dim. Loose connections are dangerous because they can cause fires.

How Should You Respond To Surge Protector Light Flickering, Dimming, or Dying?

The most effective solution to flickering, blinking, dimming, and deadlights is to replace the surge protector. This is especially true where the green light is concerned. Power lights are not an issue because they are supposed to tell you whether or not the surge protector is on.

Cyber Power has emphasized this issue.

They argue that a surge protector whose green surge light isn’t illuminated should be replaced because that surge protector can no longer defend against spikes, surges, and fluctuations.

This sounds like an overreaction but it is the correct response. A surge protector whose surge protection has stopped working is just a power strip. It cannot stop a surge from destroying your equipment, so it serves no purpose.

If you don’t know for certain what your green light does, whether or not it indicates the status of the surge protection, and if it is truly dimming and flickering, you should replace your surge protector all the same.

You cannot afford to take chances here. Some surges are so powerful that they produce tangible results. They will cause the surge protector to pop and hiss. In some situations, they will leave scorch marks.

People that observe such signs won’t hesitate to replace their protectors. Unfortunately, most surges are subtle. They do not produce dramatic results. You won’t even know that they killed the surge protector’s defensive mechanism.

The only tool you can lean on to measure your surge protector’s defensive capabilities is the indicator light. And if that light is flickering, blinking, dimming, or dead, take that as a sign that the surge protector needs replacement.

Do not wait for a surge to ruin your equipment. If you’ve had the protector for two or three years, replace it even if the green surge light is on. You shouldn’t keep these devices for too long.

You cannot interpret the meaning behind a blinking, flickering or dead light without first determining what the light does. You need to check the manual. If the light is red and it is a power or switches light, then it designed to show that a surge protector has been turned on or off.

Because such lights tend to feature neon bulbs, and neon bulbs degrade over time, the flickering, blinking, and dimming shouldn’t concern you. The power or switch light has nothing to do with the surge protection mechanisms of your surge protector.

This behavior should only worry you if the light is green or if the red light has been designed to represent your power strip’s surge protection abilities. Check the manual or manufacturer’s website for guidance before you act.