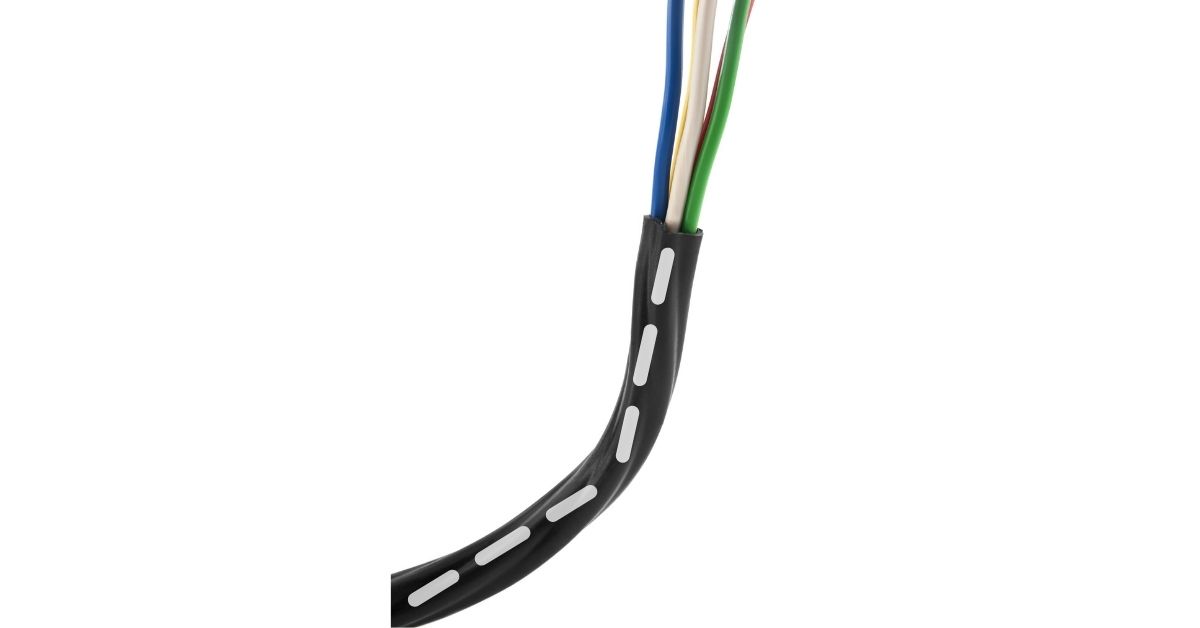 Have you ever stopped to wonder what the colors on your wires mean? Everyone knows that black wires in an electrical circuit are hot whereas the white wires are neutral. But what about the wires in your electronic devices? Does the black color on a wire mean the same thing in a fan? What about a black wire with white stripes and dashes?

What Do Solid/Striped Lines on a Wire Indicate?

The color of a wire refers to the polarity of that wire. White stripes show that the wire is the positive end. The unmarked wire is the negative.

The answer to this question is not quite as straightforward as you think. The exact meaning behind each color will vary depending on the situation. For instance:

1). In Electronics, Wire With Any Mark Is Positive

In electronic devices, every wire that has a mark, no matter the mark, is positive. Every unmarked wire is negative. You are more likely to see this in speaker cables. That doesn’t apply to every single speaker.

Cheaper wires in inexpensive speakers have a raised ridge instead of a color stripe to show a positive end.

Phone and network cables follow a similar convention. They have a wire with a solid color and a wire with a white stripe. Though, the solid color isn’t always black. Manufacturers can use blue, green, orange, and any other color that suits them.

But you cannot expect every single device to follow the scheme detailed above.

Wikihow has an entirely different interpretation. From what they have seen, stripped wires are negative. Wires with a solid black color are positive.

As you can see, that is the opposite of the scheme that was mentioned earlier where the black wire is negative and the striped wire is positive.

You cannot afford to misinterpret these colors. Connecting a wire to the wrong terminal could cause a short circuit, destroying your equipment.

To avoid mistakes, check the manual. It will clearly tell you what each color means. If you don’t have a manual, call the manufacturer. They will provide some clarification.

2). In Electricity, Black Wire Is Positive

According To Nec, Black wires are positive whereas white wires are negative while green wires are ground.

They expect manufacturers in the US to use the green color to identify the ground. On the other hand, the hot wire is black.

All About Circuits has a list of colors that the NEC expects to see in a circuit, for those who want to know more. But they have nothing to say about black wires with white striped lines.

What is the trend? What do the colors mean in most situations?

Believe it or not, many people are convinced that the colors don’t matter. In other words, you don’t have to concern yourself with identify the positive and negative wires.

The markings are for your reference only. You use them to maintain a consistent wiring scheme. You can use either wire (solid black or striped) for the positive or negative end. It makes no difference so long as you apply the same wiring scheme at each end.

A white stripe could mean a positive end in one instance and a negative end in another.

What Is the Use of Those Dashed Wire?

Dashes on a wire are similar to striped lines. In many situations, they show that the wire in question is positive. The wire with the solid color is negative. While this convention is common in speakers and cars, you should never assume that your electronic device is going to follow the same scheme.

As was noted above, connecting the wrong wires to the wrong terminals could result in a short circuit. Consult the manufacturer or the manual before you do anything.

Does Every Wire Have White Dashes?

With some speakers, the colour of the wires doesn’t matter.

As a consumer that has decided to wire the speakers yourself, your only objective is to maintain consistency. You have to use the same wiring scheme at each end. If you have decided to use the black wire as the positive wire at one terminal, you have to do the same thing on the other side.

With electrical wires in a circuit, you can use green, white, gray, and green with a yellow stripe to denote the neutral wire. This is what the NEC says. But the companies that make electronic devices do not follow a specific standard, which means that they can choose to replace white with other colors, including blue, red, gray, and yellow.

Only the manufacturer can tell you what the colors on their wires mean. If you don’t have a manual and you cannot contact the manufacturer, your only option is to test the wires.

You don’t need a manufacturer or retailer to reveal the polarity of the wires to you. If you have a multimeter, you can identify the polarity yourself. This is what you have to do:

How To Identify Positive And Negative Wires?

1). Look for the large knob on your multimeter. Turn it to face the ‘V’ symbol. This will shift the device to the DC voltage setting.

2). Take the red lead and clip it to the first wire. Connect the black lead to the other wire. Do not clip the leads to the jacket of the wires. Peel the jacket back.

4). If your leads are connected to the right ports on the multimeter, the device will provide a reading. The reading will show you the polarity of the wires.

If the reading is a positive number, the wire attached to the red lead is positive whereas the wire connected to the black lead is negative.

If the reading shows a negative number, the wire attached to the red lead is negative whereas the wire connected to the black lead is positive.

If you flipped the wires but you got the same reading, your multimeter has malfunctioned. If the multimeter doesn’t show any readings, you need new batteries. If the batteries are fine, the leads are probably faulty.

With a multimeter, you can confirm the polarity without checking the manual or talking to the manufacturer.